Elizabeth Morgan | CARICOM heads and the Order of the Caribbean Community 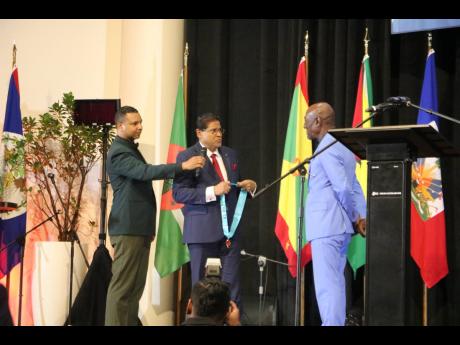 Monday, July 4, was marked as CARICOM Day. The 43rd session of the CARICOM Heads of Government Conference opened in Paramaribo, Suriname, on Sunday, July 3. I watched the recording of the opening ceremony.

The special guests for the conference were United Nations Secretary General António Guterres and the secretary general of the Organisation of African, Caribbean and Pacific States (OACPS), Georges Chikoti. Secretary General Guterres discussed the critical issues affecting the region of climate change, food insecurity, and resilience building, among others things. Secretary General Chikoti was there to discuss the restructuring of the OACPS and matters related to the post-Cotonou Agreement with the European Union, which is still to be signed. Their presence at this conference is an indication of CARICOM’s status as a region.

The new CARICOM prime ministers from The Bahamas, Grenada and Saint Lucia delivered their inaugural statements. All three spoke to the challenges facing their countries and their recognition that the region will be stronger together in achieving the desired transformation. They also recognised the need to move with urgency from talk into action, and to demonstrate unity. The prime minister of Grenada pointed to the importance of engaging the youth, as they are the future of both the countries and the region as a whole. They all saw that transforming the image of CARICOM will be critical, if it is to be seen as a body which acts in the interest of all its people. Achieving goals requires that people have belief in the project, feel pride in the region’s endeavours, and are committed to succeeding in all spheres of life.

ORDER OF THE CARIBBEAN COMMUNITY

Following the handing over of the conference chairmanship from Belize to Suriname, the opening ceremony concluded with the award of the Order of the Caribbean Community (OCC), which is the highest honour which can be accorded to nationals within the region, and which shows appreciation for their work and achievements. These nationals should be among our inspirations for highest achievement. But, like CARICOM Day, I was left wondering how many within the region actually know of the OCC? If it were a question in a random street quiz, how many would get the right answer without a Google search?

The Order was established in 1987 at the 8th CARICOM Heads of Government Conference to be awarded to “Caribbean nationals whose legacy in the economic, political, social and cultural metamorphoses of Caribbean society is phenomenal”. It was first bestowed in 1992.

As the current focus is on transformation, in an award of this type, it would be good in future to see science and technology added as a category, allowing nationals to be honoured who are making a significant contribution in research and development, promoting sustainable development through new ideas and products. Could there be more economists, who, indeed, have helped to formulate and promulgate new proposals and strategies, which address the specific concerns of small island and low-lying coastal economies. I would in future also like to hear of nominees from the private sector who have promoted inter-regional production and trade, helping to improve agriculture and industry, and making region-wide positive economic growth a reality. At the national and regional levels, there should be incentives encouraging innovation in problem-solving, with the commitment to implement. Of course, there is no point in proposing new ideas, if no one is willing to finance and implement them.

As the conference ended yesterday, July 5, I look forward to reviewing the communiqué and to seeing how the Suriname chairmanship will unfold in this time of crisis governance.