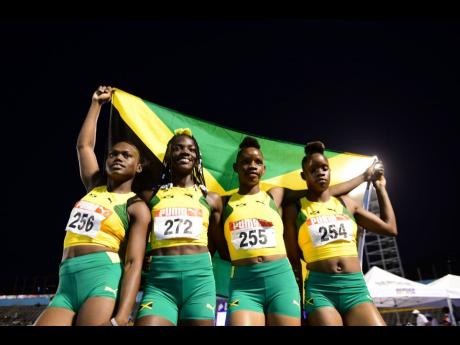 File
From left: Serena Cole, Brianna Lyston, Tina and Tia Clayton after winning the under-20 4x100 relay at the Carifta Games in April.

The Jamaica Anti-Doping Commission (JADCO), it seems, threw its staff under the bus over the CARIFTA Games record fiasco, but did not have the decency to either count or identify the bodies. We were not told who the victims were.

If Alexander Williams, the agency’s chairman, and his fellow governors do not intend that to become the lasting perception of their behaviour, they must, with urgency, provide a fuller and transparent explanation of the basis on their disciplinary action against the unnamed employees, who must undergo re-education, and of the logic in arriving at their decisions. They must, for instance, say why the board escaped scot-free in an apparent process of self-exoneration.

This issue arises from the incident last April when a quartet of female Jamaican teenagers – Tina and Tia Clayton, Serena Cole and Brianna Lyston – by the timing of the sophisticated clocks used in global athletic competitions, set a new world record in the under-20 women’s 4x100 metres relay. It emerged nearly two months later that the record was not ratified by World Athletics, track and field’s governing body. The problem was that while she presented herself, Tina Clayton was not tested for drugs, apparently because of a JADCO rule not to test athletes more than once within 24 hours.

Clayton did nothing wrong. No fault rests with her.

At the time, the Jamaica Athletics Administrative Association (JAAA) said that JADCO’s action was in contravention of the “oral and written instructions” it gave for the running of the games. The JADCO staff acted on the basis of that agency’s internal protocols which, Williams reported in June, was in place “unbeknown to me”. And presumably other board members.

That is quite possible, but ought not to be the case.

Indeed, as this newspaper noted in June, while the members of boards of organisations are not expected to know, or to be involved in, the minutiae of their operations, they must have a clear grasp of critical policy. In global athletics, the prevention of drug-aided cheating, and the regimes in support of this, have, for more than three decades, been core issues. The exclusion of whole countries from global athletics because of concerns over systemic cheating, as was the case with Russia, underlines the importance of this matter. The leaders, including the governors, of drug-testing organisations should, therefore, be fully conversant with the policies and regimes of their agencies.

It is noted that JADCO’s review of what went wrong at Jamaica’s National Stadium was done by a “special subcommittee of the board”, rather than independent outsiders. That, in this circumstance, was wrong. All board members were interested parties in this affair. They were asked to judge themselves.

Further, in announcing that implicated employees will be required to “participate in a continuous education programme on in-competition testing”, Williams pointedly noted that they had acted “in accordance with internal practice rather than explicit instructions”. He, however, did not say who gave those “explicit instructions”. Did their bosses at JADCO play any role?

Further, Williams’ statement suggested that the sanctioned staff members had escaped with merely a warning, because it was “the first workplace infraction of each employee”, who, we remind, as the public was told in June, were operating in accordance “with a directive that exists in JADCO”.

Williams did not say, either in June, or in his statement last week, when the internal directive was promulgated; by whom; or how it became the norm. He declared himself ignorant of it. It is not clear whether other board members, including the executive director, were similarly unaware.

On the face of it, the JADCO board has absolved itself of any responsibility for this affair in which four young athletes – and Jamaica, too – were directly victimised by the servants of an agency whose chairman was unaware of one of its most crucial protocols.

It would have been best if the JADCO review was undertaken by independent outsiders, rather than essential parties to the matter. There would have been greater faith in its objectivity.

At the very least, an explicit recommendation of the “special subcommittee of the board” should have been that all board members undergo training on the JADCO’s testing regime and protocols to bring them up to speed on the basics of how the organisation, for which they have oversight, operates.

Further, the board should have accepted some of the responsibility for the failure, rather than merely passing all the blame on unnamed lower-level staff and throwing them under the bus. It still is not too late.