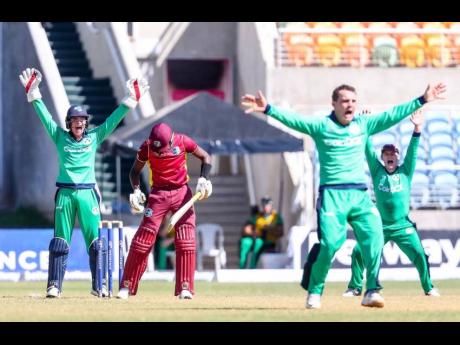 A cricket match between Ireland and the West Indies

As we reflect this week on the period of colonialism in the Anglo-Caribbean, I had cause to consider the region’s relationship with one European country which is rarely mentioned in the discussions about colonialism and slavery. That country, the island of Ireland, is now divided into the Republic of Ireland, an independent country, and Northern Ireland, which is part of the United Kingdom.

I also thought about CARICOM’s relationship with Ireland as I read about the reparations proposal (the Repair Campaign) announced by the founder and chief executive officer, Denis O’Brien, of the regional telecommunications company, Digicel. Mr O’Brien is a national of the Republic of Ireland, but Digicel, established in April 2001, is headquartered in Jamaica and primarily operates in the Caribbean.

Many of the people of European descent who came to the British West Indies (BWI) from the 1620s were from Ireland. This is particularly so in Barbados, Jamaica and the Eastern Caribbean islands, specifically on Montserrat, the little Irish colony. Ireland came under English rule from about 1169. From 1801-1922, the island was incorporated as a part of the United Kingdom. The main part of Ireland became independent from Britain in 1922, as the Irish Free State, following the War of Independence. The Republic of Ireland was established in 1937, and withdrew from the Commonwealth in 1949.

From the 17th Century, with rebellions in Ireland, Irish nationalists were deported to the Caribbean as indentured labourers. The Irish also came as plantation workers (e.g., skilled tradesmen, bookkeepers), professionals (doctors, lawyers, soldiers, civil servants), merchants, and planters. They, like others, were involved in all aspects of the sugar and slave economy of the BWI. There was a wave of Irish migrants in the 1840s, post-Emancipation. Many names of both people and places testify to the presence of the Irish in the Caribbean. I have always found it curious that Jamaicans refer to potatoes, which originated in the Americas, as ‘Irish’ potatoes.

Given the link between Ireland and the Caribbean - that both were British colonies, have English as an official language, and cultural ties through the people who settled in the region, including playing cricket - one would have thought that there would be a strong bond between the Republic of Ireland and the independent countries of the Anglo-Caribbean. That has not been the case.

CARICOM countries do not have resident diplomatic missions in Dublin. A few countries, including Jamaica, have non-resident representatives accredited to Ireland now out of London. Ireland has no resident diplomatic representative in the CARICOM region. In April 2021, the Government of Ireland appointed its ambassador to Brazil, H.E. Seán Hoy, as its first non-resident ambassador to CARICOM and to Guyana and Suriname.

This followed Ireland’s first meeting in the region with CARICOM foreign ministers in May 2019. Prior to this, meetings between CARICOM countries and representatives of the Government of Ireland would take place mainly at the United Nations in New York and in Brussels, seat of the European Union (EU) and the African, Caribbean and Pacific (ACP) group of countries. Ireland, like Britain, joined the European Economic Community (EEC) in 1973.

Ireland was thus involved in the negotiations of the ACP-EEC Lomé Convention in 1975 and all subsequent ACP-EU agreements, including the most recent, post-Cotonou Agreement. Development assistance to the Caribbean would mainly have come through the European Development Fund. There is no indication that Ireland had a robust bilateral development assistance programme with Caribbean countries, although it has given aid.

In trade, the CARIFORUM-EU Economic Partnership Agreement (EPA) covers trade between Ireland and the countries of the Caribbean ACP Forum (CARIFORUM). The figures reviewed show that total goods trade between the CARICOM countries and Ireland has been quite low. World Bank 2020 figures, estimated, indicate that CARICOM countries imported about US$60 million in goods from Ireland and exported about the same value.

In services, Digicel’s establishment resulted from Jamaica’s liberalisation of its telecommunications sector at the World Trade Organization.

IRELAND’S 2022 STRATEGY FOR LATIN AMERICA AND THE CARIBBEAN

Surprisingly, Ireland has not had strong relations with most countries of Latin America and the Caribbean (LAC). Ireland’s main LAC partner has been Argentina, which has the fifth-largest Irish community in the world. An embassy has been there since 1947. Ireland is now expanding its interest in the LAC, increasing its number of embassies in Mexico, Central and South America.

In February, the Government of Ireland launched its ‘Strategy for Latin America and the Caribbean to 2025’, aimed at strengthening relations, building mutually beneficial partnerships to expand its global reach. Referring to the Caribbean, it states that, as an island, Ireland has a particular affinity with the Caribbean as Small Island Developing States (SIDS). It states also that Ireland shares a constituency with a number of Caribbean countries at the World Bank and International Monetary Fund. Among other things, Ireland wants to focus on the implementation of the UN 2030 Agenda for Sustainable Development and the impact of the global pandemic.

There is need for further study of the relationship with the Republic of Ireland. It seems some academic work is being undertaken in Ireland at universities, such as Trinity College, on the historical relationship with the Caribbean. Work needs to be done here in the Caribbean, not just on history, but on the scope for strengthening relations with Ireland at the bilateral, regional, and ACP-EU levels, especially with Brexit.