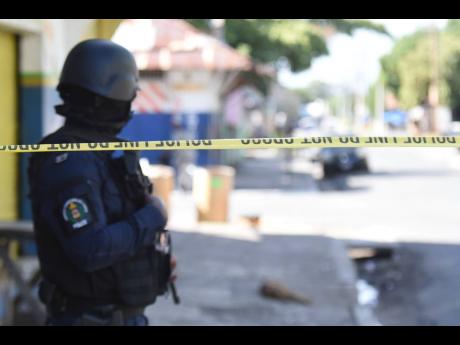 File
It goes without saying that in the face of this crime crisis in Jamaica, innovation should be encouraged.

A sense of despair and hopelessness hovers over our beloved nation. But here’s the thing. We are agreed on a number of self-explanatory facts and these are as follows:

It cannot continue like this if we are to save our beloved nation. The responsibility for resolution, reform and rectification falls squarely at the feet of leadership. Successive administrations have not been able to make any significant impact on the high levels of crime, in particular gun murders that have plagued this nation up until the present time.

Most Jamaicans see a solution in terms of policing our way out of the problem by the imposition of drastic measures to deal with crime. Unfortunately, this has had little or no effect on the problem over the last 30 years.

Special police squads have been engaged as part of the plan. Readers would no doubt recall the various squads. These include Echo Squad, Ranger Squad, Eradication Squad, ACID, Operation Intrepid, Special Anti-Crime Task Force (SACTF), Crime Management Unit (CMU) and Operation Kingfish – all of which have done little to stem the runaway rate of murder and high levels of violence in our country.

The view has been expressed in high places that to successfully tackle the murder problem, some of the fundamental rights and freedoms which we have guaranteed to our people may have to abrogated, abridged or infringed.

These facts suggest that there is a real need for innovation rather than reaction to address this crisis. The thinking that government can call upon public support to assist in a national crisis is not new.

In 1675, the British Royal Observatory was formed with a view towards improving navigation at sea. This was essential for the naval expansion of the British Empire which relied heavily on its navigational capacity to facilitate trade and to grow its influence on world affairs at that time.

There was great dissatisfaction with establishing the prime meridian of the world longitude 000. After 30 years of trying to address the problem, the British government turned to the scientist of the day, Sir Isaac Newton, and the comment expert Edmund Halley for advice, and in 1714 the Act of Longitude was passed, promising a prize of 20,000 pounds for anyone who could solve the longitude problem. The comparable figure in today’s terms would be 30,000,000 pounds.

The prize changed the way that the problem of longitude would be addressed. Anyone who could find that solution would be entitled to claim the prize.

In 1737, a village carpenter by the name of John Harrison shocked the scientific community when he discovered a clock that was capable of keeping superb time at sea despite the rolling of the vessel. The point is that innovation can come from the most unlikely source.

It goes without saying that in the face of this crime crisis in Jamaica, innovation should be encouraged.

We are well aware of the efforts made in Jamaica to solve the crime problem. Quite apart from the various police initiatives, the innovation of the Private Sector Organisation of Jamaica (PSOJ), under the leadership of the late Gordon ‘Butch’ Stewart, formed the Crime Stop Initiative in 1985.

Public alarm at the mounting levels of crime in Jamaica in the 1980s prompted a group of leaders from the private sector led by Stewart, the then president of the Jamaica Hotel and Tourism Association.

Mr Stewart’s words at the time in an open letter in October 1987 appealing to the government and to the political parties for the re-establishment of the rule of law and security of the people are worth repetition, and I quote:

“The law-abiding majority of Jamaica” the letter stated, could “not allow the nation to be taken over by the gunmen, political thugs, robbers and drugs barons”.

Those words could be repeated today, and the cast of actors expanded to include gang leaders and scammers.

The Crime Stop programme launched from the offices of the PSOJ on September 5, 1989, with the private sector providing matching funds to the government’s contribution to the initiative.

With all the assistance that the Crime Stop programme provides in helping the police to prosecute wrongdoers, it has not had the effect of stopping crime which has escalated to the point where we are confronted with a murder rate of some four lives being lost daily in Jamaica land we love.

All the prizes offered to solve the problem have been dwarfed by the ‘Advanced Market Commitment’. This was a prize, worth US$1.5 billion offered by the Bill and Melinda Gates Foundation, aimed at stimulating initiative for pharmaceutical companies to develop a more effective vaccination against pneumococcal diseases. These diseases affect the very poor and kill up to one million young children annually.

There is no incentive for the pharmaceutical companies to invest in these drugs as they would not be expected to reap much reward even if they had a patent. Because of that prize, children in Nicaragua received prize-funded drugs in 2010.

The thinking is that some kind of financial incentive to the innovative Jamaican or global thinkers might just be the solution we need to solve this somewhat intractable problem of crime, violence and gun murder in our country so that we can have a secure and cohesive society.

The solution, when it is found, whether by prize incentive or any other method, will provide for all Jamaicans, a place of choice to live, work, raise families, do business and sleep all night with our doors open.

Leonard S. Green is a senior attorney-at-law and the present president of The Advocates Association of Jamaica. Email feedback to columns@gleanerjm.com