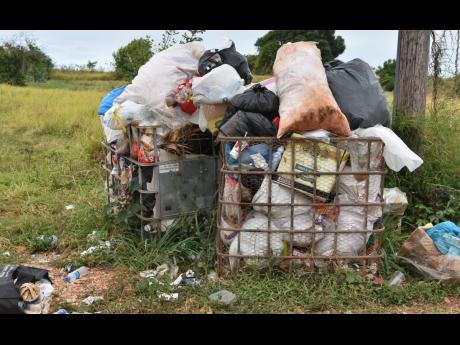 File
In this June 2022 photo, the main road from Junction to Treasure Beach in St Elizabeth is seen littered with piles of garbage.

There’s no keeping the Old Ball and Chain quiet.

The bad news is, Old BC believes in the superior practical intellect (which she calls “common sense”) of women over men, who she sees as lumps of clay that God put women on Earth to mould into something resembling useful. She says, “look how God was forced to insert Eve into His grand plan when Adam proved lost without a woman.”

Anyway, Old BC is off on another of her rants, and I can’t separate her fingers from my keyboard.

Old BC: Old Grey Balls can say anything because he’s never had to do a housewife’s work. I’ve often said if a housewife were to be minister of finance, funds would be spent so as to maximise their use. Every housewife knows that it’s all about priorities. Yes, it would be great if there were enough funds to allocate to every area and so have a perfect Jamaica. Unfortunately, that’s not the case. Therefore, we must prioritise what’s most important.

Old GB: Do you plan to make a specific point anytime soon?

Old BC: YOU have a nerve. You NEVER say anything in less than 5,000 words. So, where am I going? The national census! Yes. It would be great to have the information Government seeks. However, wouldn’t it be more important to have functioning healthcare; an education system that perfects basic skills in school, like reading, writing and critical thinking; and a security system that can actually provide security?

Old GB: You’re comparing apples with pears (can’t say ‘oranges’ in today’s tribal environment). The Health budget is $93.6 billion. Education budget is $123 billion. The census costs $2.4 billion, or 0.01 per cent of total non-debt expenditure. And this is a data-gathering exercise to inform policy. PM says, “If we’re going to make policies on behalf of the people, we can’t just make policies on emotion [or] what we feel is popular. We have to make policies on the facts... “.

Old BC: Look here. Andrew knows I like him better than most, but that’s rubbish. Don’t tell me you need to know how old I am to have schools. We already know we don’t have enough teachers. We already know patients outnumber the required patient-doctor ratio in all hospitals across the island. We already know that when we call the police, it takes forever for them to reach the crime scene because there aren’t enough vehicles. When Government has delivered basic services for which tax payers pay heftily then we can worry about a population census. BTW, the $2.4 billion spent creating jobs for the census could easily be directed to collecting garbage off the streets (which create health issues in communities), which might take some pressure off hospitals. If Government doesn’t know where these communities are, maybe Ministers could enter their air-conditioned SUVs, driven by their security details (paid in full by tax payers), and take a drive anywhere. I’m sure they’ll be able to locate areas of need without spending $2.4 billion on a census!

Old GB: DWL. Somebody has put ants in your pants. You really don’t think Government should have a comprehensive count and demographic categorisation of the population?

Old BC: I know I’m very simplistic, but does it require billions of dollars to be spent on finding out info about its population before spending the ha’pennies we have in the most important places? Maybe I’m just not educated enough or smart enough to understand the benefits of spending what we cannot afford on items that aren’t absolutely necessary.

Unlike many macho misogynists, I know how to get the last word.