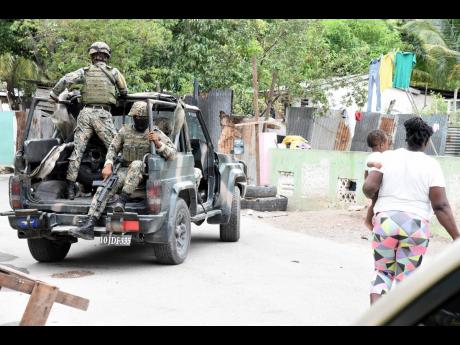 Ian Allen
In this June 2022 photo members of the Jamaica Defence Force are seen patrolling the streets in Homestead, Spanish Town, St Catherine.

The slump in people’s confidence in the Jamaica Defence Force (JDF) was predictable and ought to concern policymakers on several fronts, not least of which is that developments point to deepening stresses on one of the few remaining bastions of trust in the country. And it cannot be good for any society when people believe that they have nothing to believe in.

The situation calls for an urgent review of the army’s role in Jamaica’s internal security arrangements, especially its increasing use in regular policing operations. Further, it would be timely for the chief of defence staff, Rear Admiral Antonette Wemyss Gorman, having had several months on the job, to publicly disclose her strategic vision of the JDF, beyond the cookie-cutter offerings of when she assumed office in January. Current developments also suggest the need for greater transparency from the JDF of its internal process when its members fall into conflict with the public.

An opinion survey, conducted in July and published by this newspaper on Tuesday, found that only 25 per cent of Jamaica reposed a high level of confidence in the JDF. For the remaining 75 per cent, confidence in the military was little, or none (26 per cent).

These figures represent a precipitous reversal of the attitudes of Jamaicans towards the JDF, compared to views captured in a range of earlier surveys. The army used to be viewed far more positively than any other Jamaican institution.

For example, in its biennial surveys on attitudes to democracy in the Americas, Vanderbilt University’s LAPOP research laboratory tracked the trust people reposed in militaries across the region, scoring confidence levels on a range of one to 100. Over the decade up to 2017, except for 2008, when it was 56.8, the JDF’s score was consistently over 60, reaching a high of 68.4 in 2012. Further, although tolerance for military coups to remove corrupt governments has declined in the Americas, Jamaicans remained among the most welcoming of the idea. Forty-six per cent said, in the 2021 survey, that they would endorse a coup in such a circumstance, suggesting, among nearly half the country, high confidence in the military.

By contrast, over the same period, trust in other institutions, including political parties, has been low. At its highest in 2008, only 27.5 per cent of Jamaicans, LAPOP said, trusted political parties. The proportion was a low of 18.5 per cent in 2014.

Another useful proxy for comparison between the JDF and other institutions is Transparency International’s 2019 corruption barometer for the Americas. In Jamaica, 44 per cent of the adult population felt that most, or all, members of parliament were corrupt; 39 per cent had the same view of government officials; and 49 per cent of the police.

Cynics might argue that the recent Don Anderson survey holds a positive, in that an unpopular military would be disinclined to trade the barracks for government offices, and that a junta, in these circumstances, would not find a warm welcome from Jamaicans. That proposition is no guarantee of democracy. Indeed, unpopular militaries are often the ones that intervene in politics and upend democracy.

What counts most is the philosophy of the military, especially their willingness to adhere to constitutional norms, embrace civilian oversight, and to respect constitutionally enshrined fundamental rights and freedoms for individuals.

The army’s role in this scheme of arrangements of the State is to protect against external threats and to be responsive to extraordinary internal events and emergencies that are beyond the scope of civilian agencies. What the JDF is not, is a constabulary, whose members are expected to police the consent of the public.

The JDF has, for the most part, fulfilled its previously defined role well, building a reputation as an efficient, skilled, elite institution. Commenting on the high level of trust the JDF enjoyed, the LAPOP 2012 report said: “The Jamaican military has not been intensely involved in day-to-day, involuntary contact with citizens and has a record of being more restrained in the use of lethal force. These factors, among others, may explain the difference in the respective levels of confidence and trust … (compared with the police) over the years.”

In recent years, as the Government has increasingly used the declaration of states of emergencies as a crime-fighting tool and soldiers have been heavily relied on to perform quasi-policing duties, contacts and frictions with citizens have risen, such as the May altercation between a soldier and resident in the Denham Town zone of special operations, which Prime Minister Andrew Holness felt was guided by some hidden hand.

But as we argued then, “the longer the army stays on the road doing policing/security duties, the greater the likelihood of its members coming into friction with citizens”. A professional military is part of the hub of democracy. If citizens lose trust in all the State’s institutions, that is corrosive on democracy. The JDF, too, must not be allowed to go that way. A review of what it is being asked to do is in order.