Kristen Gyles | Who will be made to sacrifice? 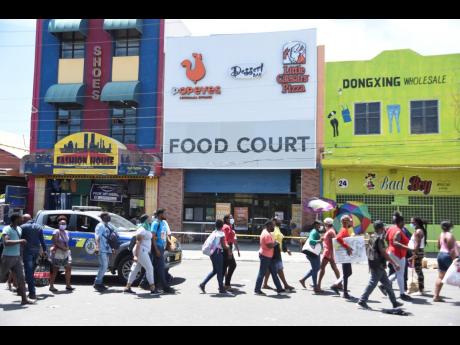 File
In this September 2021 photo, people walk past a scene of crime in downtown Kingston where a vendor was shot.

It is likely that within the past week, at least one of Jamaica’s many murderers was able to dodge the police, and will get the chance to claim another life, simply because someone somewhere who knows something doesn’t want to talk. It is likely...

It is likely that within the past week, at least one of Jamaica’s many murderers was able to dodge the police, and will get the chance to claim another life, simply because someone somewhere who knows something doesn’t want to talk. It is likely that a taxi man who engages in the business of abducting and robbing people was able to slip through the hands of law enforcement, because someone somewhere who knows something will not say what they know. It is not always a relative or a friend. Sometimes it is simply someone who happened to be at the wrong place at the wrong time, who happened to come in contact with the wrong information.

Crime Stop may never be able to pry their lips open and no amount of moral suasion or lecturing will necessarily get them to come forward with what they know. If it becomes known that they know something, they will deny it as fervently as possible to convince even themselves that they are clueless.

Why? No one wants to be the sacrifice. No one wants to be the face of the next viral missing person poster and no one wants to be the next dead body found decomposing. Many Jamaicans have witnessed things – theft, bribery, murder, and the like. And even where these have not been personally witnessed, many persons have heard conversations they were not supposed to hear and have seen faces they were not supposed to see. But, as they perceive it, the choice is simple – become an informant and live like a fugitive for as long as you’re fortunate enough to live, or keep your mouth shut. As we’ve all heard, “Informer fi dead”, right?

Corruption is killing us, literally. Until we can address this issue, especially within law enforcement, the cooperation of the citizenry in crime-fighting will always be severely limited. Until crime-fighting becomes a nationwide, all-hands-on-deck endeavour, the criminals will continue to reap success.

Many Jamaicans have very little confidence in state protection should they choose to act as a witness or informant, and generally, people just don’t know who to trust. Many really want to help, but also really, really don’t want to die. Very few will willingly choose to put their safety on the line.

But, to make matters worse, of the few who may have been inclined to offer themselves up for martyrdom, a significant portion think of the likelihood of any justice being served anyway. They make up their minds to stand up against what is wrong and are willing to face victimisation if necessary, but then they think about the ‘after that’. They think about the information they provide being conveniently forgotten by a corrupt cop, or being considered inadmissible in court. They question whether the justice they are sacrificing themselves for will even be served. Would it then be worth it?

All it takes is for the criminal to have the right ‘link’ on the inside keeping them informed of the very information being provided, and before you know it, it’s the age-old cat and mouse chase between the police and the criminal. Then, not only will the criminal remain at large and end up murdering more people, but may choose to pay the chatty-mouth informer a very unfriendly visit.

These are real fears that seem to be conveniently ignored by some people who blame the citizenry for the uptick in crime.

For example, careless drivers who ignore red lights are a danger to society and should be fined, until we are the ones caught speeding into eternity, or caught driving without a seat belt. Suddenly, we have a change of opinion and the policeman can buy himself a drink to forget the blunder.

To continue, people who try to bribe court jurors must face the full force of the law, but paying a small ‘fee’ to get through the driving test successfully won’t hurt anybody. This is the thinking of more than just a handful. So again, how many of us actually want to address the corruption problem?

Hopefully, enough. Because corruption is largely a cultural matter. We have built up a culture in which corruption is seen more as a matter of ‘working smart’ than anything else. The culture thrives, too, because when our friends engage in corruption, we never see it as being nearly as egregious as when politicians, police, pastors and other people we want to dislike do.

But aside from the fast-spreading culture of corruption, we need to at least give greater focus to addressing corruption within the police force and within the court system. This is perhaps the most encouraging way of getting persons to cooperate with the police. Pontification and lecturing no longer works. People will not be shamed into working with the police because they know the persons talking down to them would act in their own interests if given the chance. Many Jamaicans do want to play their part in crime-fighting, but even that is hard when there is a fear of corruption in every aspect of the justice system.