Editorial | What was the AG’s advice on Lt Gen Meade’s appointment? 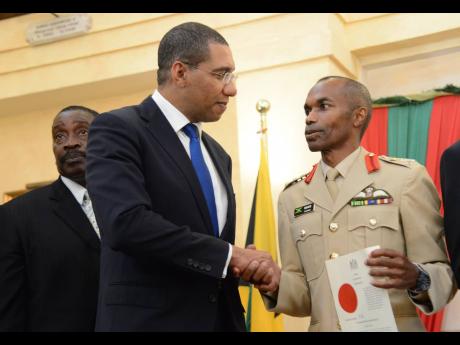 The legal faux pas over Rocky Meade’s appointment as Jamaica’s Cabinet secretary, and his retreat even before he started the job, again raises serious questions about the approach to certain aspects of decision-making in the Holness administration, including, in this case, what Derrick McKoy knew about the engagement and when he knew it.

In other words, was Dr McKoy, the attorney general, the Government’s legal adviser, consulted on the matter by Prime Minister Andrew Holness before he acted on the matter? At the same time, the Public Service Commission (PSC), which is responsible for the rules-based oversight of the public service, owes Jamaicans its interpretation of what, if anything, went wrong, and if it took legal advice before advising Governor General Patrick Allen that Lieutenant General (Lt Gen) Meade was eligible for the job.

Indeed, an honest and transparent review of the matter is necessary to prevent the likelihood of its recurrence, and attendant embarrassments.

Until his retirement in January – and replacement by Rear Admiral Antonette Wemyss Gordon – Lt Gen Meade was chief of defence staff of the Jamaica Defence Force (JDF). Even people who disagree with some of his ideas on national security matters and are uneasy with former military officers assuming several key posts in the public sector, do not question Lt Gen Meade’s commitment to Jamaica, his intellect or his competence. And he clearly enjoys the trust of Prime Minister Holness, with whom he shares a belief that the use of states of public emergency is the most effective tool, at this time, for tamping down crime in Jamaica.

Very few people, in the circumstance, would have been taken aback at last week’s announcement by the Office of the Prime Minister (OPM) of Lt Gen Meade’s appointment as Cabinet secretary and head of the public service. He was to succeed the retiring Ambassador Douglas Saunders from October 1.

“I am humbled and honoured to be considered for this critical role,” Lt Gen Meade said, “I pledge to further the positive evolution of the public service for the benefit of the wider society.”

The announcement, however, was immediately greeted with questions of the constitutionality of the action, particularly whether it breached Section 92 (1) of Jamaica’s Constitution. That section says: “There shall be a Secretary to the Cabinet who shall be appointed by the Governor-General, acting on the recommendation of the Prime Minister, from a list of public officers submitted by the Public Service Commission.”

"In order to be appointed to the post of Cabinet secretary, that person should be a public officer," the lawyer and constitutional scholar Lloyd Barnett told this newspaper. “So, on any basis, if he (Lt Gen Meade) is no longer a public officer, then he would not qualify for the appointment.”

Other constitutional experts have not only supported Dr Barnett’s argument, but questioned whether the JDF, which is governed by a Defence Board that is established by statute, could be properly defined as being a part of the public service, whose oversight commission is rooted in the Constitution.

It should be clear that, fundamentally, the questions raised about Lt Gen Meade’s appointment were constitutional, rather than political.

In an obviously deliberately framed statement announcing his withdrawal, Lt Gen Meade said that although he was invited by the PSC “to be considered for the post while I was still a serving officer, the current public discourse does not provide a sufficiently settled environment for the assumption of such a significant office”.

What the statement does not say is whether the contractual arrangement/appointment was consummated while he was still chief of defence staff and whether Lt Gen Meade, despite opting for withdrawal, believes that legal opinion is on his side. Which is why the public intervention by Dr McKoy, to whom the Government should look for such opinions, is necessary.

When Dr McKoy was appointed attorney general in January, the intention, ostensibly, was two fold: to return the post to a non-political person; and to free the then incumbent, Marlene Malahoo Forte, in her newly created ministry, to concentrate on legal and constitutional reform. But most analysts felt that there was a third undeclared reason, to cauterise a string of embarrassments and outright defeats the administration has faced over constitutional questions. These range from Prime Minister Andrew Holness’ attempt to put Chief Justice Bryan Sykes on probation before his permanent appointment to the post, the direct defeat in the courts over a law for a mandatory national identification system, and legality of regulations governing recent states of public emergency.

Against that backdrop, we expect that Dr McKoy was consulted immediately when Prime Minister Holness contemplated Lt Gen Meade’s appointment to the Cabinet Office. Does Dr McKoy, therefore, hold that the ‘unsettled environment’ in which Lt Gen Meade found himself in was manufactured and without constitutional basis?

Further, the PSC should clarify whether in making important decisions, such as this one, it seeks the input of its in-house attorneys, if it has any, and whether their positions are subject to review by the attorney general. The same question applies to Jamaica House, the prime minister’s office.

Separately, it would be probably useful if the attorney general’s chambers organised a series of constitutional seminars for members of the Cabinet, but on the specific declarations of the document and the philosophy behind constitutional rule in a liberal democracy.