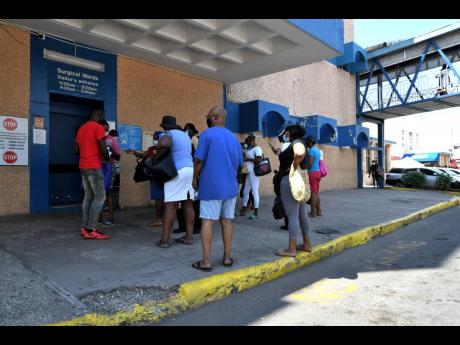 File
In this March 2021 photo, people are seen waiting at the Kingston Public Hospital.

On Thursday, September 1, The Gleaner quoted the mayor of Spanish Town, His Worship Norman Scott, when he stated that, “… the time has come for the Government to revisit the no-user-fee policy in Jamaica’s public hospitals”. As a medical practitioner, I know of and see the frequent, unnecessary suffering and deaths caused by this horrible policy. For many years, I have repeatedly and openly advocated and begged several government administrations to change the no-user-fee policy, but I’ve been whistling in the wind.

They have not satisfactorily addressed the innumerable complaints from suffering (poor) patients and medical staff. They have sidestepped the deep concerns, lamentations and supplications of distraught medical doctors over the many years. But you know how the system works…since Mayor Norman Scott is a politician, I hope that they will give a listening ear to his request. It is a very dangerous thing when decisions are made concerning the health of a nation, based on political expediency and campaign promises. Such was the case regarding the no-user-fee policy.

In my professional life, as far back as I can remember, our public healthcare system was noticeably substandard. There was always shortage of staff, working equipment, supplies and medication. Even before the institution of the no-user-fee system, patients were meeting hell at public medical facilities. Poor people were suffering and dying because they could not afford private healthcare.

Then in 2007, someone, ostensibly a political strategist, realised that most patients in the public health system were not paying their bills to clinics and hospitals. Since only 11 per cent were paying their bills, it was assumed that writing off whatever was not being paid would represent an insignificant loss of income but translate into a massive uptick in political points for the upcoming general election.

The manifesto promised, “Unrestricted, universal access to health care”. Section 27.5 of the document read, “Free public hospital care: Abolish user charges at all health facilities including public hospitals.” This was accompanied by a promise of a raft of healthcare upgrades. Then, on April 1, 2008, (yes, All Fools’ Day) after 24 years of user fees in public hospitals, the Government of Jamaica introduced a no-user-fee policy, applicable only at all public health facilities across the island. The promised raft of healthcare upgrades never materialised.

Interestingly, the discarded funds from the 11 per cent that paid their medical bills added up to a whopping $1.7 billion [2007] annually! The shock to the Jamaican public healthcare system was immediate, severe, and devastating. Our public health system went into a nosedive. I (personally) know of several patients who suffered, and some died as a direct result of this politically expedient move.

Amid the cacophonous cries for help from the suffering public, and the torrent of complaints from medical staff, the then minister of health stoutly defended the decision by quoting from the United Nations 2010 Report on the World Social Situation. The wily minister only made public the section of the report that advocated no user fees for developing countries like ours.

However, he failed to publicise the very next, important paragraph that stated: “At the same time, removing fees will entail additional resource requirements. It is, therefore, important to ensure that additional funding is available for countries that want to remove fees. To support the permanent removal of user fees and to ensure that the poor benefit from such actions, fee removal needs to be part of a broader package of reforms that includes increased budgets to offset lost fee revenue.”

Sadly, Jamaica did not have, and still does not have any means of offsetting those lost fees. That $1.7 billion (2007) annually would be about $3.06 billion annually today. Imagine how much we could do for our sick and suffering citizens with that money. Things like the justice system, national security and healthcare should never be influenced by politics.

Some emergency room (ER) patients must sit in chairs for days, waiting on the availability of hospital beds. A new intermediary ward has emerged where patients are in-between the ER and the ward. The emergency room doctors are now forced to fill the dual role of ER doctor and ward doctor until the patient gets admitted, dies, or takes their own discharge and hope for the best at home.

Many outpatient clinics are shuffling and rescheduling patients in a scramble to assist some. I see a lady who is in overt heart failure. She is constantly short of breath, unable to lay flat, her legs and abdomen are very swollen. Despite her horrible state, she was not admitted; instead, she was just given a clinic appointment for August 2023. As they say, Jamaica is not a real place.

The ‘freeness’ offer was the hook, and now our politicians fear eroding their power base, even though the power base is literally dying because of the freeness mentality. There is an unfathomable tenacity regarding revisiting the ‘freeness’ promise. Every single aspect of healthcare is being negatively impacted by the lack of funds.

I hope that they put people before politics; reinstitute the user fees; and allow those who can afford to pay to do so (as pertained before the political decision to eliminate them). We need the income to reduce the suffering of our citizens and to save lives.