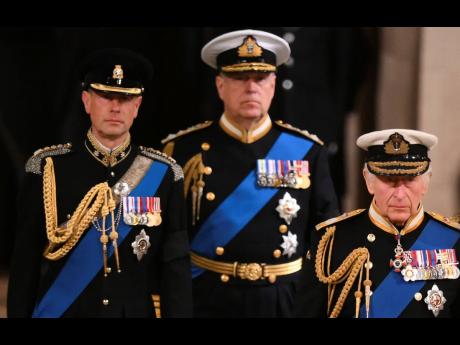 I’m beginning to understand why there are still so many Jamaicans who feel safer under the protection of King Charles, his Privy Council and other colonial trappings. Stack up some of the rantings from national leaders last week against the presumption that we are prudent and mature enough for citizens to repose trust in local institutions and the personae of governance.

We are grateful to Lieutenant General Meade for ducking out of a certain embarrassment in the constitutional court had he followed the Prime Minister. But who can fail to notice the multiplying instances of bad legal advice which habitually ties up this administration. This is no good for confidence and trust. The worst thing that can befall any minister is to have a lawyer who tells you what you want to hear.

Of course that assumes that the politician still believes in the rule of law. That is becoming doubtful. Mr. Holness, His Majesty’s Privy Counsellor, in promoting a gun amnesty, is heard to say that he prefers to catch “badman with it (the gun)” rather than have them hand it in. Really Sir? So why have the amnesty? And please, stop caricaturing people who oppose mandatory sentences as emboldening criminals. To the contrary, we are in favour of judicial discretion, a vital element of the rule of law that you are sworn to uphold.

Then came the increasingly desperate Horace Chang who goes wild, way beyond H.L. Shearer’s “recite no beatitudes” rash outburst of yesteryear and sanctions the already widespread practice of extra-judicial executions (how many more than the 200 plus that we have in a mild year will satisfy?) by his “shoot to kill” licence.

We saw it coming. Their answer to blood-thirstiness is to shed more blood. It is established again that the lust for blood is not confined to the criminals.

Then there was the sour-sounding chairman Bobby, clearly happy to be freed from the Cabinet straight-jacket or the constraints of over-familiarity with the law, proposing to grease up the rusty gallows with a fervour which would make Mordecai envious.

Some of our leaders are out of ideas, often ill-advised and increasingly prone to trifle with the constitution. They end up on the side of Eyre and Baron von Kettleholdt rather than Sharpe, Bogle and Gordon, who, be it remembered, were also accused of being soft on criminals.

The recent CXC results are a debacle. We have been doing some analysis of outcomes in a range of high schools and the passes in English and mathematics are disgraceful. We have normalized this self-inflicted wound, this permanent cramp on any hope of sustained national growth, and are continuing to promote and graduate thousands of students who can’t read or compute and lie to ourselves that two years of sixth form can correct 11 previous years of mis-education. A fuller assessment of the results will follow.

I am now aware that there is no plan to advance the academic and financial upgrading of early childhood teachers this year. This is a frontal blow to a crucial recommendation of the Patterson Report.

Add to that the easily-ignored cry from those providing the school lunches that $120 per day can’t buy half a patty now. So add hungry-belly to the deficit of COVID-19, the drain of teachers to the anathema of parental contributions and declare prosperity and free education for all! More big madness.

Truth be told, there is widespread mistrust in local leadership and institutions that many do not feel safe and either lapse into cynical apathy, flee, or have recourse to the remembered certitudes of the imperial past.

Similar thinking, though far less justifiable because of the independence and integrity of both local and regional courts, encourages the thinking of those who would hang on to the Privy Council as our final arbiter of law, even when they are anxious to cut our navel string.

Further down the Damascus Road in West St Mary, MP Montague, for the first time at last, supports fairness for members of Parliament in relation to their salaries, pensions and constituency enablement. He is right on every count, but I suspect his proposals will get no more traction than my own similar pleas in 2019 which his government ignored then.

We politicians have taught the society to so hate us by our own self-contempt, that many veterans who have served sacrificially, are denied health insurance and a decent pension in their declining years and some, even at the level of prime minister and deputy prime minister, have to come shame-facedly to their successors to beg money to cover medical bills and even household expenses.

As we recognise King Charles (not Pearnel) as king of Jamaica and pray fervently for his rule over us at every sitting of Parliament, some MPs can’t allow themselves to look beyond the bewitching trappings of state power to ask themselves why crave that power if so little positive can be achieved by it.

The present system works poorly despite all the frills, ‘speaky-spokey’ and shouting. It is unjust to those who serve and bear responsibility. Bobby is right this time. We are numbed to believe this is the best we can do. It is not. It is a sin to normalise unfairness, inefficiency and advantage-taking.

And lastly for now, the news last week, again likely to be ignored, that Jamaica is importing multiples more in value than we are exporting. What frothy delusion prevents us from addressing the transformation of our economy which these statistics impel? Do we really believe that remittances, tourism and BPO can sustain a more equal and productive society? Madness again.

Big up the prospect of a bamboo industry! At least they will be trying to use an undervalued natural resource to earn foreign exchange without raping the environment.

We can do so much better if only we were sane enough to let ourselves thrive.