Gordon Robinson | Ask not for whom the bell polls 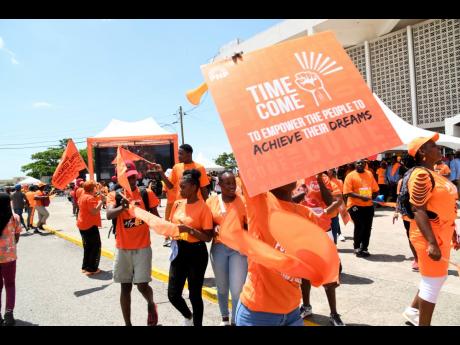 Rudolph Brown
PNP supporters at the party’s 84th conference at the National Arena in Kingston on Sunday, September 18.

Thirteen months earlier, under Portia “Do-I-Look-Like-a-Loser” Simpson-Miller, its most charismatic leader since Michael Manley, PNP suffered a shocking general election loss every pollster and pundit save one failed to predict. Peter Phillips inherited a fractured party with seeds of chronic disunity sown from 2006 when P .J. Patterson retired and there followed a mad scramble for succession.

As it was when Joshua retired in 1992, PJ ensured tat party interests trumped national constitutional ideals by resigning as party leader while remaining PM until a new party leader was selected. Thus Jamaica continued bastardised adaptation of Westminster where we recently saw Boris Johnson do likewise. The difference is that England has tried its best to democratise Westminster hence the new Conservative Party leader was chosen by a vote of all party members.

In 2006, as in 1992, a select few “Delegates”, after a fractious contest, chose PNP’s next leader and Jamaica’s next PM. Internal grumbling began instantly. When Portia exposed weak political strategy (or poor choice of advisers) regarding General Election timing, the PNP lost. She refused to accept the national rejection and resign thus inviting an equally ill-timed challenge by Peter Phillips that deepened internal strife.

The JLP proceeded to gift the PNP the 2011 elections with its “Dudus-Defence” strategy, but Portia returned the favour in 2016 by unceremoniously underestimating her opponent. Even after her second national rejection, she took a year to let go.

Within two years of his rise (oops, sorry, promotion) to PNP president, national polls showed the PNP in dire straits with only 18 per cent of the vote against the JLP’s 29 per cent. Then the PNP lost a by-election in a PNP stronghold. This was eerily similar to its 2001 North-East St Ann by-election loss, but the PNP was then a united government under a leader whose political acumen and accomplishments were legendary. It recovered.

In 2019, Peter Phillips, albeit an accomplished political activist, parliamentarian, and Cabinet member, could boast neither P. J. Patterson’s résumé nor Portia’s charisma and was a neophyte as party leader. So the 2019 by-election loss, combined with PNP’s rock-bottom poll standings, widened intra-party rifts.

On June 9, 2019, Peter Bunting announced an unprecedented challenge to a sitting party leader before that leader faced the electorate. The PNP sank to a new low. Bunting (as quoted by Caribbean National Weekly):

“… since becoming president, [Phillips] hasn’t implemented a single transformational initiative within the party and is just not seen as the right person for this time.

There’s also a growing acceptance/resignation in the general public and amongst various stakeholder groups, including party membership and supporters, civil society, and private sector leadership, that PNP under Dr Peter Phillips’ leadership cannot defeat JLP in a general election ... .”

He believed his challenge to be “in the best interest of party and country”.

His challenge lost but deepened what already seemed a bottomless pit of divisiveness; cost PNP a walloping in 2021 elections (including Bunting and his non-garrison supporters losing their seats), after which Phillips immediately gave up the ghost, and the poisoned chalice of PNP leadership passed to Bunting’s chief acolyte, Mark Golding.

These results should surprise nobody. Six decades of Westminster “first-past-the-post-takes-all” brainwashing has programmed Jamaican voters (an endangered species) to be leader-centric, tribal sheep.

So party leadership is still be-all-and-end-all. In three years as leader, Mark Golding hasn’t implemented a single transformational initiative within the PNP, and according to the polls (39 per cent “poor” or “very poor” rating), is just not seen as the right person for this time. Polls confirm the general growing acceptance/resignation that the PNP under Mark Golding’s leadership cannot defeat JLP in a general election.

So ask not for whom the bell polls. It polls for Mark Golding. He must do something transformational. Wordsmithing PNP philosophy won’t cut it. Golding can build a proud legacy by transforming PNP into a democratic bastion. Three years ago he promised constitutional amendment to allow all PNP members to vote for leader. Three years later, PNP is still in committee and zip-a-dee-doo-da has been done.

He must engineer that transformation then hold new leadership elections. Every registered member must have a vote and non-members, regardless of “affiliation”, not. Then he’ll have moral authority to criticise Government. Otherwise the PNP will continue flailing about fighting phantoms while Jamaica endures a de facto one-arty-state.