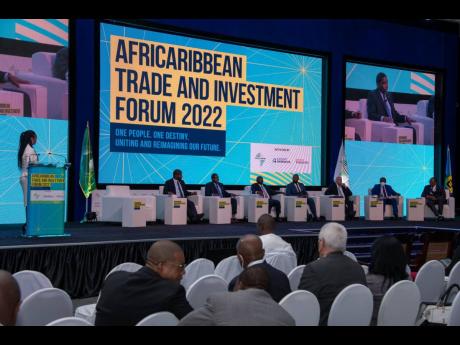 The inaugural Afri-Caribbean Trade and Investment Forum (ACTIF2022) was held in Barbados, September 1-3, with the aim of promoting trade and investment between the CARICOM countries and countries of Africa. This forum was organised by the African Export-Import Bank (Afreximbank), Invest Barbados, the Africa Business Council, the Caribbean Export Development Agency (Caribbean Export) and the CARICOM Secretariat.

The aim is to promote and expand the now meagre level of trade and investment between the Caribbean and Africa and to contribute to strengthening relations between the continent and the region. The forum brought together 1,200 delegates from Africa and the Caribbean. Panels covered a wide range of issues, such as special economic zones, industrialisation and manufacturing, agricultural production, food security, improving infrastructure, logistics for finance and trade, regional integration, and promoting trade and tourism.

The forum provided an opportunity for business networking and saw the signing of several partnership agreements and memoranda of understanding (MOUs). Afreximbank and seven CARICOM countries (Antigua and Barbuda, Barbados, Dominica, Saint Lucia, St Kitts and Nevis, St Vincent and the Grenadines, and Suriname) signed an MOU to promote trade and investments. Afreximbank also signed an MOU with the Caribbean Association of Banks. It seems that the Afreximbank will be able to operate in the CARICOM region. An African-Caribbean Business Council is also to be established.

The CARICOM Private Sector Organization (The CPSO) participated in the forum. I am not seeing that the Network of Caribbean Chambers of Commerce (CARICHAM) was involved. My impression is that the private sector organisations of the individual CARICOM member states were not well represented at this forum. Those who are members may be leaving it to the CPSO to do the foundation work.

It is recognised that, while Africa presents a great potential as a market of 1.3 billion people in 54 countries, there are several challenges to be addressed in order to move trade in goods beyond one per cent of total trade, and to develop trade in services. These include transportation (having direct air and sea links), reducing tariffs and regulatory barriers to trade, mutual recognition of standards and certification, and reducing costs of trading goods and services.

In terms of trade agreements, both CARICOM with CSME and Africa with the African Continental Free Trade Agreement (ACFTA) have much work to do in implementing these agreements.

I note that the Caribbean Broadcasting Corporation out of Barbados is to start packaging some programming that, I assume, will highlight Africa. In the same way, the countries that we would want to target in Africa, would need to have more information about the CARICOM countries. This is where cultural exchanges would be useful if resources are available. We also need to make better use of our connections through the Commonwealth and the Organization of African, Caribbean and Pacific States (OACPS). CARICOM still has very limited diplomatic representational coverage in Africa.

As we look at improving communications with Africa, we also should be reminded that intra-CARICOM communications need to be improved and that intra-regional transportation is a major problem which has to be addressed. The demise of LIAT (the Eastern Caribbean airline) has made traversing the region far more challenging and thus made intra- and extra-regional trade more costly.

As I said in my article of April 20, deepening Caribbean/Africa trade relations will not be an overnight thing and it will need the interest and involvement of the regional private sector, including small and micro- firms. The chief executive officers and stakeholders will have to see the tangible benefits to be gained from trading and investing in African countries.

The International Trade Centre (ITC), in its report ‘Expanding African-Caribbean Trade’, produced for the Barbados Afri-Caribbean Trade and Investment Forum, sees potential to boost African and Caribbean trade, but it also sees the work that has to be done to reap the benefits.

I would think that real progress will depend on CARICOM actually advancing in fully implementing the CSME (setting the foundation) and on the engagement of the regional private sector.

A recurring question for me and which others have posed is: if CARICOM countries are having difficulties trading among themselves, in the wider Caribbean, and generally within this hemisphere, how do they effectively expand trade into Africa?

Let’s think on this.