Peter Espeut | Why a ceremonial president? 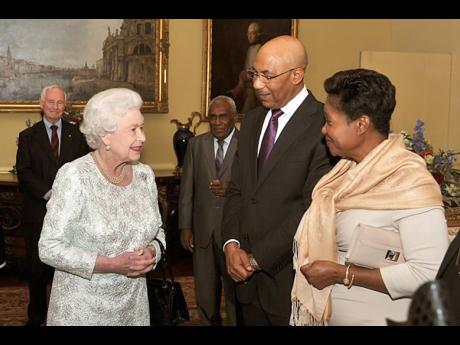 Contributed
Queen Elizabeth II speaks with Sir Patrick Allen, the governor general of Jamaica, and his wife Lady Allen at Buckingham Palace during a visit to London in 2012.

I believe that Jamaicans – politicians and their followers – are monarchists at heart. Why else would we want the annual waste of tens of millions on a ceremonial president?

This kind of president would always “act on the advice of the prime minister” – a rubber stamp. What purpose would he/she serve other than a sinecure for some party faithful?

Despite having no independent power or authority, a ceremonial president needs a suitably appointed presidential palace complete with ballroom and manicured lawns, a stable of official vehicles, and a retinue of staff and servants. In addition, there must be a suitably attired military on call to provide the ceremonial. All that does not come cheap! All towards the pretence of Republicanism.

“We already have all these” you may argue. “My point exactly” I will reply! A ceremonial president is nothing more than a warmed-over governor general; not much of a change, really.

The governor general represents the Queen (sorry: the King); the president will represent … the prime minister – the new monarch!

In truth and in fact, the British monarch has no executive authority in the United Kingdom (much less in Jamaica). She/he simply gives assent to the documents sent for signature, much like what the governor general does, and like what the ceremonial president will do. It is the British prime minister (PM) that wields real power in the UK; the monarch does his/her bidding. The PM visits the monarch at prearranged times to deliver advice (instructions), not to receive any.

Otherwise, the monarchy and palaces and the fancy uniforms are very lucrative tourist attractions! The British public makes back many times over the money they spend keeping a monarch and a royal family.

Are we going to make our proposed ceremonial president a tourist attraction? If not, what purpose would he/she serve, and how will Jamaica make back our investment in their upkeep?

In Britain the monarchy stands above politics, and has the potential to unite a politically diverse nation; the reality of that hit us in the face these last two weeks. Jamaica’s ceremonial president would be creature of politics, adding to and probably deepening our political divisiveness.

If a commission of enquiry is appointed by a ceremonial president acting on the advice (really the instructions) of the prime minister, does that make it an “independent” commission of enquiry? Do we need the expense of a ceremonial president – can a poor country afford such an expensive way to pretend to have objectivity and “independent” appointments?

A monarchy is more than having a monarch: it is a mindset, an approach to life and decision-making. Many politicians are closet kings and queens, revelling in strings of letters after their names, and insisting on titles like “Honourable” and “Most Honourable”, and (can you believe it?!) “Your Worship”!! Real republics eschew that sort of monarchical claptrap! Ask the Most Honourable Barack Obama ON OM OJ.

Real republics operate with the rule of law, not the rule of people like monarchs; our local monarchs write the laws giving themselves the power to decide appeals and overturn decisions of the civil service without having to give any explanation. Very monarchical powers!

In a real republic, politicians are not above the law (in a monarchy, the monarch is immune from prosecution). In a real republic, checks and balances are in place for recall and impeachment. In Jamaica, corruption charges are rarely levelled against politicians, and if they are, the cases are not prosecuted with dispatch, and may never come to trial. Will this change in a Jamaican republic? Anybody wanna bet?

In a monarchy, the crown has first rights on all the land, and holds all mineral rights, even over so-called “private land”. If Jamaica becomes a republic, will the state retain the rights of the monarchy to the mineral rights over private land?

I believe that history will absolve me when I predict that Jamaica may cut ties with the British monarchy, but will install a new local monarchy with a political and legal framework almost indistinguishable from the present post-colonial arrangements: “plus ça change, plus c’est la même chose”.

Look at the way the process to make Jamaica a republic has progressed: the politicians have announced that they have agreed among themselves that Jamaica’s head of state will be a ceremonial president, not an executive president.

Why no public consultation? Must our new wannabe monarchs take this decision for us plebs? Have we no voice, Your Majesties?

The Constitution requires a referendum, and so the decision of our local monarchs will be put before us: yes or no.

If I am asked in a referendum if I wish Jamaica to become a republic, and that means that I am voting for a ceremonial president, then I and like-minded persons may vote “No!”

My recollection is that the new Ministry of Legal and Constitutional Affairs was set up, not to drive the process of us becoming a republic, but to concoct a way to make preventative detention legal. Nevertheless, they speak of a process that would make Jamaica a republic within a year. Nowhere in that timetable is a process of public consultation leading to public consensus on what kind of republic we want. We must vote on the consensus of our new monarchs.

They must not be surprised if they get a “No!”