Garth Rattray | Are they ‘senseless’ murders? 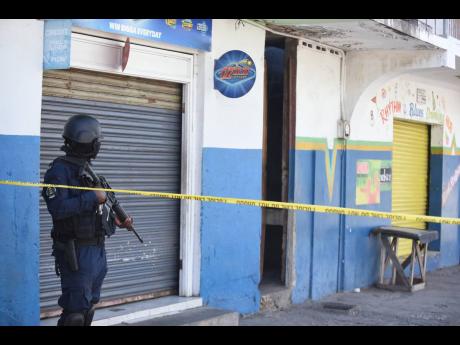 File
In this 2021 photo, a police officer stands guard at the intersection of North and Regent streets, where a shooting incident took place.

When the brazen and cruel shooting murder of hard-working, mother of two, 31-year-old gas station pump operator Chevelle Lewis happened on Passage Fort Drive, Portmore, it pushed this year’s murder tally to over 1,000. Because there was no obvious motive, her murder seemed senseless. However, the police theorised that she was targeted because of an ongoing feud in Central Village.

The shooting murder of a man in St Ann, known only as ‘Bredda’, appeared senseless. But the police believe that the targeted killing “stemmed from a criminal network linked to Steer Town in the parish”. More recently, the Spring Village multiple shooting and three deaths also seemed senseless. But the police believe that one of the people killed was targeted over a missing gun, and the other shootings were meant to terrorise citizens.

Relegating murders/ killings to being senseless is an oversimplification. It can be misleading. It risks treating these killings as harum-scarum, and, therefore, incapable of being solved or prevented. A truly senseless murder is nigh unpredictable, because it may occur if someone goes berserk or flies into a jealous or blind rage. They are usually on the spur of the moment and occur because someone fails to consider the consequences of his/her actions. Only in those instances are murders/ killings truly senseless.

However, no matter how unfathomable, outlandish, unpredictable or brutal our plethora of murders appear, there is almost always something behind them. Although nearby bystanders or witnesses may also be killed, most of the murders have all the hallmarks of being aimed at specific individuals. The killers are not just willy-nilly in their heinous acts. They do not randomly go after people. Most of the killers are sent on a mission to ‘do a job’. And they are stone-cold, heartless and focused when pursuing their quarry. They are death-dealing chelae being directed by someone with a reptilian brain. Whenever someone is fingered for termination, it’s almost always a fait accompli.

The powers that be should have seen this era coming. We must constantly remember that the post-Independence struggle for political supremacy took a nasty turn when guns were introduced into the underprivileged population of dependent citizens. The finger-pointing was furious – each side accused the other of using gunmen to scare opponents and intimidate constituents into voting for them. Both sides complained that gunmen were terrorising their constituents, and that their defenceless followers somehow armed themselves as a means of self-protection.

Naturally, the introduction of guns not only served to increase criminal activities but, concomitantly, it significantly decreased the value of human life. Eventually, nothing was sacred, nobody was safe; people became nothing more than commodities or targets. New urban laws and jungle justice emerged, prevailed, and grew into what we are experiencing today – unbridled indiscipline, corruption, bullyism, criminality, and murder with impunity.

Nowadays, the solution to any problem appears to be getting rid of it by killing someone. Unmanageable bills, unaffordable food, unfit living conditions, an unsympathetic society, and unattainable life’s goals – all contribute to the pursuit of ill-gotten income through criminal activities and, in recent times, scamming. Gangs are surrogate families; and they often ‘communicate’ through violence The monetary gains from gang activities can be humongous. Therefore, the need to maintain control over turfs usually involves bloodbaths.

It’s bad enough that some people consider murder as the answer to being disrespected, infidelity, theft, dishonesty, and to any dispute or disagreement. But they will also kill relatives, spouses, siblings, progeny, friends, human beings of all ages, and even associates of the cause of their ire. A recent example was the murder of 67-year-old Donald Shaw, aka ‘Tabby Diamond’ – the lead singer of the legendary Mighty Diamonds. He was targeted in a drive-by shooting. Two other people were shot just because they were nearby. One succumbed to his injuries. Investigations suggest that Shaw was murdered because his (jailed) son was linked to criminal activities.

Because life has become so cheap, we are living in perilous times. It probably costs less to hire killers than it does to hire a lawyer to seek a legal solution to a problem. And, sometimes when someone is killed, it is a reprisal killing. It becomes a macabre game of ping-pong, where the killings go back and forth with no end in sight. Killers are psychopathic sociopaths and will bide their time before exacting revenge. And there is no care for any collateral damage – man, woman or child.

So-called senseless murders may not make sense to us; but, they make perfect sense to the perpetrators. Hopefully, one day when the citizens who know the killers become tired of the incessant bloodletting, they will share their inside knowledge and put an end to this dark red stain on our history.