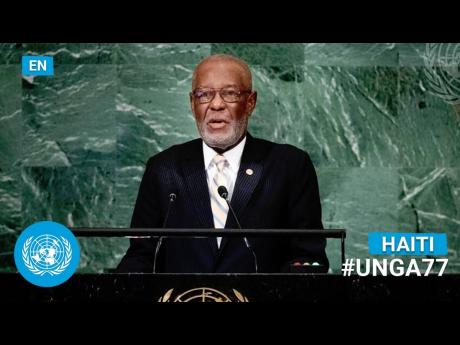 In July 2021, I wrote about Haiti at the time of the assassination of President Jovenel Moise. I then gave an overview of the Haitian economy. Since then the situation has worsened. I have been reading a book on Jamaica in 1903, and the negative comments made about Haiti by the author, as the ship passed, highlighted further for me the tragedy of that country; and this was nearly 100 years after the Haitian Revolution.

The struggles of Haiti continue a further 118 years later. It seems that there has not been a time when there have not been crises in Haiti, and thus its potential for development could not be realised. Why should Haiti continue to be the only least developed country in the Western Hemisphere?

Although Haiti has been a member of CARICOM since 2002, I do not think many of us in this region are fully aware of the dire situation which is existing in that country. We hear mainly through the international media of the catastrophic damage from earthquakes and hurricanes, of health crises, and of social unrest, but it seems some distance away.

The Bahamas and Jamaica are the nearest CARICOM neighbours, but our more recent concerns are mainly about those who may be seeking refuge on our shores, and about criminal liaisons between our nationals and Haitians (the guns-for-drugs trade). We basically are not engaged with Haiti, regardless of how many times people reference the importance of the Haitian Revolution (1804).

In the case of Jamaica, we recall those who fought in the revolution, forgetting many of the elite who sought refuge here from it. The engagement is further limited as we do not speak the same language; we have limited diplomatic representation there; and travel is a challenge, as we must go through Miami and visas are required, not just to traverse the US space. There is also, for some, a fear of Haitians due to perceived pagan cultural and religious practices.

CARICOM countries have been conducting limited business with Haiti, based on the sparse figures available. Jamaica Broilers has recently downsized their operations there due to the instability.

The situation in Haiti is now compounded by the impact of the COVID-19 pandemic and the effects of the war in Ukraine, which have given rise to inflation, impacting necessary products such as fuel and food.

We should all endeavour to be aware of the situation in Haiti. Their insecurity can impact all of us in this hemisphere, and some of us may not be too distant from it, given our own challenges with gangs.

At the 77th UN General Assembly, the General Debate, in New York last week, Haiti was one of the global humanitarian crises addressed by the leaders. The UN Secretary General spoke of gangs destroying the very building blocks of the Haitian society.

Among CARICOM member states, Jamaica’s prime minister expressed deep concern about the political, economic, environmental and social situation, which is long-standing and presents serious obstacles to the peace and dignity of the Haitian people and to the region. The prime minister supported a Haitian-led process to arrive at sustainable solutions to the challenges, and said that Jamaica was committed, with other CARICOM partners and the international community, to working more closely with Haiti to provide consistent and meaningful support.

The speech of Haiti’s Prime Minister, Ariel Henry, was delivered by Foreign Minister Jean Victor Généus. The Assembly was told that Haiti is at a crossroads, a turning point in history. Haiti is facing a multidimensional crisis whose consequences threaten democracy and the very foundations of the rule of law. The activities of armed gangs have created a poisonous climate, which poisons the daily life of the population, and is an intolerable situation that has taken on worrying proportions.

Haiti wants to come to a point where the rule of law can be restored, democratic elections held in the country, and assistance provided to rebuild democratic institutions. The Government wants to encourage reconciliation within the country which will be critical to peace-building.

I am hoping that CARICOM, working with the international community at this time, will be allowed to provide assistance to Haiti, which, with the support of its government and people, will contribute to pulling the country back from the brink of the abyss. From my reading, the situation in Haiti is now really grim.