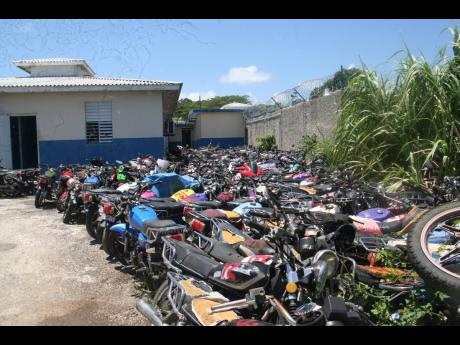 File
In this file photo, impounded motorcycles are strewn along the ground at the Hanover Police Headquarters in Lucea.

I received a desperate telephone call from someone who is very close to me. She was in a state of psychological distress. One of her bikers was caught up in the new police campaign. She had been through a hell of a lot in trying to earn a living. She eventually decided to invest in a bike delivery service. A policewoman stopped one of her delivery bikes and he telephoned her to help sort things out because she owns it.

When she arrived at the location, she observed a policewoman writing up a ticket for an offence. She inquired about the procedure for getting the bike released, but the policewoman unleashed an unnecessary and disrespectful tirade. This caused the owner to recoil, but she needed to know what was going on, because she saw the bike being loaded onto a wrecker (a tow truck). The ticket was for “no carrier’s licence” and, even though the service never transports food items of any kind, an addendum of transporting food was tacked on.

It is true that ignorance of the law is no excuse; however, the owner believed that everything was in order, because she went through all the proper channels in setting up the business. The bikes were examined, licensed, and insured in a company name, and nobody told her that the bikes must have carrier’s (commercial, green plate) motor vehicle license. The policewoman was on the warpath; the owner was subjected to insult after insult as she tried to ascertain what happens next.

The owner heard that the bike was going to a pound, but she had never heard of it, and amid the melee generated by the policewoman, no one told her where to find it. So, she was forced to follow the wrecker to learn where her bike (the source of her income) was going. The wrecker driver took the scenic route. He stopped at several places, including for lunch and to pick up his child on the way to the pound.

The police at the pound appeared very helpful, friendly, and courteous. The owner learnt that the policewoman is notorious for her aggressive, heavy-handed, and disrespectful behaviour towards the public and, for some strange reason, especially towards women. The wrecker driver confessed that he noticed the owner following him and he decided to serve her a sauce by going all over the place. He revealed that he thought that she was going to ‘say something to him’, for him to release the bike to her. Obviously disappointed at the lost [economic] opportunity, he drove around out of spite.

The situation of going back and forth and paying multiple fees to secure the release of the impounded bike, was only made worse by the fact that it was only going to be released after the green plates were installed; but it takes several weeks to acquire green plates. Astonishingly, the system is currently down, and no one can say when it will resume issuing green plates. In the meantime, revenue is lost, loans must be paid, insurance and licensing fees are squandered, and expensive overheads will not wait.

Subsequently, another of her bikes was stopped, but a reasonable policeman issued a ticket, and the bike was sent on its way, with the clear instructions that the green plates are needed. This way, she can continue earning a living for herself and for the several riders that she employs, while she conforms with the rules and regulations. To do otherwise is to make life very difficult for the bikers and their employers who are trying very hard to make an honest living in these very tough times.

Since this very unpleasant experience of someone close to me, I have been looking at the multitude of extremely popular delivery bikes on our roads, and all I see are white plates. I am at a loss to understand why the decision was made to target bikes for the lack of green plates when there are blatant and potentially deadly things about bikes that cry out for enforcement in order to save lives.

Since the police say that green plates are necessary, they should make a public announcement to all commercially active bikers, whether the bikes are owned by the riders, or owned by a company that buys them for the bikers to use. Give an amnesty period of, say, three months, to straighten out any problems. Then, prosecute the offenders.

Although I understand that it happens, I have never seen riders without helmets being stopped. This is where the focus of the police campaign should be, because this will save many lives. Bike fatalities account for the majority of road fatalities, yet helmet use remains in the minority. Most bikers totally ignore stop signs and red lights; a sustained campaign is needed to prevent this.

I am seeing many males as pillion riders, although we know that only fully licensed riders (not those with learner’s licences) are permitted to carry passengers. And we also know that many murders are committed by pillion riders. The police should stop and check out bikes with pillion riders; that way it will deter killers from using motorbikes to slaughter other people. Little wonder that citizens perceive traffic tickets as revenue earners for the Government and rogue cops, and not instruments to reduce crashes.