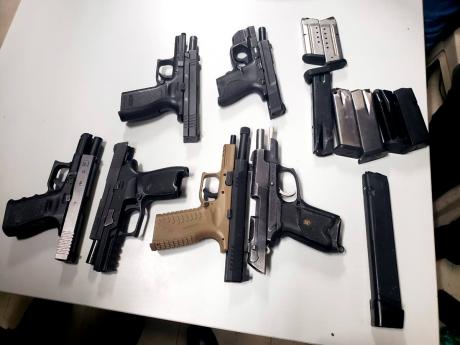 We take at face value America’s acknowledgement that the flow of illegal firearms into the island is an “enormous problem” for Jamaica, and Washington’s willingness to do something about it. But while recent gun-control legislation in the US is a step into the right direction, that of itself will not sufficiently address the issues faced by Jamaica and other Caribbean countries where American-made firearms fuel crime.

Washington must now support the law with robust, front-facing initiatives to prevent, or seriously dent, the illicit ‘export’ of small arms from the US.

As Barbara Feinstein, deputy assistant secretary of state for Caribbean affairs, noted on her visit to Kingston last week, Jamaica faces a serious crisis of crime. Each year, more than 1,000 people are murdered here, at a rate of nearly 50 out of 100,000 people. There are also over 1,000 shooting incidents in which people might have been injured, but did not die, and communities are intimidated.

Over 70 per cent of Jamaica’s murders are committed with guns, which are not made in the island. Overwhelmingly, they are manufactured in the United States and smuggled here, and elsewhere in the region, where they cause mayhem. The illegal firearms trade is facilitated by their easy availability in the US, on the grounds that Americans supposedly have a constitutional right to bear arms.

In the past, America’s focus in helping countries like Jamaica has been primarily on training domestic law-enforcement officials; the after-the-fact tracing of guns used in crimes in these jurisdictions; and partnering with local law enforcement in the investigation of transnational crimes, especially those that affect the United States. The flow of narcotics to the US or the fleecing of American citizens of money through lottery scams are the priorities.

The mid-year passage of the so-called Bipartisan Safer Communities Act, in response to the country’s rash of mass killings with high-powered guns, is a window of opportunity for Jamaica and its partners in the Caribbean to press the Americans to do more. Those partners will, hopefully, include Great Britain, whose overseas territories in the Caribbean, too, are increasingly victims of crime committed with US-made guns. In this regard, Britain should leverage its ‘special relationship’ with the United States to muster urgency on the matter that it has not managed in the past.

To be clear, America’s new law – its first gun-control legislation in three decades – is primarily inward-looking. It will, among other things, cause background checks of prospective gun-purchasers under the age of 21, and block the sale of firearms to people convicted of abusing intimate partners. It also makes it illegal to produce guns without serial numbers, as well as tightens the rules for interstate and international trade and trafficking in guns.

Specifically, from this country’s standpoint, it makes it unlawful to “ship, transport, transfer, cause to be transported, or otherwise dispose of any firearm to another person in or otherwise affecting interstate or foreign commerce, if such person knows or has “reasonable cause to believe that the use, carrying, or possession of a firearm by the recipient would constitute a felony”. Similarly, “It shall be unlawful for any person to sell or otherwise dispose of any firearm or ammunition to any person knowing or having reasonable cause to believe that such person, including as a juvenile ... intends to sell or otherwise dispose of the firearm or ammunition in furtherance of a felony, a Federal crime of terrorism, or a drug trafficking offense.”

These are important legislative restrictions. Gun-sellers will be obligated to consider the peril of being convicted of a crime, and jailed for up to 15 years if someone, randomly and without context, purchases guns and then these weapons fall into the hands of criminals. There is a greater obligation for gun-sellers to know their customers.

But, little will happen if the rules, especially those with the potential to benefit countries like Jamaica, are not aggressively policed.

Moreover, with millions of guns floating around the United States, traffickers can find loopholes around these regulatory requirements. That is why multiple filters are required, including more inspections at ports, to detect attempts to illicitly ship guns abroad. This is one area where the Americans have for a long time been too lax in their gun-control efforts. It is something to be seriously addressed.