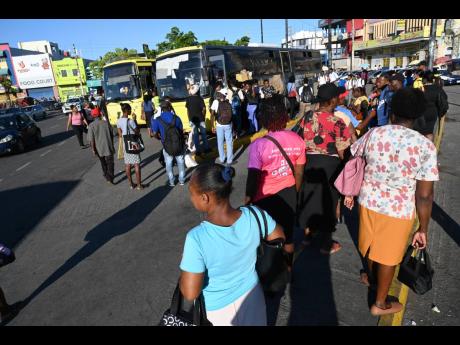 I am sympathetic to the need for public passenger vehicle (PPV) operators to make a living. However, I often criticise those that behave terribly on our roads because I am totally against them flouting the law, disrespecting and endangering other road users.

I have seen PPV operators do just about anything that they please on the roads. I have seen route taxis stop to drop off or pick up passengers while they are in the middle of an intersection. They do this even when it is an intersection with a traffic light. Everyone else must simply wait on them and their passenger(s). Just when I thought that I had seen it all, I saw a new one recently. This time, I saw a taxi stop in the right-hand lane (beside the concrete road divider) and then, with traffic trying to avoid colliding into him, reverse into the [traffic light] intersection to pick up a male passenger.

It is commonplace to see PPV operators ‘undertaking’ lines of traffic by using the soft or hard shoulder. Some of them even drive across the road and use the hard or soft shoulder on the right side of the roadway and face oncoming traffic, so that they can overtake everyone…including their competitors. Some PPV operators use turning lanes to beat the traffic and drive to the front of the line. They drive through red lights and stop signs at will. They totally ignore the traffic islands, and even U-turn by squeezing through the openings in dividing walls used for pedestrian crossings. On some routes, they form a third lane and bully all other road users into pulling to the side to prevent a crash. They race one another and cut off other drivers to stop suddenly and pick up or drop off passengers. As far as most route PPV drivers are concerned, the rules of the roads are determined by the ‘eat a food’ mentality and the ‘one stop driva’ philosophy.

Minibuses behave like big route taxis; but their size makes them far more formidable, dangerous, destructive, and lethal. They employ the ‘might of way’ principle. Since might makes right, get out the way! Not only do those vehicles pose greater danger, because there is a driver (colloquially known as a ‘driva’), and a conductor (colloquially known as a ‘ducta’), they are also twice as likely to use physical violence on their crash victims.

It’s little wonder that route taxi and minibus drivers receive and accumulate so many traffic citations. The problems here are that rogue cops are making a fortune off the PPV drivers, and the country also stands to gain significantly when they get ticketed. In other words, ticketing is perceived as being all about money, and the message of safe and proper use of the road becomes diminished, and often totally lost.

After accumulating large numbers of traffic tickets and refusing to pay them, these lawbreaking taxi and minibus drivers have the audacity to demand a third ticket amnesty. Some appear to be accumulating tickets from one amnesty to the next. Instead of paying the outstanding tickets and retaining their receipts as proof of payment or challenging them in court, the vast majority of PPV operators held the entire country ransom to push their demands. Many reports surfaced of ‘strikers’ intimidating and assaulting passengers and the drivers that want to keep working.

But the Government should have seen this coming. I recall when there was an explosion of ‘robot’ (illegal) taxis and minibuses because the Government could not keep up with the demand for public transport. Instead of doing everything possible to give us an efficient and safe public transport system, the ‘robots’ were regularised, and it instantly became a booming business. Feeling indispensable, they rule the roadways and, in doing so, influence some private drivers to follow suit. And now we have an engrained culture of lawlessness and disorder everywhere.

We should never bow to the illegitimate demands of the lawbreakers. I retain the opinion that an environment (such as ours) that facilitates and tolerates indiscipline and lawlessness, flings wide open the doorway to criminality and brazen murders with impunity. When criminal elements realise that people are doing as they please and getting away with it for the most part, it emboldens them to commit whatever crimes they want.

The impasse between the PPV drivers and the Government should be used as a seminal event to effect positive change. It’s time to press home the advantage and bring order and discipline to our streets once again. It’s time that the tail stops wagging the dog. We need to use this opportunity to show lawbreakers who is running things. Since the Taxpayer Registration Number is needed for several important business transactions, we have the technical capability to flag persons with unpaid tickets, why aren’t we using it?

In properly run jurisdictions, drivers with multiple unpaid tickets are jailed and have their driver’s licences suspended for varying periods of time or revoked entirely, if the egregiousness of the offences warrants doing so. We need to take the spotlight off the fines and focus instead on educating serious and/or repeat offenders. Until and unless those horrible drivers are forced to pay for and attend an entire course of government-run driving school every time that they mess up badly, the madness on the roads will never cease.

Garth A. Rattray is a medical doctor with a family practice. Send feedback to columns@gleanerjm.com and garthrattray@gmail.com