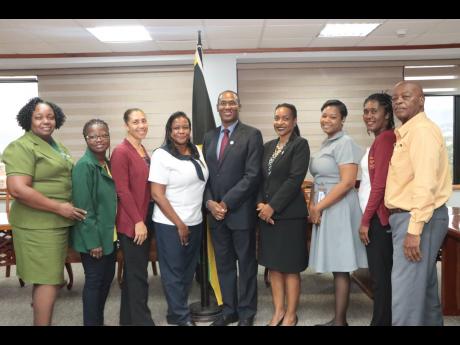 The announcement of a wage settlement with a majority of government-paid workers is good news. The blending of multiple tax-free allowances into basic salaries will magnify base pay and, therefore, pension entitlement. The higher gross ought to...

The announcement of a wage settlement with a majority of government-paid workers is good news. The blending of multiple tax-free allowances into basic salaries will magnify base pay and, therefore, pension entitlement. The higher gross ought to make it easier when the public servant applies for financing. It will also bring many more into the tax net and reduce the padding which has become endemic in the calculation of allowances. Let us see the details before the clapping starts, and let’s also figure out how the increased pensions are going to be financed when they become due.

The question which is completely avoided every time the issue of public-sector compensation arises is, what return will the taxpayer get in return for shelling out the extra billions every year? What is the increased productivity which will justify the bigger money? The arc of national total factor productivity has been in a state of chronic decline since Independence. And that’s not just in the state sector, but government, directly and indirectly, is the largest employer and supplier of services.

The value of labour’s output ought to be commensurate to compensation if unfairness and waste are to be avoided. The Jamaican economy is largely premised on the exploitation of cheap labour. But cycle after cycle, the taxpayer pays out more to persons who offer little improvement – no increased value in public services.

So the question for Dr Clarke is, what are the enhanced outcomes, the better value which, on our behalf, he is expecting in exchange for the bigger raid on our pockets? Tell us that convincingly and measurably, and then I will applaud.

Of course, that question of value for money does not even arise if teachers, policemen and civil servants convince themselves, and us, that they are underpaid servants entitled to more for just what they are doing now.

Half-truths are sometimes more dangerous than outright lies. When are we going to have a discussion and consequential policy and action regarding labour productivity? Or as the scammer guy reasoned with me recently, that his gain, absent honest labour, was nothing more than small-scale reparations due to every black man. Or like those in or around the JUTC who feel entitled to billions of dollars of fuel annually, because they know we will just kiss our teeth and provide more.

How about teaching the principles of fair reward related to fair, effective effort in our schools? From how the present negotiations have been reported, that change in popular consciousness has not started yet.

Barry Chevannes used to chant that “revolution tek a year or two”. Until the revolution of improved productivity is achieved, cut the talk about progress or prosperity, except for the very few who have the know-how and means to exploit the poverty of mind or pocket of the rest of us.

It really doesn’t have to be that way though. Last week, I had the opportunity of touring a factory in the US which is producing Jamaican patties for the highest tier of the American food chain. Started by industrious Jamaicans, who migrated because of what they perceived was political uncertainty and who had suffered unnecessary economic loss, they, not us, are lifting up the country’s fame, and the fortunes of their workers and investors by creating cross-over market products with the finest Jamaican style and flavour. Increasing efficiency and productivity as worthy objectives in themselves and, of course, in expectation of greater rewards, are their goals. A so it fi do!

The consequences of overdue social changes of the 1970s, mixed with the not-even-yet-overcome ‘bitch lick’ of the oil price spiral in a colonial-minded, petroleum-addicted infant nation, still beg for dispassionate analysis. Some of our best economic drivers reside abroad. That need not have been so.

And it is still so despite all the Government’s prating of victory and success. Check how well the recruiters are doing, and look at the ever-lengthening lines in front of the US Embassy.

As we notice the successes of the Jamaican diaspora and benefit from their philanthropy and reinvestment, our local attitudes to training, work and reward remain in need of serious alteration.

The Jamaica Council of Churches sponsored a forum on the Church and peacemaking recently, where Ministers Williams, Chuck and Senator Scott-Mottley acknowledged the limitations of the State to inspire the behavioural change necessary for a harmonious society. They plead for the intervention of the Church to become violence interrupters, mediators and mentors. But all the speakers, with the exception of the fearless Rev Jonathan Hemming, declined to address the fundamental, systemic obstacles to peace and comity.

Sure, church members ought to be empowered to engage in all the roles mentioned, but particularly in the orbit of schools. Christian denominations operate or influence more than half of the almost 3,000 early-childhood institutions. It is in these places and in the early primary grades that principles of human worth and dignity, attitudes towards work and positive connection with parents can be best inculcated. Since we refuse to recognise what must be done to normalise serviceable family structure, the early- childhood period is the best available point of infusion.

Scrap the rest of the curriculum and just ensure literacy, numeracy and proper socialisation for all by age nine Then watch productive citizens emerge; labour take on more worthy purpose; and local enterprise strive, equal to foreign effort.

For the first time at last, some political actors seemed open to collaboration with wider groupings in the national interest. Let us pray that they are sincere and that a new leadership spirit and style will emerge.