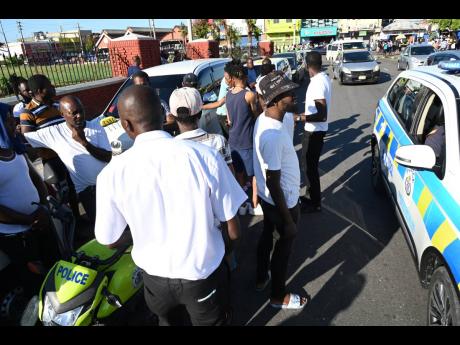 Rudolph Brown
A policeman (inside the patrol car) talks to taxi operators during the taxi strike on Monday, November 14 at North Parade, downtown Kingston. The taxi operators are demanding a traffic ticket amnesty.

Last week, I felt like I was in the Twilight Zone. On Sunday, transport operators voted to withdraw their services islandwide for three days, starting Monday. The reason? The Government turned down their request for a traffic ticket amnesty. It...

Last week, I felt like I was in the Twilight Zone. On Sunday, transport operators voted to withdraw their services islandwide for three days, starting Monday. The reason? The Government turned down their request for a traffic ticket amnesty.

It was reported that, when the Transport Operators Development Sustainable Services (TODSS) held a meeting to discuss the issue, 99 per cent of the attendees voted to go ahead with the decision. The members are requesting a payment plan, demanding at least four months to pay off their tickets. According to TODSS President Egerton Newman, “We cannot take it any longer, and we are calling for, and we are in need of, a payment plan.”

The sheer audacity of the transport operators floored me. To the best of my knowledge, if you get a traffic ticket, you are supposed to either pay the fine or, if you feel the ticket was unfairly issued, go to court and contest it. It is as simple as that. These people, however, break the law repeatedly, do not appropriately deal with the tickets they have collected, and then demand more time to pay the fines. It is preposterous.

It would be unfair to generalise and say that all public transport drivers are a menace on the street. There are decent ones. But many are indeed a nuisance and present a threat to public safety. Many of these drivers break traffic laws with impunity. It is not uncommon to see them break red lights, create new lanes, drive on sidewalks and over medians, overtake long lines of vehicles, and perform other dangerous stunts.

Road traffic laws are meant to keep the populace safe on our thoroughfares. And we are very vulnerable. The carnage on our roadways is off the chain. Last year, 483 persons were killed in road traffic accidents in our country, an all-time high, and the projection for this year is close to that. In addition to the fatalities, many persons are injured and maimed because of accidents on our streets. Road traffic accident victims account for a significant number of emergency room visits. They take up operating theatre time and beds in hospital wards. They divert attention from patients with other emergencies, such as heart and asthma attacks and strokes. And the majority of these are preventable. The cost to manage these patients is significant and takes a substantial toll on the country’s finances.

So, if we examine the context in which the transport operators’ demands and actions occur, they are clearly being undisciplined, selfish and, quite frankly, stupid. Their sense of entitlement is offensive.

But, as I grappled with the reality of the above scenario, another bombshell rocked my sensibilities. A man was seen in a viral video terrorising some female passengers and forcing them to depart from a taxi whose driver had chosen not to partake in the withdrawal of transport services. “Hey, yow. Come outta dis”, he shouted at the passengers while wielding a stick in his left hand, continuing, “Mi nah ramp wid dem, tink a play play ting bou ya? Nuh badda romp wid b*mbocl**t.” The man, who gave his occupation as a professional clown, was subsequently arrested and charged.

But that was not the end. Following his arrest, I saw a video of the miscreant on ZIP 103 FM, being interviewed by MoniQ. To my astonishment, after the interview, she was seen laughing with him and presenting him with a large baton, neatly gift-wrapped with a bow. So, a man violently terrorises people in a vehicle and is rewarded with an even sturdier potential weapon.

Thankfully, I was not the only person outraged by this. There was a widespread public backlash against the station and the woman, including the announcement by several corporate entities that they would be pulling their ads from the station. But ZIP was not the only media house giving this man publicity. THE STAR featured him on their front page, and TVJ shared a video of an interview with him. Why are these institutions giving this thug a platform? What about the browbeaten passengers in the taxi? Did they reach their destinations that morning? How about gifts for them?

The above incidents showcase how dysfunctional, careless and unempathetic our society has become. And it is rotten from the top down. Why are people allowed to accumulate traffic tickets and still drive around freely? It is easy to point fingers at the taxi and bus drivers, many of whom should be banned from our streets, but the slackness begins with our authorities.

For example, a bus driver who recently triggered an eight-vehicle collision on Constant Spring Road in St Andrew allegedly had 120 outstanding tickets. Why on earth was he still driving? Or, better yet, why was he not behind bars? Why are people with outstanding tickets allowed to renew their driver’s licences? Why is the system so porous? Why are the people responsible for enforcing these laws not being held accountable?

This lack of accountability empowered the transport operators to make their outlandish demands. They would not even think of making such a request in a more decent and civilised country. In fact, they would have been taken off the streets in such societies.

If we call out the drivers and the clown, we must call out the biggest clowns of all: the authorities in charge of enforcing our road traffic laws who have abdicated their responsibilities. They are the ringleaders of this circus.

In my last week’s column, I had highlighted the contribution of Prof Golding, there were two factual errors which were brought to my notice. Thank you for pointing them out:

– The Order of Jamaica is the fourth highest decoration the country can give, not the highest.

– Professor Golding did not start the Hope Institute, but set up a conference room and an office for a pain specialist nurse there.