Peter Espeut | Of legacies and reality 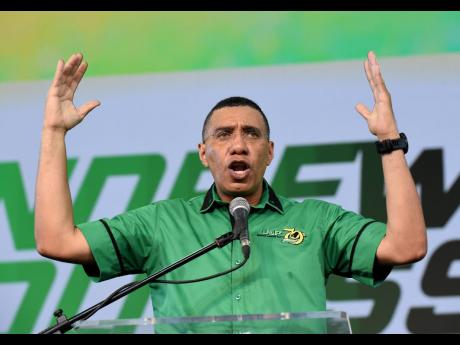 “By their fruits you shall know them”.

Everyone leaves a legacy, whether they want to or not. People will remember you for what you actually did, not for your good but unfulfilled intentions, however high-sounding.

A few weeks ago (on October 12), Prime Minister Andrew Holness declared openly: “I have passed the stage of trying to or needing to win political popularity and favour; [that] doesn’t matter to me anymore. I have to start thinking about legacy.”

I was a little surprised to hear this kind of talk, as PM Holness is still a relatively young man – only 50 years old. Maybe he knows something we don’t. But he is gaining wisdom with years: a prime minister taking public policy decisions in search of political popularity is not going to leave a meaningful legacy. Indeed, sometimes it is the politically unpopular (at the time) policies that produce enduring legacies.

I think we all agree! For some time, well-thinking Jamaicans do not like the Jamaica we see, and we want change for the better. Andrew Holness said as much at his first inauguration as prime minister on October 28, 2011; I encourage you to go to YouTube and watch the hour-long speech. Among other things, he said: “Jamaica is yearning – crying out – for a new politics to emerge. … Zones of political exclusion are incompatible with freedom, and aspects of our politics are an affront to liberty. It is time to end garrison politics. … We cannot afford wastage and corruption; ultimately, this ends up being a burden on the poor”. He said other things, lamenting the poor state of public education, the high crime rate, and the large number of gangs.

Good words spoken more than a decade ago. What a legacy it would be if those worthy aspirations even approached realisation. But we know that the old politics is still with us, and well as gangs and garrisons, crime and corruption, wastage of public resources, and low outcomes in education.

“While this election was conducted in a pandemic which would have impacted on voter turnout, we are still very concerned about the low voter turnout that has become now a trend over the last three elections. We know that a large number of Jamaicans are not satisfied with the integrity, dignity and efficiency of their State and government. We commit to make this Government the highest in integrity, dignity and efficiency.”

He expected applause, and when it did not come, he clapped himself. Andrew Holness has a credibility problem.

I believe that his intentions are good, but we all know that good intentions are not enough; you have to have resolve. He wants history to remember him as the green prime minister, and he began well to construct that legacy: he shut down the Chinese project that would have destroyed the Goat Islands as a viable natural ecosystem; he shut down the Chinese project to build a coal-fired power plant at Nain; and he banned single-use plastic bags; all good! But then reality struck: the Chinese shut down bauxite-alumina operations at Nain, and threatened to withdraw.

In a moment of decency, the government environmental agency refused a permit to extract limestone from a biodiversity-rich natural forest at Puerto Bueno Mountain in St. Ann, but Holness overruled them. After the uproar, conditions were imposed, and Holness declared that he would cancel the permit if any of the conditions were not met; some were not met, and he declined to cancel the permit. That will be his legacy!

Financial impropriety is discovered, and the responsible minister resigns from the Cabinet, but not from Parliament or the party. What signal does this send? No tainted people in my Cabinet. Good! But when the tainted person is allowed to represent the party in the next election, it signals a high tolerance for corruption. That will be his legacy!

No doubt, Holness wants history to remember him as standing up for women’s rights, but when video footage appears of a man beating a woman with his fists and a chair – a man resembling a member of parliament on his side – there are contortions and accommodations. If nothing happened, why make a report to the police? If he did nothing wrong, why did he resign from the party but not from the Parliament? If he did nothing wrong, why are his party members calling for forgiveness? What is there to forgive? This saga which happened on Andrew Holness’ watch will be part of his earned legacy.

If Andrew Holness really wants to leave Jamaica better then how he found it, he needs to take hard decisions, and hold his members accountable. Otherwise, it will be the same old, same old with new, younger faces.