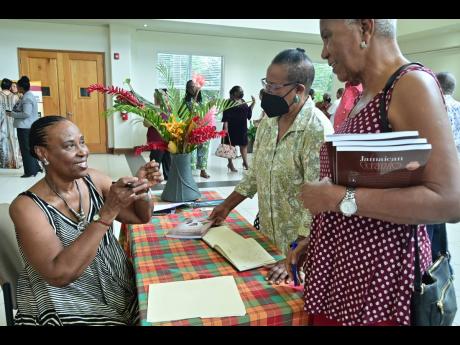 In September 2017, Norma Rodney Harrack made a routine visit to the Edna Manley College of the Visual and Performing Arts. She was there to confirm her teaching schedule. The outcome of her meeting with management was completely unexpected. She was casually informed that her services were no longer needed. Just like that! Norma had been teaching part-time at the School of Art for 40 years. She certainly hadn’t presumed that she was entitled to be employed indefinitely. But she was surprised by the insensitive way in which her dismissal was handled.

One of Norma’s favourite poets, Lorna Goodison, had the perfect remedy for the hurt. It was a reminder of the therapeutic power of creativity:

“Some of my worst wounds

have healed into poems.

stabs in the back

have released a singing

trapped between my shoulders.

to the tongue’s rise

to toe the line again.”

Last Sunday, Norma’s first solo exhibition in almost a decade opened at the Regional Headquarters of The University of the West Indies. The wound of disrespect had most definitely healed into magnificent ceramic art. The range of shapes and textures is truly remarkable. And the colours! Brilliant aquamarines, vibrant sunset hues and subtle earth tones are inspired by Jamaica’s natural environment. There were 57 exquisite pieces in the collection. Most of them were acquired immediately.

‘TRADITIONS IN THE SUN’

Norma’s very first exhibition was in 1976 while she was a part-time student at the original Jamaica School of Art. She showed her work to the influential fine art painter Eugene Hyde who owned the John Peartree Gallery in New Kingston. He agreed to host her solo exhibition. Over the last four and half decades, Norma has participated in numerous exhibitions and won several awards and honours for her superb ceramic art. These include the National Honour, Order of Distinction; and the Institute of Jamaica’s Silver Musgrave Medal. In 1993, Norma’s “Lidded Form” was featured on a commemorative Jamaican postage stamp.

In 2000, Norma had a solo exhibition at the Burlington Gallery in Ottawa, which she dubbed “Traditions in the Sun”. Australian and American members of the International Academy of Ceramics who were attending their annual conference saw Norma’s exceptional work and proposed that she be invited to join the association. Since then, her work has been accepted at several of the curated exhibitions of the Academy worldwide, most recently this year in Geneva.

Norma is not only a practising artist. She’s an academic who has written extensively about ceramic art. Her essay on her mentor, the master potter Cecil Baugh, was commissioned for the Dictionary of Caribbean and Afro-Latin American Biography, edited by Franklin W. Knight and Henry Louis Gates, Jr and published by Oxford University Press in 2016. Norma affirmed that the pioneering Baugh produced “a historic body of pottery”. She noted that, “In 1991 the National Gallery of Jamaica opened its Cecil Baugh Gallery of Ceramics as part of its national development of the visual arts.” She also highlighted “the spirituality that infused the man and his work”.

In 2003, Norma completed an MA in Heritage Studies at The University of the West Indies (UWI), Mona. She developed her thesis into a book, Jamaican Ceramics: A Historical and Contemporary Survey, which was published this year by The UWI Press. Expertly designed by Robert Harris and beautifully illustrated, the book tells the engaging story of the evolution of pottery here from pre-historic times to the present.

Norma’s scholarship is impeccable and her accessible language appeals to a wide audience. Both specialists in the field as well as lovers of ceramics will enjoy the book. Norma gave a copy to the Edna Manley College. Hopefully, generations of ceramics students will continue to benefit from her expertise, even though she no longer teaches there in person. Norma did a book signing at the exhibition. All 50 copies of the book were scooped up. They will make excellent Christmas gifts. The UWI Press is expecting more very soon.

A few weeks before Norma’s exhibition, my long-time friend Dr Avis Glaze, a distinguished Jamaican educator and international consultant now resident in Canada, came home to give a keynote address at the annual conference of the Association of Principals and Vice Principals. I invited her to dinner and we ate off plates made by Norma. When Avis saw the rest of my collection of Norma’s work, she wanted to meet the artist and commission a bowl. Norma readily agreed for us to visit her at home. Her dining room was full to overflowing with work for the show.

Well aware of Norma’s bigheartedness, I took the liberty of advising her that she needed to put a premium price on the extraordinary body of work. She had outdone herself. And I reminded her that her students charge more for their work than she does for her own. She laughed and reassured me that she had asked an expert to appraise the work and give an appropriate valuation. I was relieved.

Norma’s generosity is legendary. I have been a beneficiary on so many occasions. Once, I went to Papine Market and saw an item that Norma had told me she wanted. When I took it for her, she offered me a beautiful pot. I said, “Norma, is just a lickle ting mi get fa you. Mi can’t tek dat. Is too much.” And she insisted, “Tek it! I want you to have it.” The pot is one of my prized possessions. Not just for its beauty, but even more because it manifests the essence of Norma.

Norma’s show ended on Saturday. If you missed it, you can catch an excellent interview with her as well as comprehensive coverage of all the artwork on Anthony Miller’s “Entertainment Report”. It will be broadcast on TVJ on December 9 at 8:35 p.m. Last Sunday was my birthday. I always have a bashment dinner party catered by my friend Dawn Woodstock of Evence fame. Lingering COVID mash up dat. When I was asked by several of my usual guests how I was going to celebrate, I said at Norma Rodney Harrack’s exhibition. I couldn’t imagine a more desirable gift.

- Carolyn Cooper, PhD, is a teacher of English language and literature and a specialist on culture and development. Email feedback to columns@gleanerjm.com and karokupa@gmail.com.