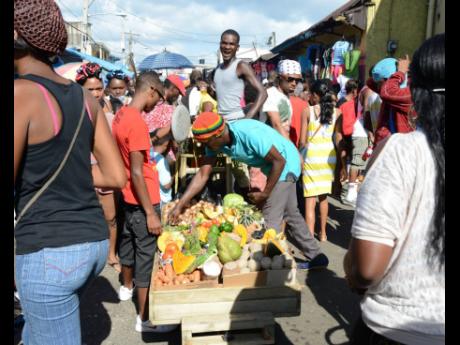 File
In this 2014 Christmas Eve photo, people shop at the Grand Market in Linstead, St Catherine. Currently, reasonably priced, nutritious food is beyond the reach of the minimum-wage, working-poor majority of Jamaicans.

Last Tuesday, this newspaper challenged the ever-optimistic Planning Institute of Jamaica to explain how the more than three-quarters of a million Jamaicans of working age who are outside of the labour market, could be brought within it to reduce crushing and escalating poverty and fill the worker deficit in tourism, business processing and construction – not to mention agriculture and other sectors. Who is asking why these people are not working?

Then later in the week, there was the embarrassing admission that little or nothing new has been done to implement the transformative recommendations of the Patterson Commission on education, now 15 months after its completion.

The more than 2,500 early-childhood institutions, about which Patterson’s team and, marvellous to report, now even the Private Sector Organisation of Jamaica accord such importance, are struggling to feed their hungry students. The $40 per capita daily grant for some basic schools and the $120 for the PATH students at infant schools arrive months after the supplies have to be bought, and can’t buy enough, anyway. But parents are encouraged by the Government to believe that education is free. Confused and hurtful messaging.

My informal survey over the past two weeks indicates that school attendance is still hovering below 80 per cent. This is unacceptable if there is to be substance in Nigel Clarke’s hope to attract US billion-dollar investments. Tweaking incentive legislation won’t do it: nor will giving the money people the entire Crown lands and beaches to exploit and chase off locals in some second coming of the bauxite rape or the post-1865 dispossession.

It is only a healthy, trained, motivated workforce that can sustain that kind of foreign interest. Check The Gleaner’s prescient editorial last Tuesday regarding the unattended workforce deficit.

There is irrefutable scientific evidence, to add to the power of plain common sense, that attendance increases when there is food at school. And students behave better, learn more and turn out better.

But instead, we are enacting supplementary Budgets which contain little or nothing more for the change needed in education and training, let alone the thrust to improve the values and behaviour patterns which are indispensable for social peace and prosperity.

Does the public deserve to have a critical say about how effectively the $11 to $13 billion HEART money is being used, especially given Orlando Patterson’s strong recommendation that much of it should be diverted to the early-childhood sector?

We are a confused people. Repression, boogie and consumerism are our gods. We teach our children to crave experiences over relationships. They hear the glowing announcements that everything soon be ‘criss’, but their experiences every day reduces aspiration to ashes.

The food crisis is the most critical daily predicament. In the inner-city communities where I frequent, Sunday dinner for many has come down to rice and plenty gravy, often laced with some MSG-poisoned taste enhancer. Fried chicken skin and plenty ketchup is the alternative menu.

Check the anxiety, obesity, hypertension and diabetes fast reaching epidemic proportion. Jamaica Moves isn’t enough to curb that inevitability. Reasonably priced, nutritious food plays a major part. And that is beyond the reach of the minimum-wage, working-poor majority of Jamaicans. Even cabbage, once a staple, is $200 a pound in some places, and neck and backs are being bought by the quarter-pound. The package of minced beef which cost $375 four months ago is now $790. The lady I know with children, limits each to six squares of toilet tissue per day.

Middle class people are feeling it, too. The same basket of goods ordered from the big wholesale on Red Hills Road has increased in price by $30,000 over the past six months. The $6,000 sneakers bought for the primary-school pickney in September mash up already, and the replacement costs $8,500 (no GCT) at the ‘ben-down’ market. Wrong priorities born of confused thinking make each day harder than it needs be.

An anti-common good, impatient, value-lacking approach to life manifests itself in casual sexual behaviour, in fast-buck-seeking gambling and scamming, as well as the ever-expanding lines in front of the US Embassy.

We are in danger of normalising the fact that the majority of our people, tragically including the little children, will continue to live in poverty – just managing, hopefully escaping, cynical about the potential of joint action, which is the very purpose of every political culture.

What can the current political actors do about this malaise? Play ‘boops’? Well, that’s what most are doing with the confetti dollars added to the Constituency Development Fund for Christmas. But to what long-term end? If your prime objective is to sweep the parish council elections and control municipalities which have argued themselves into such impotence that they cannot handle responsibility for neither public cleansing nor decent cemeteries, what will that transform for the better in the longer run? Is it worth your time?

What a contempt of the probity and potential of local governance that last week, too, the prime minister has to be proposing divestment of waste disposal to private contractors. And will water be next? Confused thinking!

Side by side with all that, the disappointing minister of national security continues to blame the Opposition for denying the country the “rat trap” of the state of emergency, while another minister mumbles about which sections of the Constitution permit the stated intention to legitimise scatter-shot detention powers; the last, desperate resort of every fascist in world history. Let them lose one election and hear how quickly that Sankey would stop sing.

Last, please explain how the police and the court system could allow one million traffic tickets to build up with impunity? And why does it become a matter for Cabinet to determine a time frame for fines to be paid? Surely, the exacting of any penalty imposed by a court is a matter for judicial, not political determination.