Basil Jarrett | For whom the whistle blows 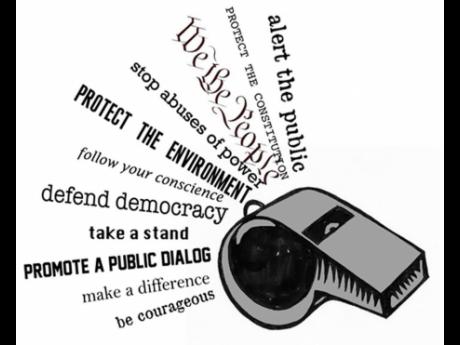 Whistleblowers. Sources. Tipsters. Whatever you prefer to call them, this special group of persons are a conflicted lot. At once, celebrated and praised for speaking up against dishonest practices and bringing about valuable changes to society, but...

Whistleblowers. Sources. Tipsters. Whatever you prefer to call them, this special group of persons are a conflicted lot. At once, celebrated and praised for speaking up against dishonest practices and bringing about valuable changes to society, but simultaneously shunned, harassed and accused of all manner of treachery and crimes against humanity.

It’s a strange dichotomy. Tipsters have been responsible for some of the most important, most beneficial reforms and legislative changes worldwide. So much so that Jamaica passed the Protected Disclosures Act of 2011 to provide guidelines and protections for employees making reports of improper conduct. But for many who have come forward to speak out, there are reports that the initial feeling that their information is valued and will be acted on soon gives way to the reality that they may instead become the victims of reprisals and attacks from the very persons to whom they have reported.

Let us establish first and foremost, who or what the Protected Disclosures Act actually protects. In the eyes of the legislation, a protected whistleblower is essentially any employee, paid or otherwise, who has come forward to report a violation to an authorised body. Presumably, the term was coined to move us away from that other term that carries such negative connotations that I dare not repeat it here.

But even “whistleblower” has its issues. I would probably prefer a more neutral term such as “conscientious discloser” maybe? Yes, it is a bit of a mouthful but regardless of the name you give it, a popular criticism of the whistleblower legislation is that it probably doesn’t go far enough in extending protections to all forms of legitimate reporting and disclosures – tips, leaks, anonymous reports. Nonetheless, it’s a good start.

The act is important because the country is suffering from a lack of confidence in established reporting structures and entities. In some instances, the very same environment that whistleblowing legislation mandates organisations to create is the same environment that will be hostile to the whistleblower in return. Granted, the legislation does attempt to prohibit certain retaliatory actions against whistleblowers, but what it cannot stamp out is the social rejection, isolation and unpopularity that persons may encounter as a result of their conscientious disclosure.

The question then, is why? Why do we love to hate whistleblowers? Why do we immediately view them and their stories with scepticism and hostility? And what can we do to change this, given the importance of persons coming forward to give the tea?

Well for starters, it’s possible that whistleblowers remind us of a reality that we are uncomfortable acknowledging, and to which we would rather turn a blind eye. “Don’t ask, don’t tell” allows us to survive and to keep our jobs and some of our friends. Why rock the boat? There’s also the loyalty issue as people often value sticking together to protect their own interests. Whistleblowers may also stir up feelings of guilt in us. Guilt that we don’t have the same courage to speak out and so we make the whistleblower the target of our ire. By attacking their credibility, we protect our own, perhaps. Sometimes, too, the offending organisation is a beloved institution, a church, a respected public official or a revered group, and we simply do not want to accept that they could have done something so egregious and dishonourable. So it’s easier to blame the victim or the person who is accusing them. Then there is the practical consideration, too, that the whistleblower is possibly lying, making it natural to be sceptical and doubtful.

But it also makes sense to assume that the reports could be true. The FIFA bribery scandals, the #MeToo movement, the Panama Papers, WikiLeaks, and so many local examples of people stepping up to alert us of misconduct, have all strengthened our ability to maintain good governance and to create a safe, just society. If we are serious about creating an open, transparent and accountable Jamaica, whistleblowers and tipsters must be viewed as a critical component. Policymakers, law enforcement, media and civil society organisations must recognise and demonstrate the value that they provide and take tangible steps to empower and to protect them.

I must admit here that I am a bit uncomfortable with the special delineation, treatment and protection that whistleblowers have been given, even if it’s conceptual. I believe that all forms of “conscientious disclosers”, leakers, anonymous tipsters, sources, or whatever name you are comfortable with, must be given similar protections and assurances. Yes, I am aware that unattributed leaks and anonymous disclosures raise questions about an individual’s credibility or motivation, but for the reasons outlined previously, remaining anonymous is an important protective measure. Who really wants to be “that guy”?

To my mind, the best way to address this issue is to focus on the message, and not the messenger. Do I really care if the source of the information is a jilted lover or an overlooked beneficiary to whatever ill-gotten gain is being gotten? The information may have limited evidentiary value in the courtroom, but it can be absolutely critical to investigators and the intelligence community, possibly leading to more courtroom-appropriate discoveries.

There’s also the habit we have of suspiciously viewing whistleblowers as narcissistic self-aggrandising, “holier-than-thou” types. This is interesting because in reality, whistleblowers most often see themselves as simply doing what they are supposed to do, that is, calling out injustice and impropriety, doing the right thing and helping to keep us honest. They do not necessarily see themselves as heroes, chasing recognition or fame, but rather, simply having a deep desire to see a better society.

And that’s why, with tomorrow December 9 being International Anti-Corruption Day, I salute, support and endorse those whistleblowers, tipsters, conscientious disclosers and sources, who continue to uphold courage and integrity in the fight against corruption, criminality and dishonesty. We surely need more of them around.