Editorial | Going after the big fish 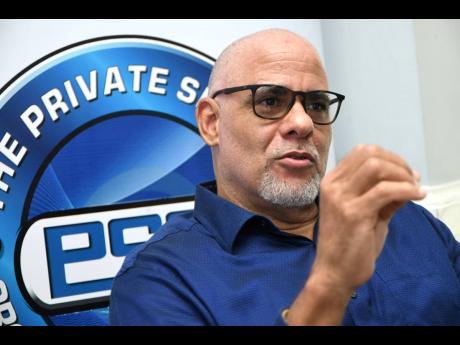 Most Jamaicans will concur with Keith Duncan's lament over the island's anti-corruption agencies' inability, thus far, to land the 'big fish' of shady dealings, and the cynicism that this breeds among ordinary folk.
What Mr Duncan, the president of the Private Sector Organisation of Jamaica (PSOJ), did not address, however, is why, despite the establishment of a seemingly robust anti-corruption infrastructure, they have not done better. That seems now an obvious and legitimate question to ask, and for the organisation which Mr Duncan leads, and the private sector generally, to demand answers.  It has the leverage and, we believe, moral authority to do so – not unlike the private sector's recent flexing of its political muscle over its support of the use of states of public emergency as a crime-fight instrument.
Speaking at a corporate governance awards function for public-sector agencies last week, Mr Duncan highlighted the impact of corruption and crime on Jamaica's economy. Each is estimated to cost around five per cent of GDP annually, or a combined 10 per cent a year.  But making allowances for possible overlaps and double counting, Mr Duncan put the bill at “between $100 billion and $200 billion per year”.


Jamaica's problem with corruption, actual and perceived, is well documented.  The island is ranked 70th on Transparency International's Corruption Perception Index (CPI), with a score of 44, where an aggregate of 100 presumes a pristine, anti-corruption environment.
Countries with scores below 50 are deemed to have serious corruption problems. Jamaica has hovered around the same score for half a decade. Among its Caribbean peers, it is ranked the region's eighth least corrupt country, behind CARICOM partners such as Barbados, St Lucia, and St Vincent and the Grenadines.
Moreover, multiple surveys have found that over 70 per cent of Jamaicans believe they live in a highly corrupt country. Most have little trust in the institutions of the State, such as the legislature and politicians, the judicial system and the police. The army is the most trusted public institution.
It is against this backdrop, with pressure from campaigners, that Jamaica evolved a suite of anti-corruption agencies such as:
• The Integrity Commission, to which legislators and public servants at certain pay scales have to annually report their assets and liabilities. The commission also polices the implementation of government contracts, as well as investigates complaints of public sector-related corruption.
• The finance ministry's Financial Investigations Division (FID), which advises on, as well as investigates, financial crimes.
• The Major Organised Crime and Anti-Corruption Agency (MOCA), a self-declared elite law-enforcement body, whose primary remit is the investigation of corruption and high-level organised crime.
With these institutions, and others in place, Mr Duncan said: “We must begin to catch some big fish now, because our people need to see some examples that it is not only them that are suffering the consequences. They need to know that justice is for all, and not just for some.”
That, indeed, is the population perception – that while a handful of politicians or politically aligned persons have been charged for crimes,   it is mostly low-level people who are caught in anti-corruption nets. When the powerful and influential people appear to be snared, their cases linger, seemingly en route to atrophy.   Or the prosecution and conviction of big players, usually narcotics smuggling and gun-running, happens in foreign jurisdictions, primarily the United States, rather than in Jamaica.


It was precisely to counter the claims of a reluctance to aggressively pursue corrupt public officials that civil society lobbied for the Integrity Commission  (IC) to be given, in law, an independent prosecutor whose authority is subordinate only to the constitutional powers of the director of public prosecutions (DPP).
We anticipate that MOCA will argue that it works closely with foreign partners, and that Jamaica-related cases prosecuted in those jurisdictions are the fruits of their joint efforts. The FID will probably make the same claim.
Nonetheless, there are many matters, some which have been the subject of public reports by various agencies, which lag with little apparent action. The IC, in this respect, might speak about institutional and legislative constraints.
However, in the face of Mr Duncan's observation, the situation demands more than glib assertions. It insists upon a serious and robust discussion to identify gaps, and, critically, to fill them. For Mr Duncan's larger, if unstated, point is that there is a risk of ordinary Jamaicans becoming even more cynical, and are tuning out if they perceive that the power and force of the law are trained only upon them.
The other point is that being governed in a liberal democracy is by consensus.  People expect governments to establish rules and to be fair in the application.  The system demands trust.  If that breaks down, the institutions of government lose their legitimacy, and either authoritarians gain ascendancy or anarchy rules. Jamaica has examples nearby.
Mr Duncan made the point, though, that public-sector corruption is not singular. Usually, it is private-sector officials who offer, or acquiesce to demands for, bribes and kickbacks to public officials.  In many instances, they are Mr Duncan's constituents.
A single call for good behaviour and accountability from the private sector is not sufficient.  The PSOJ must engage in an anti-corruption campaign for its members. It must also insist on legislation for bribery to be a strict liability offence, making it easier to convict firms, if bribery is proved, without having to establish intent.