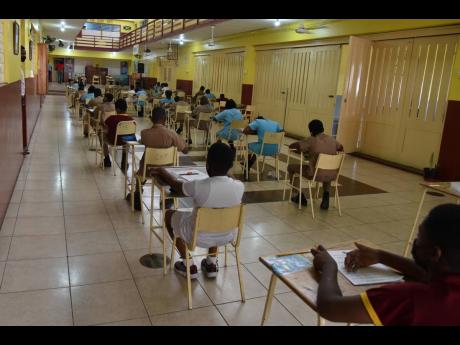 File
In this June 2022 photo, students write the PEP exam.

The first criticism I ever heard of the high school curriculum was that students were not being taught how to file taxes and open bank accounts. The criticism, which I have heard many times since, is usually followed with a disquisition on how...

The first criticism I ever heard of the high school curriculum was that students were not being taught how to file taxes and open bank accounts. The criticism, which I have heard many times since, is usually followed with a disquisition on how students will never need to find ‘x’ in the real life of taxes and bank accounts. It’s unclear whether those who feel this way were swiping credit cards and filing taxes in high school, but I was not.

The focus of our education system, especially at earlier levels, should not be on teaching children how to do random things like kindling a fire using rocks or tying a knot in 30 different ways. However useful these skills might eventually become, they are not useful to a child, and won’t become useful until years after, by which time they would have forgotten 28 of the 30 knot-tying techniques. Subject areas that emphasise lessons on how to do things of a ‘good-to-know’ nature are helpful, but not integral, and can be undertaken later on towards the end of a student’s educational journey.

On the other hand, if the aim of the education system is to get students to think critically and logically and to understand the first principles of problem solving, then our students should have little to no problem functioning in adulthood. With that said, it is somewhat wearying hearing the many suggestions of subject areas that must be added to the school curriculum.

I came across a newspaper article recently which cited seven areas that should be added to the Jamaican school curriculum. The article cited personal finance, African history and mental health as a few of the seven key areas. While all the items which were listed carry some amount of value, the item which really piqued my interest was the recommendation for ‘essential life skills’ to be taught. What is that? What is ‘essential life skills’ and how many skills are we talking about? The description mentioned first aid and basic mechanics as examples.

Again, these are great skills to have. But, do people actually think through the logistics of how an additional six to eight subject areas, important or not, will be added to the high school curriculum without overburdening already overwhelmed children?

Make no mistake about it – our current generation of students face high levels of academic stress, contrary to the popular belief that they have nothing to worry about and nothing to stress over. Simply because students don’t have bills to pay, don’t have goats to tie and chicken to feed every morning and don’t have to walk three miles to get to school, it doesn’t mean they don’t face stress. School has become more demanding with the academic threshold for employment rising and with the cultural norms surrounding education shifting.

Also, let’s be real. Just a few years ago, the GSAT exam was phased out to make way for the introduction of the Primary Exit Profile (PEP). It was felt that students were engaging in rote learning under the administration of GSAT and were simply swatting information in order to pass the exam. The idea was to move away from rewarding students for memorising fun facts they had no appreciation for and mathematical processes they didn’t understand, to instead evaluate them on their ability to reason and figure their way out of problems.

Now, after having abandoned GSAT, we are discussing piling up the early secondary school curriculum with as much information as we suppose our students can digest. For what purpose? To frustrate students even more and increase the incidence of anxiety and depression within our child population?

Knowledge is generally a good thing but children have no need for storing up information that they are not ready to use. Civics, public speaking and time management are all very important, but so are the other topic areas currently being taught. Our students are finding it hard to manage and we owe them a break.

The other thing is that what people really mean when they say these areas should be taught in schools is that they should be mandatory for all students. For the record, the only two subjects that are typically mandatory in Jamaican schools – mathematics and English language – are, in my estimation, the most critical for survival in the Jamaican economy. Without commenting on the propriety of making subjects mandatory, we certainly don’t need any other mandatory subjects.

In any case, what this discussion does highlight is that almost all of us have some idea of how the school curriculum should be designed. But, the buck has to stop with someone. Who or what is it that determines what our national curriculum should look like? Perhaps a rationale behind the current structure of the curriculum would go a far way in bringing clarity to a perennial debate.