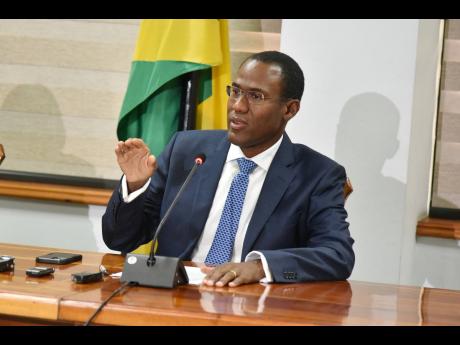 It isn’t clear whether Everton McFarlane jumped or was pushed from his job as executive director of the Financial Services Commission (FSC) and if his sudden departure was directly related to last Wednesday’s disastrous press conference about the crisis at Stocks and Securities Limited (SSL), or to the FSC’s broader ham-fisted handling of the affair.

Either way, Mr McFarlane’s resignation – except as an act of principle by the person who oversees the day-to-day operations of the FSC – achieves little. It fails to answer important questions on the actions of those above him – the commissioners and minister of finance.

The questions relate to issues upon which Mr McFarlane preemptively foreclosed discussion at Wednesday’s briefing – such as what did the FSC know about the state of SSL, when it knew, and more critically, what action it took to prevent SSL’s deeper downward spiral and to protect the investing public.

In this regard, we welcome Finance Minister Nigel Clarke’s promise of “full transparency around the Financial Services Commission and its role and decisions in this matter”. This, of course, must include Minister Clarke’s own actions, if any, in the affair, as well as those of his predecessor(s).

As it happens, the FSC knew much that was discomfiting about SSL long before the recent turn of events in which nearly J$3 billion is reported to have been stolen, or otherwise siphoned from clients’ accounts. The focus of this matter has centred on a single employee, who apparently signed a statement admitting to fraud.

However, a document in circulation, purportedly the one signed by the former employee, itemises removals from clients’ totalling approximately 20 per cent of J$739.4 million that was under her management, was ostensibly stolen. Put another way, less than J$150 million, or under five per cent, is unaccounted for. Which makes it important that the investigative agencies pursue their search in a thorough fashion to, as Dr Clarke promised, “Wherever it may lead”.

Thoroughness, however, doesn’t necessarily mean at a snail’s pace, to the point where matters – the victims included – atrophy and die.

In the meantime, if the badly shaken confidence in the financial sector is to be restored, and trust rebuilt in the FSC as the regulator of brokerages and investment houses, the authorities have to come clean about their past actions relating to SSL and the reasons therefor.

An internal FSC document obtained by this newspaper, and published last week, showed that the SSL had a yearslong systemic problem of weak internal oversight, regulatory breaches and capital/equity adequacy.

SSL is a private company whose financial statements are not readily available. That made it more important that the FSC maintain rigorous oversight so as to protect investors who entrusted their money to the company.

However, the FSC’s document painted SSL as a company with systemic failures in its internal oversight, including being late in filing its annual accounts.

By the end of June 2016, the FSC’s document shows, SSL had an accumulated deficit of approximately J$1.5 billion and its auditors were warning of the “existence of material uncertainty that may cause doubt of the group’s and company’s an ability to continue as going concerns”.

That was a huge red flag about which SSL’s clients knew nothing. SSL’s balance sheet, on the face of it, would have demanded a major capital injection. For a relatively small company, a deficit of J$1.5 billion was very likely to have represented nearly all, if not more than, SSL’s shareholders’ equity.

At the behest of the FSC, the company supposedly restructured itself. But judging from the commission’s internal document, the operational failures persisted at least well into 2017.

Further, it was three years after the shakiness of the company’s capital base was flagged it was announced that Zachary Harding’s Hyperion Equity Inc had taken a minority stake in SSL. What amount of capital/cash injection, if any, that deal brought, was not disclosed.

In other words, SSL’s existing clients, and potential new ones, were kept wholly in the dark, even if it might be argued that the public could have reasonably assumed that the departure of at least one senior manager and the post-Hyperion offloading of some SSL assets was an effort at right-sizing its balance sheet. Investors, however, would have had to work that out for themselves.

While this newspaper appreciates the delicacy of financial markets and the care that has to be taken to prevent contagion, we also are clear that markets work best with the transparency and the availability of information.

In any event, the FSC’s job is specifically to establish the regulations to which investment houses must abide, and to monitor them to ensure that they do.

Indeed, Section 6 (1) of the Financial Services Commission Act makes it clear that the agency exists “for the purpose of protecting the customers of financial services”. The law gives the commission a broad sweep of powers with which to do so.

The commission, it must be noted, isn’t solely the executive director, notwithstanding that it is a powerful position. The holder of that post is an ex-officio member of the commission, made up of between seven and nine members appointed by the minister of finance.

It is the commissioners, inclusive of the executive director, who set the rules. It is highly unlikely that an executive director could, or did, make major consequential decisions without the knowledge or imprimatur of his governors.

Further, the commission must at least once a year (and as often as it sees fit), review the operations of the companies it regulates and “within 90 days of the examination report to the minister the results of every such examination and any such report may contain recommendations as the commission considers necessary to correct any malpractices or deficiency discovered in the examination”.

Ministers of finance ought not to be in the dark about reviews of investment houses. So what, if anything, did the commission recommend to the minister(s) about SSL?