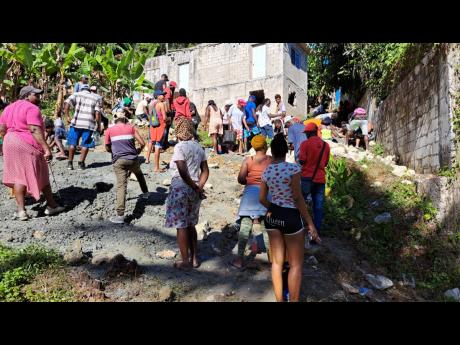 Hopeton Bucknor
Residents of Chester Castle, Hanover, digging in the hope to find gold in a section of the Top Land community.

Several weeks ago, Chester Castle in Hanover became a very busy place when residents thought that they had discovered gold during the digging of a sewage pit on a residential plot of land. However, the Mines and Geology Division in the Ministry of Transport and Mining determined that the substance found was pyrite and iron sulphide. Pyrite is otherwise called ‘fool’s gold’.

It was interesting, and somewhat sad, to see news clips of people feverishly digging away at the rocky soil. Each gleefully voiced their genuine belief that there was a fortune to be had, and that their lives would irrevocably change for the better almost overnight. They invested and expended an unusual amount of energy and time mining the ‘gold’ in the expectation that it would bring positive returns. Their desperate need to escape the cycle of poverty, hopelessness and resultant violence all hinged on the ‘gold’ that they thought they had discovered.

Although all that glitters is not gold, no amount of media information could convince them that the substance that they worked so hard to mine, the substance that gleamed in their eyes, the substance that would save them from the hardships in their lives, the substance that was going to bring financial security and happiness was in fact not gold. Several opined that the Government was employing an elaborate rouse to get them to stop mining activities, so that the State could move in and mine all the ’gold’ for itself. They held out hope until the final nail was driven into their metaphoric coffins…all precious metals discovered, anywhere, belonged to the State.

I found similarities between fool’s gold and how some people view politics. For many Jamaicans, who are not capable of independently supporting themselves, or those that want to be very rich or wealthy, politics provides a pathway to achieving their goals in life. Politics gleams in their eyes because by simply aligning themselves with a political entity, they may accrue many significant benefits. However, it is dependent on who holds the reins of power. Hence the polarisation, hostility/violence, corruption, and perennial poverty among our citizens.

Political alignment takes several forms. An indeterminate number of people align with an entity out of a deep and genuine yen to serve their beloved country. They see one political entity or the other as being the best route through which they can serve effectively. Some have a long family or social history of alignment with a certain entity, and they maintain that relationship, no matter what. Those make up the die-hard ranks of political supporters, contributors, and workers. Some of these people are willing to take leadership positions, to the point of sacrificing several aspects of their personal life, and even finances.

However, for many, the lure of the gleam and (promised) high returns of political alignment pull them into the political arena. These people have ulterior motives in mind. For the rich, it may take the form of contributing financially to ‘the cause’. Their contributions ‘buy’ them a seat at the table. It may be a virtual seat, but it is a seat nonetheless. They have a voice and are taken into consideration when it comes to policies, decisions, and sometimes contracts. Big decisions can make or break businesses, so the more well-off citizens sometimes hedge their bets by surreptitiously contributing to both political entities.

For the poor, it usually takes the form of demonstrating allegiance to their political entity. They do that by turning out to demonstrate support for their ( de facto) benefactor. In all instances where there is political alignment for benefits, there are symbiotic relationships. Making up visible numbers at political rallies can get poor people a T-shirt, alcoholic beverage, a bit of spending money, and a free ride to hours of fellowship.

Obviously, in one way or the other, the ‘benefactor’ expects returns on the investments made in underprivileged supporters. They expect huge turnouts at rallies and meetings, vociferous proclamations of fealty, a spreading of the word to recruit others, and, of course, those returns ultimately culminate in votes on election day. Conversely, the supporters expect returns on their ‘investment’ in the political entity in the form of financial support for their shortfalls in paying bills, school fees, grocery bills, utilities, medical necessities, and so on. Some also expect protection and temporary jobs whenever these arise, or permanent employment.

Some people crave the power that comes with being in the upper echelons of any political machinery. It carries celebrity status, and some like to bask in it. The popularity and recognition enthral them, and their personalities are drawn to them like moths to a flame. That type typically goes along for the ride, and rarely brings anything to the table, except their presence.

But, like fool’s gold, politics can be deceiving. It is pretty and very attractive to some people, and usually entails a lot of time and effort to work at it. Many see it as a gold mine but, for them, it is only fool’s gold because the promises of fame and wealth are elusive. Even if the promises made are genuine, they are sometimes unrealistic. Many remain underprivileged and live day-to-day by handouts from one source of support or the other. And if perchance someone does produce something golden (fantastic, profitable, and beneficial)...it belongs to the entire nation, just like real gold.