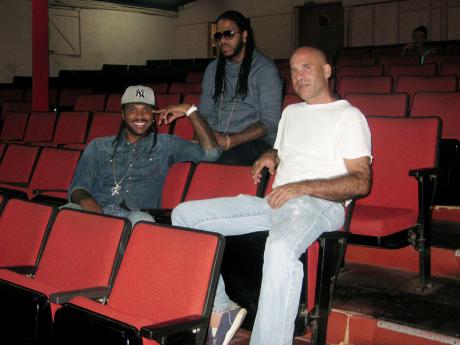 Bruce Hart (right) with the Twin of Twins. 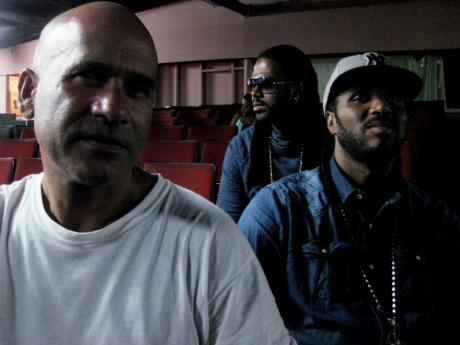 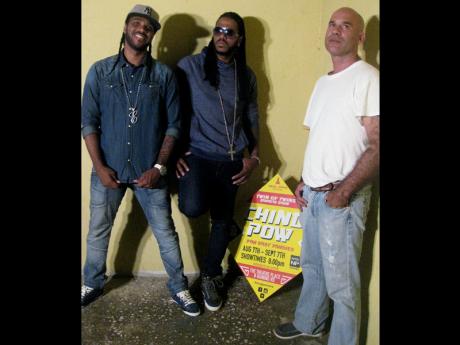 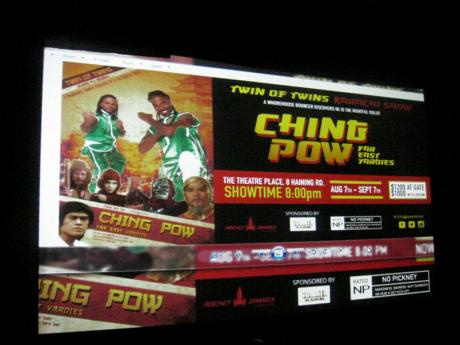 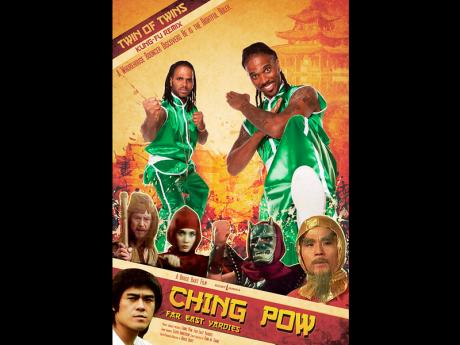 The finer points of distinction between a cinema and a theatre are often overlooked in matters of audiovisual dramatic presentation in a public setting. For while the theatre is for plays and the cinema for movies, in Jamaica the general public goes to the theatre - as the cinema is labelled - to watch movies.

However, until early September, after an August 7 start, it is correct to say one is going to a theatre - the Theatre Place on Haining Road, New Kingston - to watch a movie - Bruce Hart's Ching Pow: Far East Yardies, with voices done mainly by dancehall duo Twin of Twins. So, for example, Bob Marley becomes a martial arts guru.

Makeda Solomon, Toni-Ann Thomas, Mumzel and Melissa Fearon do the many female voices required for a script that involves a house of ill repute.

Ching Pow is an edited compilation of the 1980s Taiwanese trilogy Ninja Death, with the dialogue reshaping the resulting film in a distinctly Jamaican direction, both in plot and language. There had to be another kind of connection between Taiwan and Jamaica, though, Hart saying, "We had to get in touch with the producer, who we are in negotiations with, and I am confident everything will be in good order."

Hart said in debuting Ching Pow, the standard cinema release route was one of two options considered, but discarded. One factor in that decision was the large percentage of the gate which the cinema takes, which Hart pointed out is an industry norm.

Then there was the route of using a theatre, "… but adapt it to fit viewers in the way that Stages does it. They show at venues around the country and then tour the play abroad.

"It gives us more flexibility to show with a wider reach and hit markets that we can take our product to, even as far as the countryside in Jamaica and, internationally, to the Jamaican markets abroad."

It is not only in Jamaica that Hart is taking the route far less travelled for film. He makes it clear that outside the country, he is also not going through the conventional avenues - one well traversed by Jamaican cinematographic output from Perry Henzell's 1972 Harder They Come to 2010's Better Mus' Come and many in between and subsequent.

"Our interest is not the film festival circuit," Hart said, although, in Jamaica, a few scenes of Ching Pow were shown at the Kingston on the Edge (KOTE) Urban Arts Festival in 2010 and the film will be screened at Great Huts in Portland next weekend as part of the festival of Jamaican films there.

Hart said: "It is just a practical appeal to people. It is not about trying to get a medal. It is about getting something real and strong and unfiltered," Hart said. So there was no consideration of ratings, but "just go for what is good and real and push the edge of it".

And strong and unfiltered Ching Pow: Far
East Yardies certainly is. The Twin of Twins (Patrick 'Curly
Lox' Gaynor and Paul 'Tu-Lox' Gaynor) were true to themselves in doing
the dialogue and would not have had it any other way, the two having
some caustic words for some of the on-screen fare
available.

It did not hurt that they are 'kickers'
fans, Tu-Lox saying, "We used to go Odeon (in Cross Roads, St Andrew),
before them build the bus park." Curly Lox adds the names of some
big-screen martial arts stars. "We know Bolo, Bruce Lee, Carter Wong,"
he said.

They also make the Far East connection with
dancehall, referring to the song of that name done by Barry Brown in the
1980s. Mighty Crown sound system, which is dubbed The Far East Rulers,
"just make it more popular in the dancehall era".

In
doing the Ching Pow dialogue, they went uncensored -
as they believe it should be. The film is rated NP - a self-imposed No
Pickney. This is in a context where, Tu-Lox said, "they are trying to
contain people who are the creative people in Jamaica, which is the
ghetto people".

They have used the dancehall channels
to push Ching Pow.

"To spread the
word about this film, it was not hard," Tu-Lox said. "When we put up the
first trailer, the response was overwhelming."

They
have also gone to the live dancehall space ("You can't depend on social
media alone," Tu-Lox said) to let people know about the film, Curly Lox
saying that they had stopped at a dance and simply walked in, gone to
the microphone and let the people know about Ching Pow
in their unique style and voices. It was not the only
dancehall stop.

There is another dancehall connection
with Ching Pow. Condom brand Slam, which made a
splash with Dancehall Queen Carlene, is a major sponsor, through its
Goliath product.

"We are thinking of MoBay first, but we
are basically going to see what the market and appeal is for this month
is, and it could be as far as London. Jamaica and the Caribbean and
promising. It could be on to the Caribbean, London, New York, and so
on," Hart said.

"We are going to take it on tour, like
a play or dancehall product."