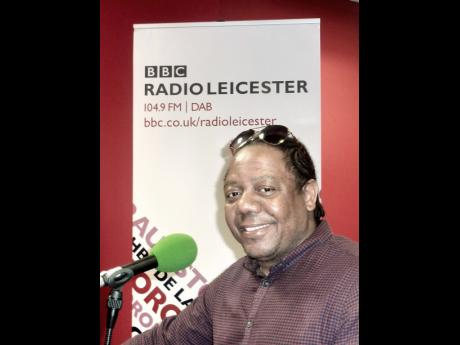 While there, Contractor, who is also part of the marketing team for reggae music label, Downsound Records (DSR), not only promoted the label’s artistes, but also took the opportunity to make a welcome return to the stage, he being an artiste in his own right.

“I did numerous television and radio appearances. I was on BBC London, BBC Three Counties. I was also on BBC Leicester,” Contractor told Entertainment Avenue.

“This national medium allowed me to not only promote the music, but also get into the marketplace and form alliances. So from this I hope to form more alliances and do more business throughout entertainment. It was a good experience. I played the role of marketing person and also the role of an artiste, which is how I got into this business initially.”

Contractor performed at Bristol Carnival, Notting Hill Carnival, and at the One Love Music Festival, where he performed on the Saxon Sound with Mikey General. Several other artistes were there, including the late John Holt, who died a week ago, Contractor said.

“It was the experience that we wanted to get in the UK and European marketplace, get a deeper hold and understanding of the marketplace. From this, I hope to make more alliances and do more business in the future.”

While in the UK, Contractor witnessed first-hand the fruits of his labour, with DSR artiste Ishawna topping an ethnic chart there with her single, Need Love, and an increase in demand for her and other DSR acts.

“She is in demand there, Ninja Man is in demand also, calls are coming in for him and we’re waiting for his court case to clear up. Nature is also in demand over there and we have a new youth in the camp name Don Husky. I myself have been invited over to perform at some festivals in Europe next year,” he said.

“It was a very, very good experience and I learnt a lot. The alliances that I made in the media are very important because I developed a relationship where I can now send them music all the time and get airplay.”

His extended sojourn also exposed him to the stark reality of how difficult touring can be, along with other factors.

“It’s not easy out there on the road so when people see artistes come back on the road, show them respect and don’t try to tear them down or tax them,” he suggested.

He went on: “While I was away, I looked at other music genres, not just reggae. I saw where you would go to a concert like the Glastonbury Festival, where you see thousands of people come out, pay big money, £50 up, to hear good music. Some of these artistes, the people don’t even know them, they just make good music and promoters put them on the line-up. Then when I look at Jamaica, I don’t see enough unity. I would really like to see much more unity. When the artistes are united, they have a lot more income and a lot more power.”

But even though he was away for months, Contractor kept his local links intact. Contractor Music Marketing collaborated with Irie FM for the Marcus Garvey Birthday Celebration and the live broadcast of the Reggae Girlz in their World Cup campaign.

Now that Contractor is back, the work continues.

“Downsound has some new projects. Being a member of the KLE Group now, Mr Bogdanovich has stakes in some nightclubs in Kingston and the main project he has put me on, already, is Club Famous in Portmore, to generate capacity crowd every weekend.”