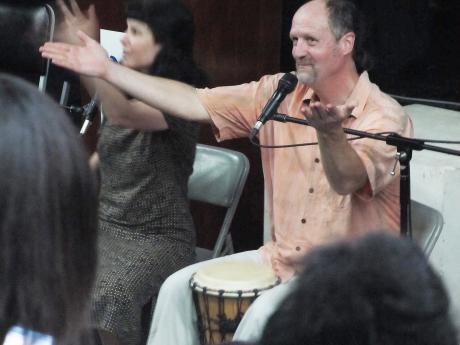 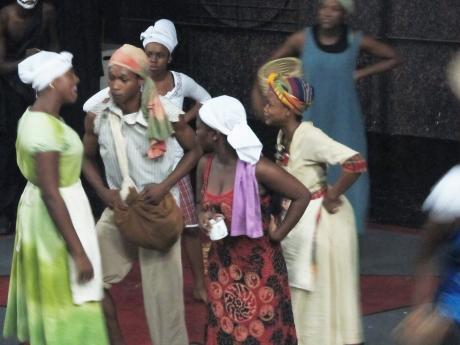 "One storyteller is a book, but a host of storytellers is a movement," Amina Blackwood Meeks, organiser of National Storytelling Festival told the audience of mainly high-school students at an Anase Sound Splash 2014 Storytelling Conference recently.

"Storytelling is more than ha, ha, pop a joke and laugh. Storytelling is more than 'once upon a time'. In fact, the first story cannot be 'once upon a time' as that was the first time it happens," Blackwood Meeks continued to inform her listeners. She explained that it is after the retelling of a personal story by three or more persons, that the use of the opening phrase is justified.

"Through the conference we want to tell more than just stories. We want to deconstruct, we want to interrogate. Is there more to our folk tale than just sitting down to have a laugh?" She asked, rhetorically.

Through interactive presentations from America-born Denise Valentine, story crafters Jerry and Barry, and Trinidad-born Eintou Springer, the audience would find the answers.

Valentine was first. In a projector-aided presentation, under the theme, 'Creating New Stories from Archives', she shared the importance of research to the telling of stories by speaking of the disadvantage of African-Americans whose stories are tied up in paper. She wanted to change that image of nonentities through storytelling. Storytellers are the keepers of the culture of a people, according to Valentine. She concluded her presentation with the reading of one of her stories to illustrate her point.

Under the title, New Twist on Old Tales, the story crafters said they begin their storytelling with stories that people already know and then twist it as they go along, not only in a poetic way, but also incorporating popular slangs and sayings. They too demonstrated by retelling the story of Goldilocks and the Three Bears, and Cinderella. The husband-and-wife pair, whose storytelling style of having one beginning a sentence and the other finishing it, also said that there was a historical relevance to rap music, which they believed was influenced by the oral tradition from Jamaica and the African griot.

But it is Springer's presentation that the discussion on storytelling will be 'passed on' to others. The wily storyteller began her presentation as a true griot. "Crick", she said to the audience's reply of "Crak". Before saying that "storytelling is to give us recognition ... take us out of the backdrop; it is to remind us that African people have a history, they have a culture." But the language of the Caribbean people must be changed, likewise attitudes to the stories, she implored. One way to do so, Springer argued, is to configure Ananse as a strategist. She, too, concluded her presentation with the reading of a story on How Anase bring the Drums.

The short and informative conference concluded with a presentation of a scene from Derek Walcott's Dream on Monkey Mountain, performed by students of the School of Drama. It was held in the Dennis Scott Studio of the School of Drama at the Edna Manley College, recently, during the inaugural National Storytelling Day.

It was one of two such events added to the rebranded and renamed storytelling movement that began in 1998. The rebranding took place three years ago. This year's storytelling conference was dedicated to the Rt Excellence Marcus Mosiah Garvey "who articulated the first cultural policy in Jamaica," according to Blackwood Meeks.