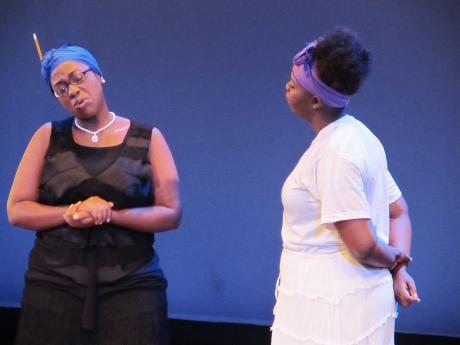 Marcia Rowe Sasha-Lee Hutchinson as Justice's wife speaks to her church sister about his disappearance. 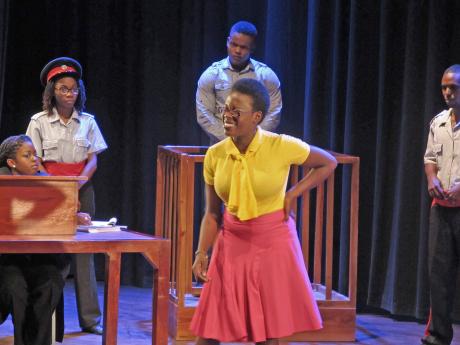 Justice was put on stilts on Sunday. In a production titled Silk: Wanted Justice, staged for the Norman Manley Law School Students' Association (NMLSSA) annual fundraiser, the well-thought-out play was loaded with satire and bawdy humour. The players, the Sebastian of law, members of NMLSSA, were generally believable throughout the production. At the heart of their successful movement were creative and purposeful decisions from directors Damion Radcliffe and Tesfa Edwards.

Wanted Justice was penned by Dwight Sibbles and mounted at the home of the creative arts, The Philip Sherlock Centre, on the Mona campus of the University of the West Indies.

The production commenced with a call-to-attention tableau that segued into a dance. But the opening scene takes place in a courtroom setting. It is a case that has been brought to court before.

And told through a flashback, the story, in brief, is that Justice is missing. As the plot progresses, it is discovered that Justice is killed (not seen) by West Himdies - Justice, played by Jermaine Anderson. The reaction to this varies from group to group. Some chose to demonstrate, some prayed, while others just spoke about Justice. For the ordinary man, Justice was 'hope' and the wealthy found 'faith' in him.

Subsequently returning to the present, West Himdies is brought to book, where he makes some improbable, but not unattainable promises.

On a whole, Sibbles' script was quite entertaining, as he drew on local phrases and characters for his satire. His quest to answer his own question: "What if Justice was a relative, instead of a system?" and his concluding scene also gives cause for pondering.

The language of the characters, while heavily laced with legal jargons, in some instances, was creatively written and offers wit. However, the plot was a bit patchy and the role of the narrator could have been better defined.

The large cast - members at times playing multiple roles - was convincing throughout. Their intentions for their respective roles were clear, and the general required emotional effort from each was exciting, dramatic and theatrical.

Radcliffe and Edwards directed well, and stayed true to the non-realistic style of the play in set, entrances and exits. They were able to make the obviously talented but non-professional actors move naturally on stage.

Silk: Wanted Justice was preceded by performances from the NMLSSA dancers and choir, and 'poets'. Each item performed was true to the theme of the production, the cry for justice. The proceeds from the play will go towards welfare and scholarship for students of the Norman Manley Law School.