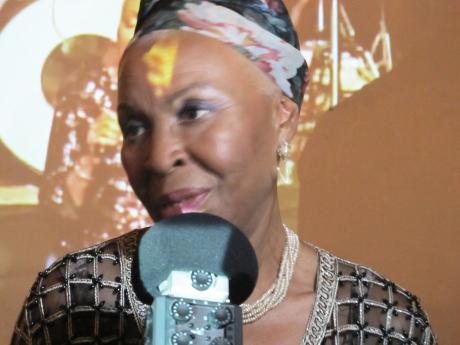 It's all systems go for Simply Myrna: Myrna Hague in Concert, as the event, now in its fifth staging, was launched on Thursday at the Hotel Four Seasons, on Ripon Road, St Andrew.

Specially invited guests mingled, listened to music by Hague and other jazz vocalists, and viewed videos of past concerts. Subsequently, representatives of the various stakeholders addressed the gathering.

Lennon 'Lenny' Crooks, producer of the show and MC at the launch, was first on stage. He expressed amazement at what he said started out as a dream to become successful. He announced that Myrna Hague would be sharing the stage with A.J. Brown and the colourful Carifolk Singers, along with guest artiste Dobby Dobson. However, he noted that it was no walk in the park in booking Dobson, who will be making his second appearance, and Brown, who now performs with Third World Band, but is currently between gigs. Everyone will be backed by a

10-member band that will include Rupert Bent, Desi Jones, and Chris McDonald. Once again, the music for the show will be arranged by Ralph Holding Jr, who will also conduct.

In addition to thanking the main sponsors, he also paid

tribute, in an anecdote, to last year's guest artiste, John Holt, who has since passed.

Hague, in her address to the audience, was a little emotional as she shared her feelings on returning to Jamaica after spending most of her life in the United Kingdom. She said when she came back to Jamaica, she did not do so with a great sense of enthusiasm as there were many challenges that she had to hurdle, but now she is glad she stayed.

As to what patrons can expect from her at the concert, Hague said there would be some new, original songs, as well as songs that have not been performed in a long time, including "one in particular that was not heard after it won a certain competition, plus something that I have written and never heard before".

Simply Myrna: Myrna Hague in Concert is scheduled for Saturday, March 7, 2015, at the Courtleigh Auditorium, New Kingston. Showtime is 8 p.m., and part proceeds will go to the Sonny Bradshaw Foundation.