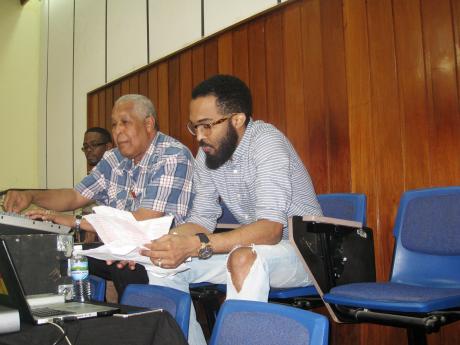 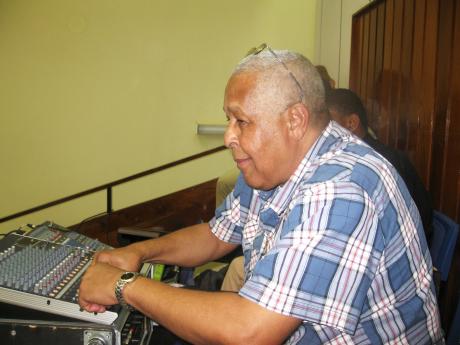 File
Lloyd 'King Jammy' James at the mixing board during his interactive session at the University of the Wes Indies (UWI) on Thursday. 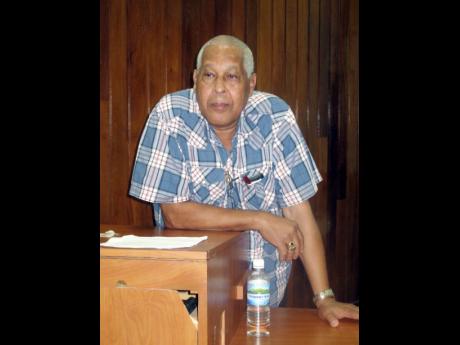 File
Lloyd 'King Jammys' James listens intently as a question is asked at the Neville Hall Lecture Theatre, University of the West Indies (UWI), on Thursday
1
2
3

The tall figure leaning forward, listening intently to a question from an audience member and a hint of a smile playing at the corners of his mouth complementing a near beatific expression, was almost irreconcilable with the renowned fierce sound system warrior.

Then, when most of the talking was over last Thursday evening, Lloyd 'King Jammy' James moved from the podium at the Neville Hall Lecture Theatre at University of the West Indies (UWI), Mona, to the uppermost row of the room. Using the mixing board as his instrument, from the 'Sleng Teng' riddim to cuts from Garnet Silk, John Holt (Carpenter), Frankie Paul (Sara), Cocoa Tea and Shabba Ranks, among others, plus a remix from his earliest Black Uhuru album Love Crisis, featuring Bounty Killer.

That album is being redone, combination style, with a number of artistes, also including Alborosie and Chronixx.

When he ended the final song, it brought this year's Reggae Talks series, presented by the UWI's Department of Literatures in English, whose Professor Carolyn Cooper did hosting duties, to an end.

Before the music came the memories, in a tale that went from the city dump to Canada and back, from dub to dancehall, Jammy making it clear when he stopped with the creation of 'Sleng Teng' that his talk was a small part of his story.

He used to go to the dump to get parts, Jammy said about his earlier years in electronics. Then, it was on Foreshore Road (now Marcus Garvey Drive), not in Riverton. Keeping a close link with a preceding musical monarch, Osbourne 'King Tubby' Ruddock, was crucial to his development.

"From there, as Jamaicans would say, I buss out," James said. "I fell in love with music. Electronics and music are together."

James smiled as he remembered the Waterhouse-based Ruddock having a pirate radio station, Tubby's Radio Station (TRS), and taking over the Jamaica Broadcasting Corporation's (JBC) frequency one Friday to play the ska song Let George Do It.

"The following day, soldiers and police were looking for where the transmission was coming from," James said. The pirate station was quickly packed away.

At Tubby's, James said, "We began to build amplifiers." They were for Ruddock's sound system, King Tubby's Hometown Hi-Fi, which James would 'string up' (connect all the equipment and ensure the sound quality was good) until "U-Roy would come and start deejay."

Naturally, James wanted to build his own sound system and one Christmas he went to a Mr Chin he had met and asked to borrow a speaker, for which he built a 10-watt amplifier. Then, James said, he went into his area and "play two tune". It was 1962 and what would become King Jammy's Super Power was born.

Still, James said, "I did not know people would want me to go to play." That changed when there was a send-off dance for someone and the sound man did not turn up. James was asked to fill in "and the dance ram". He was encouraged to add boxes.

He migrated to Canada in 1970, got a job in electronics with a Chinese man and moved into his own business, fixing amplifiers in a friend's basement. He put together a sound system for Duke Reid (not the Treasure Isle producer from Jamaica) and decided to build his own. With Tubby sending him pre-releases from Jamaica, it stood out.

Then, one day while he was in Canada, producer Bunny 'Striker' Lee and bass guitarist Robbie Shakespeare turned up and encouraged him to return home. He did on the spur of the moment, succeeding Phillip Smart as the engineer at Tubby's studio. Working with and learning from a number of producers, he wanted to get into production himself.

"There was a lot of young talent in Waterhouse," he said. Included was Black Uhuru. Lee said he would give James any rhythm he wanted and go to England with the music. And that is how eventual Grammy winners Black Uhuru's first album, Love Crisis, eventually came about, while there were recordings by artistes like Purple Man and Tulloch T.

The first trip to England was made with Bunny Lee in 1977, sound operator in England Fat Man getting the ticket. A deal was struck with Third World Recording Company, which paid special attention to Black Uhuru. The payment for the tracks was £1,200, which James used to buy a two-track machine and microphones.

That went into a back room at his wife's place and the studio was born, Wayne Smith and John Wayne among the artistes he recorded, then it was back to England in 1979, this time to Greensleeves.

James went on to tell the story of the 'Sleng Teng' rhythm, the respect he is accorded especially outside Jamaica. "It has been a long journey for me. I been through rough times, through good times ... I tour every year; Jam 2 (one of his sons) and myself doing a dub mix," he said.

And James recognised Tupps, the first selector for King Jammy's Super Power. He was so small at the time that he had to be lifted and put on "two beer box" to reach the sound system's controls.