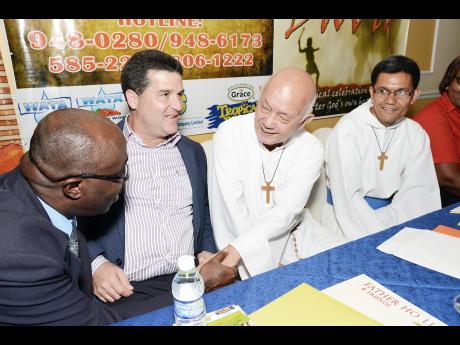 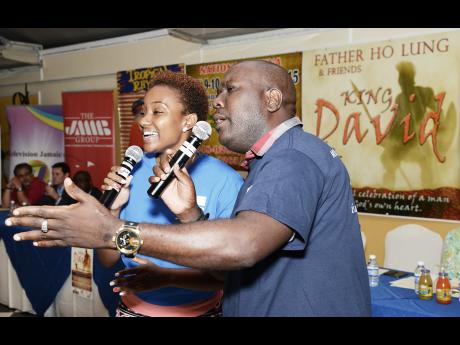 Rudolph Brown
Jhanelle Davis and Lerry Marshal sing at the Missionaries of the Poor and Father Ho Lung and Friends' grand press conference and media launch of 'King David' at Terra Nova All Suite Hotel in St Andrew on Tuesday.
1
2

"People need to hear good news, and all of you are part of that good news," Father Richard Ho Lung told guests at the Grand Press Conference and Media Launch for the musical, King David: The Celebration of a Man After God's Own Heart, scheduled to open on May 9, 2015 at the National Arena.

In what amounted to a sermon in parts, the founder of Missionaries of the Poor (MOP), and the composer and producer of the production, also informed, "We are here to celebrate the positive of Jamaica. God has given Jamaica an abundance of gifts. The problem is how to keep our people positive and optimistic. I do not believe brothers and sisters, frankly, that it will be done by bacchanal and carnival."

The launch, which took place at Terra Nova All-Suite Hotel on Waterloo Road, on Tuesday, commenced with a lively praise and worship session, followed by an opening prayer from Very Rev Bro Augusto Silot, MOP, and welcome and greetings from Father Brian Kerr of MOP.

Along with Father Ho Lung, the strong contingent from media houses, sponsors and other specially invited guests, were also addressed by representatives from major sponsors and patrons Wisynco Group Limited and Grace Foods and Services Company Limited. Guests were also treated to musical selections from Father Ho Lung and Friends.

William Mahfood, chairman of Wisynco, after acknowledging the presence of the children cared for by the MOP and the Brothers, noted, "I don't know where you will find so many competing companies sponsoring the same event, It speaks volumes to, first of all, Father Ho Lung's ability to squeeze money out of sponsors, but more importantly, it is causes like MOP and the work that they do, that make people feel so grateful and want to participate."

He continued, "One of the things that Father Ho Lung has done over the years, is to inspire us in so many different ways. One of the key inspirations for the founding of Food For the Poor was MOP and Father Ho Lung's work."

In concurring with Mahfood, consumer service manager of Grace Foods and Services, Angella Grandison-Reid, added that her company has been with Father Ho Lung and friends for the past decade. They were delighted to be partners once again with the MOP through their Tropical Rhythm brand. "It is a Labour of love." And she implored all to come out and see the production.

And the organisers promised that King David will be worth seeing. It will be passionate, full of love, and magnificent. This proclamation was further reinforced in the showing of a well-produced music video that featured Shaggy, Tarrus Riley, Sly and Robbie, Lenky, Father Ho Lung, and friends performing Rise Up Jamaica, from King David.

Singers from Father Ho Lung and Friends also gave a taste of what is to come. It came in the form of an energetic performance of The Lord's My Shepherd, among other songs.