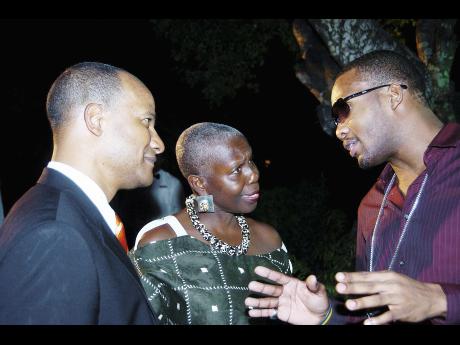 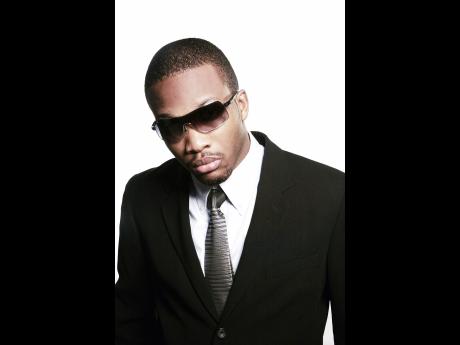 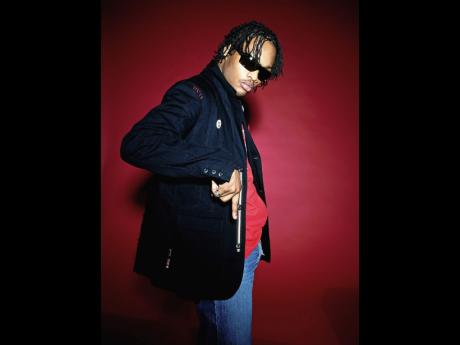 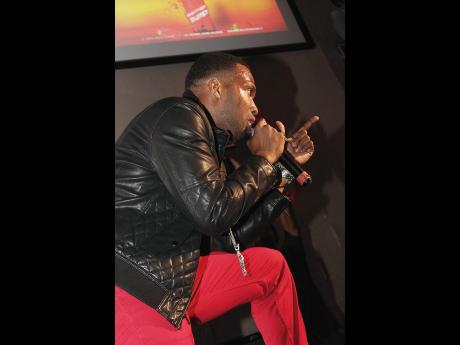 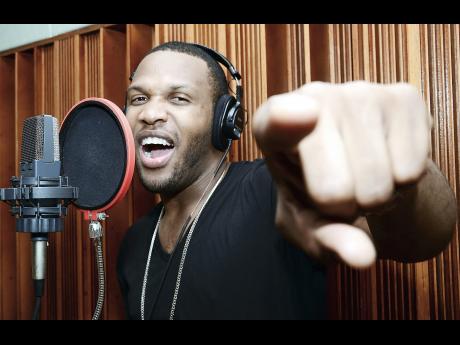 I HAD immense regard for Assassin as a lyricist from very early in what I know of his recording career – which means that there may be parts of the story that I do not know about. Years before he attached Agent Sasco to his name, it was the lines in Girls Gone Wild from the early 2000s which first struck me and stuck with me (because y’all know that there are lines which strike like a flash of lightning that does not touch earth, just a momentary spark).

In naming his material possessions that impress the ladies, Assassin said, “An’ mi shoes, reptile, yeah man, straight crocodile.” He went on to talk about the Jag with the $6 million price tag, then commented “when them see the seat with the burberry plaid gal start carry on like a travelling bag.” (In case you don’t get it, think aeroplane and carry-on.)

And I said this youth tough – as I would expect coming from outstanding lyrical pedigree as someone affiliated with Red Square, because Spragga Benz is the lyrical general – listen to Sleep With Angels and Peace, among many, many others.

It was not a fluke either, as from that time in the early 2000s until now when Assassin has had a couple spots with American artistes like Kendrick Lamar, Kanye West and Raekwon, a decade and half later, he has maintained his standard – in more ways than one. For not only has Assassin kept his lyrical output immaculate (listen to Mix This from late 2013 an’ tell if da tune deh nah clap like a rifle mix wid a shottie), but he has refused to be distracted from his chosen path.

As he said in Roughest on the Diwali riddim, his attitude is to “neva put a hype ova whe we obtain/Jus a work cause we have a standard fi maintain.”

So while I enjoyed Assassin’s music immensely (how could I not admire the swag of someone who, also in Roughest, said “Nuff a compare an en’ up a complain/2001, try dat yu voice strain/Neck string buss up an a bawl fi back pain/My engine’s running off a higher octane”), I respected him for something I heard him say in a TV clip when he refused to take a route that so many had travelled before him. With himself and Vybz Kartel coming through at about the same time, as usual there were comparisons and Kartel tried to make it a clash.

This was in about 2006 and Assassin refused to take the bait. I cannot quote from the interview which made me see Assassin in a new light, but he said something to the effect that if he is going from Papine to Half-Way Tree, what is he doing in Harbour View. And I thought, damn, not only is he a good lyricist, but he also actually has nuff sense. Cause nuff man can spin a beautiful line and do some damn stupid things.

Nearly a decade after Assassin refused to clash with Kartel, he has long been proven right and, extending his analogy of a physical journey, has long passed Half-Way Tree in his music. And, very important, he has not ended up at a courthouse on King Street (or anywhere else) or a place with rolls of barbed wire on Spanish Town Road (or any similar place).

However, there is this sense that Assassin has not solidified himself as a top dancehall act with the hardcore, predominantly male Jamaican audience, that he has not gained those all-important ‘street creds’. Which is a nice way of saying that he has not earned the universal, unthinking regard of the herd, comprising people who may or may not be able to reason individually but collectively tend to be rather dunce.

I believe it stems from Assassin’s musical decision not to go to Harbour View, as well as not being outrageously violent or sexual in his lyrics, as well as his clean-cut physical image. Chances are, those things would be OK with those who feel themselves to be the dispensers of ‘street creds’ if Assassin was brown and uptown, but he is a youth from Kintyre side and so it is not.

And therein lies the disconnect between Assassin and flawed concepts of what it takes to be a man – which is, for me, a good thing, because the ways in which a man is perceived to be a real man that Assassin has not ticked the required boxes are absolute rubbish.

So he did not take on the Kartel clash, Spragga Benz having a jolly good time with a couple songs in his protégé’s honour (“a could a me fren yu a try diss”), and there are those who would say Assassin should have. For what? To end up well past Harbour View in Morant Bay? To get entangled with someone who, if what the police say is to be believed, had very little need to make a career out of music, as astonishing a lyricist as he is? To exchange salvos with a deejay who, as good a writer as he is, does not understand the nuances, wit and finesse of a clash and, in the void that lack of comprehension creates, goes to the extremes of crassness and crudity?

If Assassin had gone that route, it would have long been forgotten who started it. He would have been seen as someone trying to rival Kartel, which he was and is not. And he could have easily engaged in the clash.

Remember, he got the name Assassin from the lyrical slaughtering he did as a kid in informal deejay battles.

However, by the flawed concept of manhood, as a youth from an inner-city background, Assassin should have blazed into the clash without thinking of his future, then spend a good deal of his life explaining that “bway, is a time inna me life when me did jus’ haffi do whe me haffi do, zee me, but yu done know man a man an’ now me tell de yute dem fi learn from my mistake, zee me, an no do whe me do.” Then he should have faced down the challengers who would have come out of the woodwork to make a name for themselves and end up with a very limited music catalogue. Damn dunceness.

Plus, to earn those street creds, Assassin should have done a couple things to end up in a courthouse. He should have a period in his career when he went to lyrical extremes to shock people and then miraculously reformed and then be able to point back to that period and say “trus’ mi, mi did bad y’know star, but man change now, zee mi.” Damn dunceness.

An example to all

For, in the flawed concept of manhood, a person with a penis and testicles is supposed to go bad and hurt a lot of people then, later in life when he has done irreparable damage to others and himself, miraculously reform. By then, many times, it no longer matters. As an artiste and a human being off the stage, Assassin has chosen to skip that phase (or maybe it came earlier in his life) and there are those who simply can’t understand it. Because in their experience, a man simply has to go through a phase of self-defeating behaviour and general almshouse, then make a great public turnaround in his life.

How Assassin has conducted himself is an example that this does not have to be so and, for his troubles, he shall not get any street creds.

Me? I say gwaan yute, yuh tough like yuh Riverstone Buss Dem Head freestyle mixtape. How can I not rate a man who did Same Thing Again (“People block de road an a defen dem rights/Yu can hear all a de struggle inna dem voice”)? Listen to how he holds the shell images in ‘Shell’; how he sums up daily life struggles in last year’s Day In Day Out (“Mi jus’ lose mi work, but mi nah lose di faith”); his critique of materialism (I don’t have the lyric right, but it goes something like “yu drink three Guinness a day, bills 20 fi one/By month end come a bout couple gran/A yu a talk bout yu aint got no money”). Check out how he summarises the salaried poor’s income and expenditure cycle in Hand To Mouth; the humour of Jamaicans’ tendency to not be punctual in Late; his dismissal of silly behaviour in Eediat Ting Dat; the song in which he bigs up the men who get the Enfamil and Pampers (can’t find it right now, for the life of me).

And the man no play to declare things straight in Pree Dis and Dem Guy Deh.

Integrity on and off stage

I could go on and on. I are a fan long, long time (though nowhere as much as Sheldon Williams – hol’ yu big up) and is not many deejays I are can say dat bout. It is off stage as well. The man is committed to his family, has pursued tertiary education and does not make the headlines for almshouse.

Which is probably why he does not make the headlines that much, because it look like is payola and passa passa run di ting. Damn dunce dem. I remember watching him perform so many times and, at the end, he would ask the audience members to put their hands in the air if he did well, and I always thought this is a man who believes he will not get his just due in reports on the show. And, from his intros threading a story through the performance and his genuine deejaying ability, he is very good. And unafraid. In the much earlier part of his career, Assassin hit the Rebel Salute stage at about 5 a.m., in Port Kaiser and, as a youth, he did not back down.

Funny thing is, Assassin was operating in a mode conducive to corporate alignment before it became a dominant model for artiste earnings in Jamaica. So now that it has, he is very well positioned. He will never have to be embarrassed to have his children hear his music, live or recorded. And those who talk about ‘street creds’ jus can’t see it.

PS: I don’t think I have ever interviewed him. He does not know what I look like. A no fren’ an’ pay fa ting dis. Dis cyaa pay fa. De payola man dem cyaa write like me. De artiste dem whe payola mek cyaa write like Assassin. Bun a duncehead.