GATFFEST 2015 in two cities - Submissions from all continents except Africa 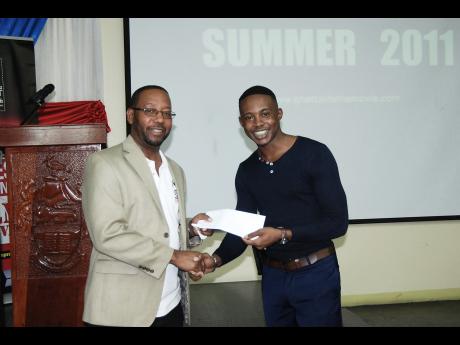 Barrington Flemming
Ian Boxill (left), professor of management studies and director of the Centre for Tourism and Policy Research at the UWI, Mona, accepts a sponsorship cheque from Alisteer Nelson, domestic sales manager at Sunset Beach Resort and Spa, at Friday’s launch of GATFFEST 2015. The function was held at the UWI’s Western Jamaica Campus in Montego Bay, St James. 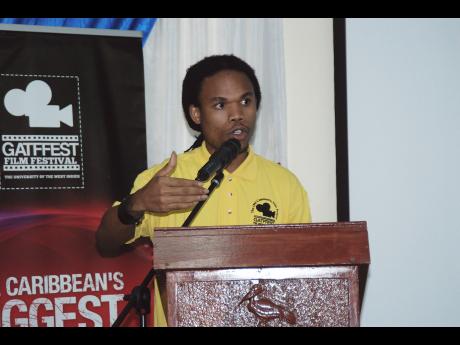 Barrington Flemming
Kadeem Wilson, who has a major role in the film Ghetta-a Life and is brand ambassador for GATFFEST 2015, speaks at the event's on Friday at UWI's Western Jamaica Campus in Montego Bay, St James.
1
2

On Friday, the Centre for Tourism and Policy Research of the University of the West Indies (UWI), Mona, launched the Greater August Town Film Festival (GATFFEST) 2015 at its Western Jamaica Campus (WJC) in Montego Bay, St James. The film festival is to be held from June 25-28 jointly in Montego Bay and Kingston.

Dubbed "the biggest community film festival in the Caribbean" GATFFEST, which was initiated in 2012 in August Town, St Andrew, serves as a platform to showcase films produced by underserved communities participating in the UWI's Community Film Project.

Activities during the four-day event include film workshops and screening of local, regional and international short films, along with an awards ceremony. June 26 is slated as Film Day in Montego Bay.

Ian Boxill, professor of management studies and director, Centre for Tourism and Policy Research, indicated that 72 film submissions have been received so far from inside and outside Jamaica. The entries reflect not only the diverse cultures of and entertainment fare from those countries, but their way of life.

"We have a wide cross sections of films from drama to animation, comedy, sci-fi, documentaries ... . It is really diverse. Films have been submitted from all continents except Africa , so we have a good variety," said Professor Boxill.

He expressed optimism that just over 20 students from western Jamaica will be trained in filmmaking at the WJC in the upcoming school year.

Kadeem Wilson, GATFFEST brand ambassador and who plays a central role in the feature film Ghett-a-Life , said while persons such as Usain Bolt and Tessanne Chin have helped the world to be in tune with Brand Jamaica, the principals in the filmmaking industry keep "missing the boat".

"There are so many projects, film projects, that we have missed the boat so many times in getting it to be shot on Jamaican soil. For example Home Again, which is an entirely Jamaican script and entirely Jamaican, but it was not shot here. It was shot in Trinidad and Tobago. So you understand the concern, the concern is that so many times you have a major project that is authentically Jamaican, it is not being shot here, " said Wilson.

He said local film industry stakeholders need to bring in experts from overseas to give them insight on how to develop the Hollywood look, improving the cinematography and audio. Wilson said that GATFFEST is a move in the right direction.

"I am very proud of GATTFEST and very happy to be a part of this initiative. It has really shown us that we need to come together and hold our industry in our hand and walk with it and get everyone engaged and involved," said Wilson.

Acting director of UWI, WJC, Patrick Prendergast, said the community film project has provided the campus with another opportunity to develop the region's intellectual capacity and empower the youth.

"We are always very delighted to be part of these events. Certainly it helps us to move closer and deeper into these communities," he said.