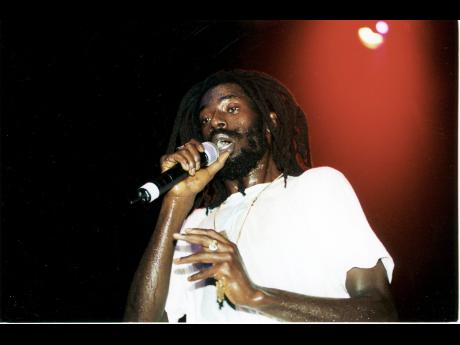 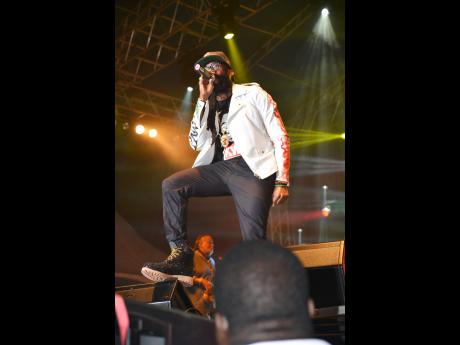 File
Tarrus Riley in performance. “Jimmy and Tarrus Riley have a song in which they say, ‘dancehall is the people’s church’. It is. For a long time, dancehall expressed the disapproval of homosexuality which it got from the Bible in the ultra-violent language of the Old Testament,” writes Mel Cooke.
1
2

WARNING: This edition of Music and More with Mel could be particularly dangerous to your sense of well-being. You will find yourself either overly irritated or enthusiastic, maybe concurrently. You will find yourself cheering or booing, maybe consecutively. These extreme vacillations are not good for your heart. However, despite this warning, you will still, at least, begin to read this column today. And, if you finish, you will read it again, to more stable results.

I was in Courts on Constant Spring Road, St Andrew, in December when I saw it. There were two of the things, but one was especially itty. It wiggled up the steps to the store's upper level behind a store employee. It wiggled, it simpered, it held its handbag in the crook of an arm with the wrist especially limp. It preened and smoothed down its hair and revelled in an oddly bronze complexion and surreptitiously glanced around to see the effect on those who were around.

The costume was the same, but the persona totally different - deflated and different. Simply a person, different from me but certainly not intent on and failing to disrupt sensibilities.

The homosexuals and their supporters (I nearly said backers, but I am learning to behave myself) made at least two strategic errors in their push for acceptance which seemed to be working at the time but, in hindsight, set back their cause immeasurably. One was allowing the flagrant fops, including the youths at the gully in New Kingston, who were eventually largely exposed as just another bunch of criminals and rightly treated as such, to become the face of the gay population in Jamaica. The other was to hand over their cause to persons outside Jamaica, persons who I believe have got their mileage out of the Jamaican situation and moved on, after deepening and widening the chasm between Jamaica's homosexuals and the part of the population which rejects them in public.

I am old enough to have seen the pattern before, with the communism and capitalism proxy wars fought out in Jamaica, while the USA and USSR went unscathed, despite their build-up of arms. And I understand that there needs to be a most homophobic country in the world for the activists to point to, much as Israel needs Palestinians to be terrorists and George Bush needed Saddam Hussein. Jamaica literally volunteered for the job, with some of its dancehall lyrical output.

But, you see, it was never dancehall that was at the root of anti-homosexuality in Jamaica. It was always God. If I had a dollar for every time I heard a deejay refer to Leviticus 20:13, I could probably match the highest Super Lotto jackpot. There has been so much focus on the chorus of Buju Benton's Boom Bye Bye that the God side of the tune has been insufficiently analysed (there is a pun in that, too). It is in the part where he says:

Now, however, we are in the post-Boom Bye Bye era. Buju is in prison in the US, and the conspiracy theorists as well as some more rational folk are convinced there is a connection. The artistes who there were protests against are largely not touring places where their concerts can be picketed by gay activists. Randy Berry and Todd Larson visited Jamaica and the mandate of seeping gay reform is now clear - something which the deejays were saying was the real objective all along, not shopping hate music.

I have always felt that the youths in New Kingston were kept in place by persons within the gay community who despised them but wanted them there as an example to the rest of the world how much homosexuals are despised in Jamaica - which, in many cases I know of personally, is simply not true. Neither were the raft of murders which were supposed to have been happening in Jamaica. Les Green, one of the British policemen who came to work in Jamaica, said publicly when he was leaving that in all the gay-killing cases he knew of in Jamaica, it was gay-on-gay murder.

Nobody called him homophobic.

Jimmy and Tarrus Riley have a song in which they say, "dancehall is the people's church". It is. For a long time, dancehall expressed the disapproval of homosexuality which it got from the Bible in the ultra-violent language of the Old Testament. Then there was the incident with Professor Brendan Bain last year and some church people flexed their muscles in a very small way outside the University of the West Indies, Mona's gates, and then in Half-Way Tree.

The dialogue changed completely from the lambasting of dancehall. And now there is going to be more dialogue, as the gay-rights agenda gathers pace in this post-Boom Bye Bye epoch.

The youth Christian organisation Love March Movement made its opinion on Berry and Larson known. It is a struggle I would advise dancehall to stay out of. Your voice would be a distraction. How strident is the Church (and here we are talking about not just the traditional houses of God, but the preachers who harass and harangue) against homosexuality? Let who want to wash feet do so.

I heard a recording of one screeching pastor in Coronation Market on a Saturday morning. He said something like, "You hear wey dem name? ... You hear how it close to maggot?"

I cringed. No one else I saw did.

Those who are intent on not just banning a few easily identified deejays are going to find that Jamaica is a damn difficult place to change from the top down. Can you imagine from the bottom up?

OK, I am out of space for this week. At it again next Thursday. I will probably include the most extreme positive and negative responses.