Rasta in J’can music since ska 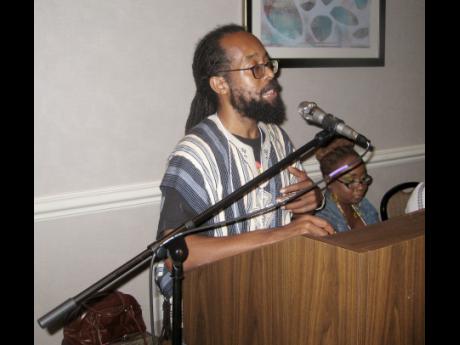 While the connection between Rastafari and reggae is now so commonplace as to be taken for granted, at the recent Caribbean Studies Association (CSA) conference in New Orleans, USA, Dr Michael Barnett traced the link back to pre-Independence.

"I argue that Rastafari has influenced Jamaican popular music since 1959," Barnett, who lectures at the University of the West Indies (UWI), Mona Campus, said in making his presentation at the conference.

This places the beginning of the connection in the ska era and Barnett gave two versions of ska's development. One story says Clement 'Sir Coxsone' Dodd called a meeting with musicians including Cluett Johnson and Ernest Ranglin. Wanting to give the music he was producing a more original sound, they were asked to do a recording session the next day. The result was Easy Snapping, sung by Theophilus Beckford.

Another version says that Rosco Gordon's No More Doggin', with "a classic example of the off-beat style", came out in the early 1950s.

"It is reasonable to assume that this influenced Dodd," Barnett said. Prince Buster, who was employed to Dodd, left him in 1959 and wanted a new sound to play in order to challenge Dodd and rival producer Arthur 'Duke' Reid.

pulse of the people

Buster therefore sought out Oswald 'Count Ossie' Williams in Wareika Hills. "He knew that the Rastafarian sound carried the pulse of the people and he considered himself a man of the people," Barnett said of Buster.

Shortly after Easy Snapping was released, Oh Carolina, with vocals by the Folkes Brothers came out, with hand drumming led by Count Ossie, a prominent Rastafarian influence. With Oh Carolina's strong off-beat, Barnett said, "a case can be made for this song being more authentically ska than Easy Snapping."

"Rastafarian influence was present from the birth of Jamaican popular music," Barnett said. There was "a bind between Rastafari and the Jamaica music industry which is still in place today."

"Rastafari has always been attractive to the black working class and underclass - the sufferers," he noted.

Barnett went on to identify a number of early recordings with strong Rastafari content or done by Rastafarian artistes, among them Lion of Judah (1963), Carry Go Bring Come (1964), Beardsman Ska by The Skatalites and The Whip (The Ethiopians). He noted the Rastafari influence of The Skatalites, especially trombonist Don Drummond.

During the rocksteady era, Peter Tosh had Rasta Shook Them Up and Bob Andy did I've Got to Go Back Home. Then, Barnett said, "by the 1970s Rastafari took control of the music business."

Preceding this was a period when many musicians lived in Back-O-Wall (bulldozed to create space for Tivoli Gardens) and reasoned with Rastafari. "Even Duke Reid, who disliked Rastafari, ended up with Justin Hinds," Barnett said, also noting that "Dodd had a whole lot of Rastafari."

Among the individual performers Barnett identified from the 1970s were, Horace Andy, Bob Andy and Alton Ellis, along with the aggregations Mighty Diamonds, The Wailers, Wailing Souls, Black Uhuru and Sly and Robbie. In England, there were Steel Pulse and Aswad. He also noted the influence of the Twelve Tribes of Israel organisation, which embraced reggae.

"The 1970s marked the high point of the Rastafari influence in the music business," Barnett said.

Now, Barnett said, Rastafari is still present, though not as dominant as in the 1970s. "But it is still there and an important factor," Barnett said. Among the notable Rastafarian entertainers in dancehall are Sizzla, Capleton, Queen Ifrica and Tarrus Riley.