Ward Theatre to close out KOTE 2015 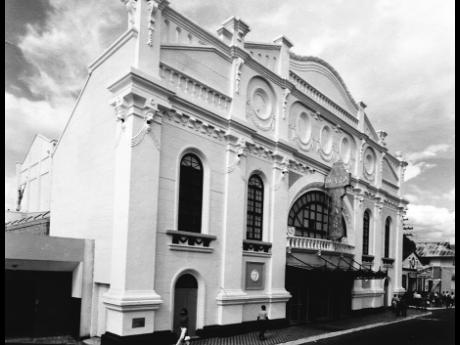 After years of being closed to the public, the Ward Theatre in downtown Kingston was last year reopened to the public for a one-night benefit concert put on by the organisers of the annual Kingston on the Edge Urban Art Festival (KOTE).

This year, the historic theatre will again be open to the general public when it will serve as the venue to close out this year's KOTE schedule of events.

The concert, dubbed 'Opera Meets Nyahbinghi', is set for June 28 and will feature a number of Jamaica's top classical artists, including Jon Williams, Peter Ashbourne and Steven Woodham. They will share the stage with Chilean mezzo-soprano Maria Cecilia Toledo and veteran reggae guitarist Earl 'Chinna' Smith's Inna Di Yard All Stars roots ensemble, in what the organisers describe as a marriage between classical music and reggae.

Speaking with The Sunday Gleaner, co-founder and organiser of KOTE, Enola Williams, said the Ward Theatre was again chosen as one of 31 venues to participate in this year's festival because of its rich historic and cultural legacy.

"Through our 'Ward Theatre Project', KOTE 2015 has chosen to highlight the Ward Theatre as one of our 31 venues throughout Kingston during the 10 days of the festival," she said. "While the Ward is still in a state of disrepair, we are very happy to note that there has been increased attention given to the space over the past year. Jamaican businessman AndrÈ Card has been volunteering to keep the Ward clean, and the CHASE Fund, a long-time supporter of the space, recently renewed its support."

She also revealed that the mayor's office has also come on board with the project and has been integral in fixing the electrical wiring, plumbing and fumigation of the space.

"There are numerous indivi-duals who are helping in efforts to bring this space into a functional performing arts space, and we welcome support from those who feel the space is worth restoring."

The Ward Theatre was donated to the city of Kingston by Colonel C.J. Ward in 1912, and was declared a national monument in January 2000. In times past, the Ward Theatre played host to the greatest talents from across the globe, while also serving as the platform for some of our most outstanding local talent, including Sir Willard White, Louise Bennett, and Garth Fagan. It also hosted the annual pantomime for many years before it fell into a state of disrepair.

Thirty-one events at parks, galleries, bars and restaurants will transform Kingston into the Caribbean's art capital for the 2015 installation of KOTE, which runs from June 19-28 under the theme 'Transitions'.