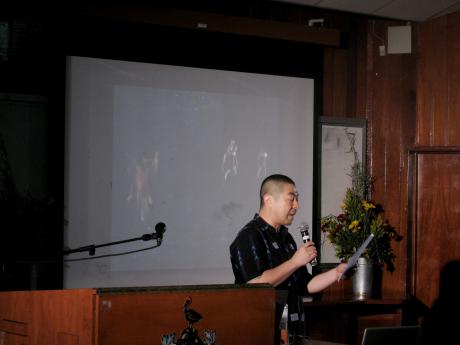 Mel Cooke
Peter Chin during his presentation, before going into dance. 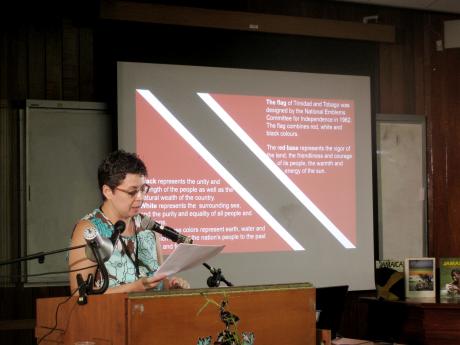 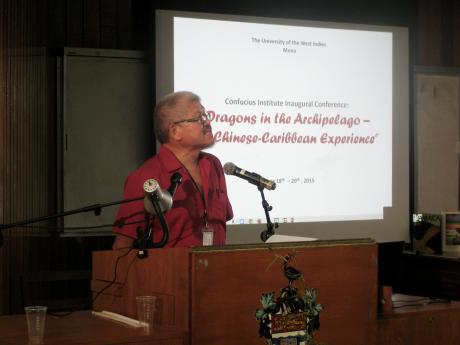 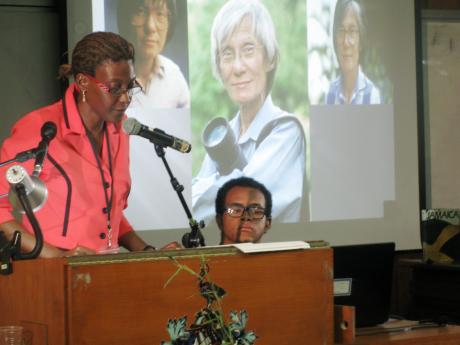 Mel Cooke
Lisa Brown (at microphone), lecturer in the Department of Literatures in English, UWI, Mona, does a presentation on photographer Ray Chen (whose pictures at various stages of his life are on the screen) at the Neville Hall Lecture Theatre on the campus on Saturday, during the inagural Confucius Institute Conference. 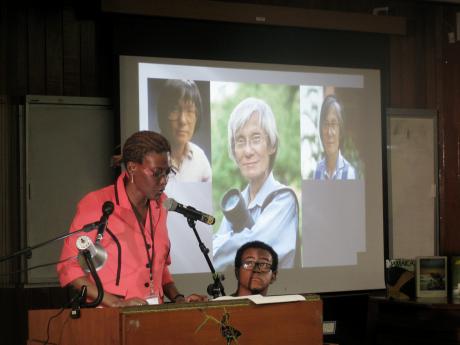 On Saturday, analysis of the Chinese impact on the Caribbean continued at the inaugural Confucius Conference at the University of the West Indies (UWI), Mona Campus. The conference's theme was 'Dragons in the Archipelago - The Chinese-Caribbean Experience', and the Saturday mid-morning panel in the Neville Hall Lecture Theatre focused on 'Artistic and Cultural Production Among the Chinese in the Caribbean'.

Photography, art, language, and a riot were on the cards in the session hosted by Dr Courtney Hogarth, Jamaican director of the Confucius Institute. Lisa Brown, lecturer in the Department of Literatures in English, UWI, Mona, focused on the photography in her presentation 'Coffee, Tea and Ray: Reading Ray Chen's Photography as Self-Portraiture'. Using images and textbooks from Chen's coffee table books, Brown said the books "signal a personal engagement with national identity". And, she noted, the identity project is important for any group considered minority or outside the mainstream.

With her intention being to do an autobiographical reading of Chen's essays, Brown's presentation included not only the images of the photographer included in the book, but was more an analysis of images in which Chen was not present. In these images, among them photographs of boys at a doorway and on a handcart, as well as tourists on a beach, Brown found Chen's presence in colours and other elements, as well as in the framing of the photographs.

Brown referred to a 2004 interview in which Chen was asked what he would do if he was stranded on a deserted island. He said he would turn the camera on himself to show that he was there. "Yes, Ray, one love. We see what you mean," Brown said.

Dr Nina Bruni from UWI, St Augustine, informed the audience about the work of Carlisle Chang in a paper co-authored with Dr Lancelot Cowie. Covering a two-decade period, she looked at 'The Contribution of Carlisle Chang to the Artistic Development of Trinidad and Tobago'.

It is extensive, including design of the twin-island republic's flag and coat of arms in the immediate pre-Independence period to the huge mural - The Inherent Nobility of Man - at the airport but destroyed in a 1979 renovation. "He became depressed and bitter," Bruni said.

Bruni and Cowie felt it important to acknowledge Chang's work as "he is practically forgotten in his country", even though The Inherent Nobility of Man was recreated by one of his followers.

Chang's images of everyday Trinidadian life such as Flying Kite were part of the discussion as were his creations for carnival. And his scope of thought was Caribbean as Bruni said "the same questions of regional identity are showing in his work from 40, 50 years ago".

Dr Victor Chang, a retired lecturer from the UWI, Mona, looked at 'The First Anti-Chinese Riot of 1918'. "People know about 1965 but not so much 1918," Chang said. Importing the Chinese as a buffer between the whites and blacks was a deliberate strategy, and considering previous events in Guyana and Trinidad, Chang said, "We could argue that these riots were a long time coming."

Buffer or not, there was sexual contact between especially Chinese men and black women to the extent that the 1943 census included the category Coloured Chinese. Sexual tension played a central role in the riots of July 1918 centred in St Catherine and eventually spreading to three other parishes.

Many sides to a story

Chang recounted and critiqued different versions of the initial incident, all around an affaire between a policeman and the black partner of a Chinese shopkeeper, who returned unexpectedly to catch them. This resulted in the policeman being beaten and rumoured to have been killed, sparking the riots.

There was laughter at points in Chang's presentation as he questioned versions of events in sardonic style, as well as recounted that at one place during the riot, as Chinese-owned shops were attacked, flour, cornmeal, and salt littered the road.

One possible motivation for the riots was that in the process, the records of debt could be destroyed.

Stefan Poon Ying of the UWI, St Augustine, did his presentation 'The Phoneme Inventory of Cantonese in Trinidad' via audio-visual link, which worked well, his image projected on to the screen in the lecture theatre with him getting feedback from the audience.

In the afternoon session, Peter Chin preceded his dance with the paper The Jamaican Chinese Current: Streaming Through Fluid Identity, retired Deputy Principal of the UWI, Mona, Joe Pereira, moderating the session.

The conference closed with remarks by chairman Dr Courtney Hogarth, a review by Dr Julian Cresser, and thanks all around by Dr Paulette Ramsay.