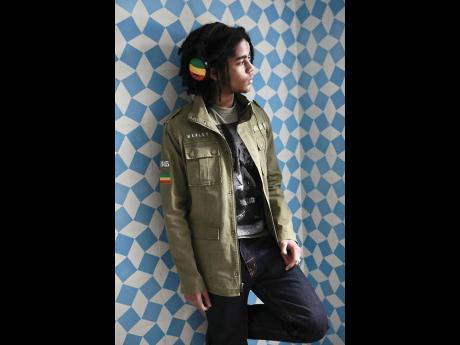 After sharing the stage and recording with Grammy-winning reggae artistes Damian and Stephen Marley, Bob Marley's grandson Skip Marley has decided to launch his solo career as a full-fledged recording artiste and musician.

Skip Marley's new project, Cry To Me, was recently released and is already getting attention in various media outlets. The self-produced track is meant to empower women, much like his grandfather's largely popular single, No Woman Nuh Cry.

"I produced Cry To Me. I just love music and I play instruments. So I picked up the guitar and Cry To Me came like that. I was enduring some personal stuff and also things that I see going on in the world with women, yu nuh, society issues," Skip said.

More music for the year

The artiste is also looking to release his debut EP by the end of 2015.

"I am working on my EP and the next song will be called Crystal Clear. I haven't decided on a name for the EP as yet, but it will be out this year," he said.

Skip Marley, the son of Cedella Marley, will also embark on the United States Catch A Fire tour this year along with Tarrus Riley, Morgan Heritage, Damian Marley, Stephen Marley and Black Am I, among others.

The artiste says despite rubbing shoulders with other established artistes from the Marley family, he does not take the privilege for granted, noting that he plays his role in creating quality music.

"They are family, but I respect them in their craft and I respect their professionalism and as such, I act in a professional manner. I aspire to be the best I can be. They give me a lot of knowledge and advice. My uncle Stephen worked on the dub remix for Cry To Me, and uncle Damian is supposed to do something on it as well," he said.

Skip says his music is influenced by a variety of genres. However, reggae music will always be in the mix. A music video was recently premiered for the single, Cry To Me, and has already received over 100,000 views on YouTube.com. The video is currently in rotation on Hype TV and RE TV.

"The name Skip comes from my grandfather, so my mother decided to name me Skip. You don't have too much people name Skip, so it's easy to remember. My style of music is positive message, very conscious and about being awake. Some days I get reggae vibe, rap, jazz... I just do music," he explained.

Skip Marley's career progress can be monitored via his social media pages @SkipMarley1 on Instagram, @SkipMarley on Twitter and http://www.facebook.com/SkipMarley.