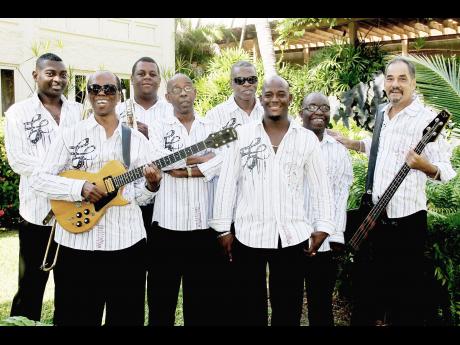 Party and Play Like Back in the Day is at the Countryside Club, Half-Way Tree, tomorrow. The gates will be open from 9 p.m.

While patrons are having a good time, they will also be contributing to a worthy cause by supporting Kevin Cooper on his transformational journey at the Braille Institute in California. Kevin, nephew to popular musician Grub Cooper of Fab 5, recently lost his sight to glaucoma. His mother, Sandra Cooper, professional facilitator and trainer, has been hosting this event for the last three years, to underwrite the cost of this expensive venture and in order to assist Kevin on the road to achieving independence.

Kevin's struggle with visual impairment began shortly after birth, when he was diagnosed with cataracts in both eyes. Even after three surgeries, his childhood and young adult life were spent struggling with the emotional and psychological challenges of growing up with low vision.

In 2003, he developed glaucoma, and without obvious symptoms, the condition went untreated, resulting in vision loss in one eye. Glaucoma is a particularly dangerous condition that has no cure. However, careful and diligent treatment can slow down its effects.

The St Andrew Home for Girls, an outreach project of the St Andrew Parish Church, will benefit from two performances of the Deh Jah Dance Theatre at the Little Theatre tomorrow and Sunday.

The girl's home on Ellesmere Road, Half-Way Tree, was founded in 1974 and continues to serve girls in need of care and protection as determined by the juvenile court and the Child Development Agency.

Since 2004, Deh Jah Dance Theatre has won 14 gold medals and other awards in the annual JCDC Festival Competition. This year's performances will be the dance theatre's sixth season of dance entitled Vibrations. Tickets are available at the Little Theatre, online at yardticket.com or by calling 298-6398.

Corporate Transport Services Ltd will provide transportation from Kingston to the Portland Jerk Festival on slated for Sunday, July 5. The company's Corporate Express bus service is also the official carrier for the Miss Jamaica World contestants to and from the event, to be held at the Heritage Site at Folly Grounds in Port Antonio.

Patrons will be able to park their vehicles at the Corporate Express office, Oakland House, 5-7 Hagley Park Road, Kingston 10, while they are shuttled to and from the Portland Jerk Festival. The transport company has put in place special arrangements to accommodate comfortable travel to what is known to be the largest annual jerk and food festival in Jamaica.

The festival has also partnered with the Jamaica Urban Transit Company Ltd (JUTC), which will be offering round-trip transportation. More information is available by calling 1-888-CALL-JUTC.

Visitors are invited to participate in a dance session with the artistic director at Ryddim Life Studios, who will teach participants how to make rhythms with their bodies. Live performances by dub poet Abbebe Payne will then follow. A viewing of the movie, The Harder They Come, starring Jimmy Cliff, will be screened for the adults, while an open mic session will be offered to children to share their poetic talents.

Visitors can enjoy free access to exhibitions from the Natural History Museum of Jamaica and National Museum Jamaica. Children will be especially interested in Institute of Jamaica's latest exhibition, the Junior Exhibition for Art and Craft in Schools, which showcases the creative talents of students from primary and preparatory schools across the island.

South Planet, a new global database to connect members of the cultural arts throughout Africa, Caribbean and Pacific countries, has been launched, and a Jamaican has the franchise for the Caribbean region. He is Wayne Sinclair, co-founder of GSW Animation Limited, one of the local pioneering companies in animation.

Sinclair noted that South Planet (www.spla.pro) was set up with funding from the European Union and the African Caribbean Pacific (ACP) as a platform to link members of the visual and performing arts, music, and literature. These include promoters, singers, dancers, musicians, writers, event coordinators, technicians and publicists from ACP countries

Sinclair - who was part of a nine-member steering committee from eight different countries selected to 'seed' and launch the website between June 2012 and 2015 - noted that already more than 40,000 artistes and art professionals, 5,000 entertainment venues, 30,000 organisations and individual service providers in the arts have listed their services on the site.

Sinclair encouraged all Jamaican artistes to take advantage of the opportunities South Planet affords, free of cost, to promote their skills and to make connections with support services throughout the three continents.(WAYNESINCLAIR....)

Merritone Music plays at Sea Bell Resort on Sunday as part of a series of regular end-of-month activities there. The ambience provided at Sea Bell Resort, with the sounds of the waves crashing on the shoreline, the splashing noise of persons wading in the river or having the choice to just spend the time relaxing by the pool.

Patrons will have the opportunity to sample teas and porridges courtesy of EG Wellness Brands and True Brew Coffee courtesy of Jablum's True Brew Instant Coffee. Media partners are KoolFM and StylzFM while a live stream of the evening's activity will be done by Reggae to Reggae TV & Radio.

It encourages planting and ways to take care of Mother Earth, nutrition from farm to table and reading by providing schools with books and footballs.

The foundation members of Reggae group Home-T have regrouped to present the new CD Send Come Call We. It is produced and arranged by the legendary Mikey 'Mao' Chung and backed by the original Now Generation Band.

This goes back to the roots of their career. Home-T's entry into the music business was a self-produced song Mr Fire, written by co-founder Junior Gentles on their own Home-T Label. Many singles followed on the Mushroom Label - a cover of the pop hit Stop Children, Dedication (written by the legendary BB Seaton) and a cover of The Wailing Wailers Soul Shake Down Party.

On their own Junjo Label came Irons in the Fire, Mystique, Love Oh Love and Dance a Sweet Kind A Music.

The last two songs allowed them to be finalists in the 1978-79 Festival Song Competitions. Then came a reworked version of Soul Shake Down Party on Phonogram Records, which was released in Europe.

All these singles were produced by Mikey Mao Chung and assisted by Home-T.

In 1988, had the hits Who She Love and Don't Throw it All Away on the Jammys Label, then on the Music Works Label they had Holding On, Pirates Anthem, and Single Life.

Some of these songs were done in collaboration with Shabba Ranks and Cocoa Tea. In 2006, the album Stronger Now was produced by Mikie Bennett and Home-T at Grafton Studios. (HOMET)

NGJ and KOTE to launch The Way Home

The National Gallery of Jamaica's Last Sundays programme for June 28 is being staged in association with the 2015 Kingston on the Edge (KOTE) urban art festival. The programme will feature special tours of the 'Explorations 3: Seven Women Artists' exhibition and the launch of the poetry collection The Way Home by Millicent A.A. Graham.

The Way Home, published by Peepal Tree Press, is Graham's second poetry collection and will be introduced by the critically acclaimed poet and novelist Velma Pollard, who is a retired senior lecturer and former Dean of the Faculty of Education, UWI Mona. This will be followed by readings from the collection by the first lady of Jamaican theatre Leonie Forbes, fellow poets Jean Binta Breeze and Yashika Graham as well as Millicent Graham.

Graham is a fellow of the University of Iowa's International Writing Programme (2009) and was awarded the Michael and Marylee Fairbanks International Fellowship to Bread Loaf Writer's Conference in 2010. Her first poetry collection, The Damp in Things, was published in 2009, also by Peepal Tree Press.

Our Journey of Faith will present a rich tapestry of religious music genres, from Haydn's The Heavens Are Telling to Quincy Jones' Hallelujah Chorus and revivals such as Fly Away Home to Zion. The Portmore Chorale is conducted by Delroy Williams and accompanied on piano by Karen Henry, both of whom have been with the chorale since its inception. Other musicians are pianis, Denise Williams; guitarist Lewis Campbell and drummer, Odean Taylor. Special guest vocalist will be tenor Rohan Jacques, cast member of Father Holung and Friends, and the choreographer is Robertha Daley, known for her work with the Tivoli Dance Troupe.

Tickets for Our Journey of Faith are available from members of the chorale or at the concert venues. For more information, contact Karen Henry at 815-8440 or email: kmonique64@hotmail.com.