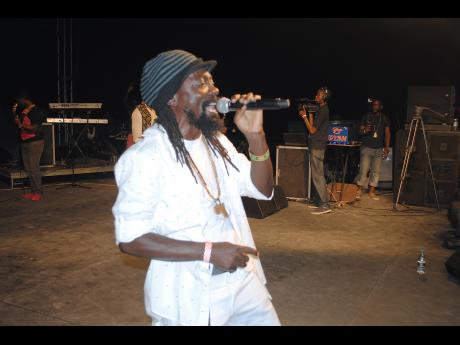 Following a one-year absence, the Portland Jerk Festival made a grand return on Sunday at Folly Oval, Port Antonio, and jerk and entertainment lovers received a spectacular treat.

Jerked-food cravers sampled the many delicacies, including pork, chicken, rabbit, lamb, fish, lobster, beef, and goat, all prepared in authentic fashion, With the many prizes given by sponsors The Gleaner/STAR and Digicel still fresh in people's minds, the spotlight switched to the much-anticipated stage show.

Veteran Leroy Sibbles, formerly of The Heptones, kick-started the show with a series of hits, including Book of Rules, Party Time, Pretty Looks, Why Did You Leave and Gonna Fight. Sibbles' exit, however, was short-lived as the near-capacity crowd begged for his return. They were not disappointed as the singer delivered a high-class act.

Mystic Revealers came and went as clearly, the audience was out of touch with their songs. This left local boy and and reggae/dancehall artiste Louie Culture to do damage control, which he did excellently.

Clad in a white suit, dreadlocks bouncing with the cool breeze blowing across the picturesque Folly ruins, Louie Culture came on stage at about 8 p.m. He started with Bogus Badge, which had the crowd in a frenzy as patrons sang and danced.

A barrage of hits followed, including Gangalee, Excellence, No Gal, Malfunction, Grab Yuh Lass, Don't Get Weary and Tune In before he exited the stage.

With the crowd pleading for more, Louie Culture returned with Battle Field, Rudie Don't Fear, Salute Ghetto Youth and Foundation From Birth before doing a new single about legalising ganja a cappella.

By the time he got to Nanco, clearly a favourite of the crowd, Louie Culture was quickly led off by the MC as the show was nearing its cut-off point.

Voicemail's many dance moves created some impact on the obviously bored crowd, which was impatient with the group's lengthy performance.

Guest artiste Bounty Killer, who closed the show, hit the stage round about 10:30 p.m., starting with Mystery, Anytime and Poor People Fed Up. The Warlord managed to up the tempo after a rather uninspired performance by Voicemail. However, he had the deck stacked against him as tired patrons started to exit the venue at a rapid rate.

The all-day, incident-free 2015 Portland Jerk Festival was brought to a close shortly after 11:15 p.m.