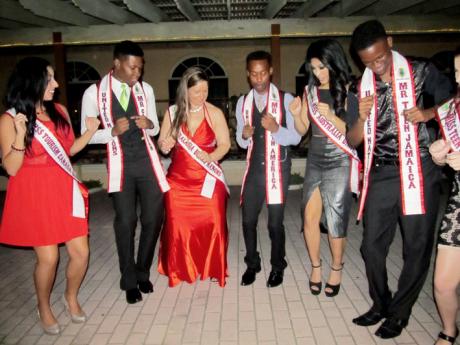 Marcia Rowe
Jamaican male delegates to the 2015 United Nations Pageant teach female entrants a Jamaican dance at the welcome pary for the entrants, held at The Knutsford Court Hotel, New Kingston, on Sunday. 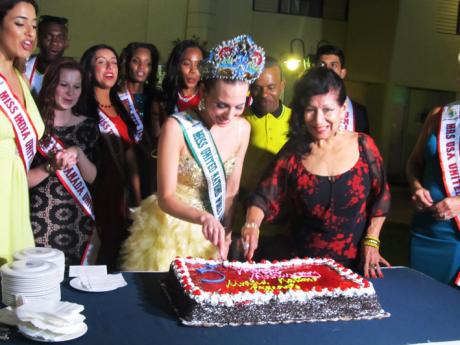 Marcia Rowe
A cake is cut to officially launch the 2015 United Nations Pageant. 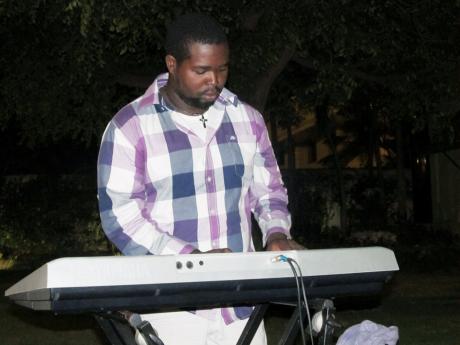 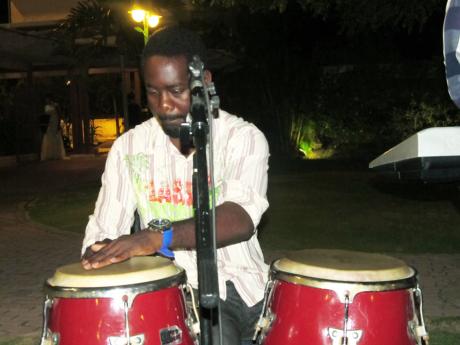 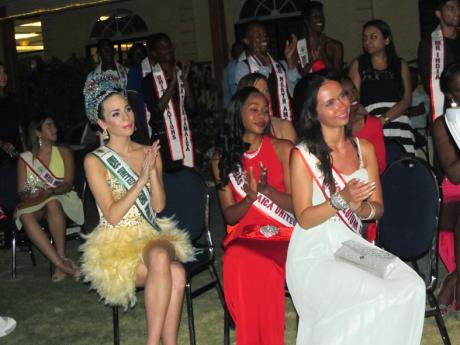 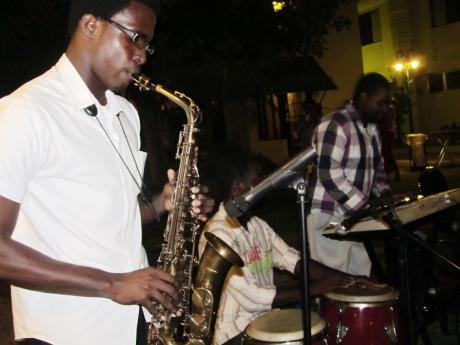 Jollity permeated the lawns of The Knustford Court Hotel, New Kingston, on Sunday evening during the welcome and meet and greet party for delegates to the 2015 staging of the five-year-old United Nations (UN) Pageant. The Jamaican and international

delegates were treated to local dishes served buffet style, while being entertained with live and recorded Jamaican folk and reggae music.

The delegates, wearing red and white sashes, who came from as far as Australia and Nigeria, also got the opportunity to individually share information about themselves. In doing so, they painted a montage of a wide range of ages, backgrounds and professions, along with their areas of interest.

Despite the global representation, however, Leon Williams, president of the UN Pageant, told The Gleaner, "We are not United Nations; we are independent of that organisation." The pageant is a private entity.

The first three stagings of the event were held in Miami.

"It is an international brand, so we built it in the US for the past three years ... . We started the international campaign to build the brand up. It is very difficult to build a new brand in Jamaica without corporate support and sponsors on board, so what we did was to go to the US, get the brand established, get the countries involved and then take it back to Jamaica to promote our culture and our tourism sector," Williams explained.

The pageant is not the typical beauty competition. There is no age limit and each country can enter more than one delegate in various categories - Miss, Ms, Mrs, Miss Teen, Mr and Mr Teen. Neither, should it be described as a beauty pageant.

"The pageant is not about beauty. It is about serving with a purpose and the contestant has to do their charity in order for them to enter the United Nations Pageant." Williams said.

"It is not a swimsuit pageant. It is based on charity and community service and they (the delegates) have to do hours before they actually qualify to participate in the pageant. We adopt the programme and ask them to go into the homes and into the schools and get involved from there. Our main focus is dedication and to reach the less fortunate," he continued.

And so, it is only natural that after Sunday's party, which included the cutting of a cake, the delegates will be exchanging fancy clothes for practical ones, as they will be rolling up their sleeves to continue the painting of the Robert Lightbourne High School in St Thomas today. This project was started in November in conjunction with the Jamaica National Foundation.

Tomorrow, the group will change gears and venue as they visit the Jamaican Christian Boys Home in New Kingston for a cook-off. According to Williams, representatives of each country will have to cook a national dish or something associated with the country. The 22 boys at the home will be the judges.

For the 2015 UN Pageant World Finals on Saturday, July 18, at the Courtleigh Auditorium, the contestants will be judged by an international panel.

Since the pageant's inception, Jamaica has not held one of the crowns. However, Williams believes that "we are looking to be in a good position this year to at least have two. We have scouted and marketed, and it is going to be an entertaining battle to see who will win".