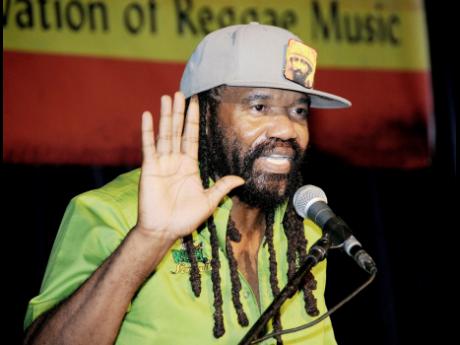 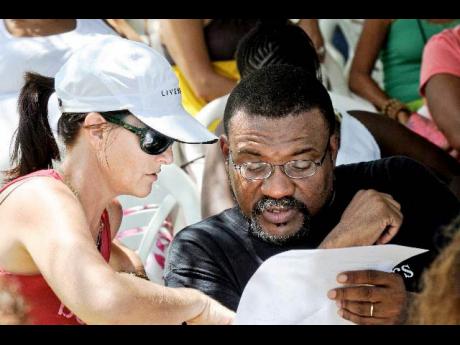 Justine Henzell (left) and Kwame Dawes in discussion at a previous staging of the Calabash International Literary Festival.
1
2

Although I did not go to Reggae Sumfest this year, I had a vague feeling of nostalgia last week. It was not because I had covered Sumfest for close to a decade or so consecutively, then another year or two earlier this decade, but because the MoBay festival has special significance in my engagement with Jamaican popular culture as a journalist.

My first entertainment assignment 15 years ago was Reggae Sumfest 2000. I had moved to Montego Bay in February that year to be with my wife. Our first child was born later that month, and I was still writing two columns for The STAR.

I went to an Internet café a couple times to submit my articles, then wondered why I was spending the time and money when there was a Western Bureau.

So, without knowing anyone, I went there, said what I wanted and went in. The first (and only) familiar face I saw was Jenni Campbell's and she smiled and asked me one question: "So you ready for us now?"

And I became employed to the bureau as a freelance features writer, a totally unexpected development as I had resigned from full-time employment at 7 North Street.

One of the columns I was doing was the entertainment-focused Beyond The Hype, which Claire Clarke (Clarke-Grant, these days) had me start writing in the late 1990s, in-between chasing myself and Dwayne Gordon with a ruler over a certain 'ear-raising' matter.

Then, when Sumfest 2000 came around, Adrian Frater was putting the team of reporters together and said something like "Mel, you nuh write entertainment column? Come een, man."

And that, with the kindness of those three persons, was how I started writing about entertainment, mainly Jamaican popular music, which had fascinated me from before I was 10 years old.

Dancehall came to me at our home below Wilmington, St Thomas, from across the valley at Spring Garden, where the single street light I could see (no electricity on my side) was also the beacon for a sound system that captivated me, as I stood on the back verandah in the darkness. I could hear the people, too, live and direct.

But it was not only the latest rockers (Yellowman was huge at the time, not least of all because he had been large in the parish on Aces sound system) that came at me. Since there was no television, radio was the electronic media source. It was only two stations, too, on the AM frequency, RJR and JBC with a little Spanish in-between them on a good night. (Heck, I've been listening to Allan Magnus and Barry G since I was going to Lyssons All-Age, and Ceebert was the joker of weekday mornings, with Colgate Cavity Fighters Club on Saturdays).

Through them, I got exposed to an excellent variety of popular music - from the soul of Percy Sledge to the latest tunes on the Top 10 charts which both stations carried (on Fridays, I believe, with the Top 100 for the previous year in January). It influenced me to the extent that one of the first cassettes I bought was a Skatalites collection, with Don Drummond on the insert - that was when Sonic and Dynamic were putting out some white cassettes with black or blue writing on them.

Then I went to Munro College and got into sound-system cassettes - Stitchie and Wolfman on Stereo One, Papa San on Creation, Ninja Man on Jaro, Admiral Bailey, Shabba and Major Worries on Jammys, the Stone Love juggling, and my all-time favourite Silverhawk among them.

At the University of the West Indies, dancehall came to me at the Students' Union or we went to it in August Town and House of Leo, primarily.

I was well steeped in Jamaican popular music, then, by Sumfest 2000, which I did not realise was the start of something that would last this long and I have had a whale of a time, although I do not go out nearly as much as I used to. Which is a pity, because it was my favourite thing.

Over the 15 years, I have developed an affinity for a couple events and venues - though not Sumfest. I have a special regard for Rebel Salute as an event which is owned by a practitioner, which has grown from a sound-system event to a two-day international festival. More than that, my first encounter with Tony Rebel was memorable.

Herbert 'Jah Wayne' McKinnes, a man with whom I made many trods across western Jamaica, and I drove from MoBay to Port Kaiser, although there had been a foul-up and we had not got any tickets. We made sure to get there early. At the VIP entrance, I saw Tony Rebel, with whom I had never spoken before, in full camouflage outfit, pacing back and forth like a promoter under serious event-day pressure. I told him the situation, he listened, and told someone "dem two man say them is from Gleaner. Check dem ID and if is so, let them in," and walked away.

It was my first of many Rebel Salutes.

I also went to the first Calabash International Literary Festival in Treasure Beach, St Elizabeth, not because I was interested in all that was happening, but Professor Edward Baugh was one of the readers and I had to hear Truth and Consequences (one of the very few poems I have attempted to memorise) live. I did and ended up going to Calabash for almost 10 years straight. It became an annual trek for my family, although we have not gone since 2010. The festival's producer, Justine Henzell, has got to be one of the world's most organised persons. Persuasive, too.

In Kingston, I have to pay special regard to Redbones Blues Café, which has remained committed to live music, before it made its so-called return and will be, I suspect, after some of those who have hitched their wagons to the fad have faded.

All in all, it adds up to some great memories. Next week, Part Two - with less of the maudlin meanderings and more of an analysis of what has changed for the better or worse in a decade and a half.