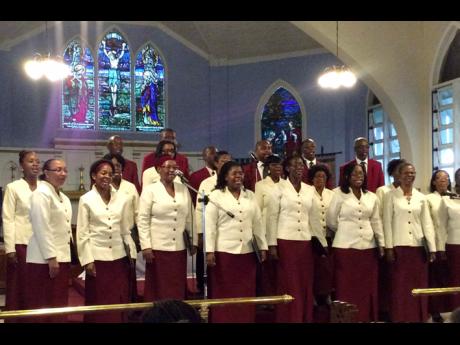 The 30-year-old Portmore Chorale ended its local summer concert series, dubbed 'Our Journey of Faith' on Sunday at St Margaret's Church in Liguanea, St Andrew, having performed in Falmouth and Portmore on previous weekends. Among the patrons' remarks were they "enjoyed every minute of the concert", were "glad they came" and "left on a high".

The closing evening's programme was hosted by the delightful Audrey Williams and the guest performer was tenor Rohan Jacques, whom Williams dubbed 'Mr Smooth' because of his powerful, but soulful, delivery. Some of the highlights of the varied programme were Haydn's The Heavens are Telling and Quincy Jones' Hallelujah - A Soulful Celebration. These saw patrons standing and rocking with the chorale, as well as when they did the always popular folk and revival medley.

The contraltos however, almost stole the show when they performed the reggae gospel hit More Than an Ordinary Servant in the second half of the concert.

The Portmore Chorale is led by its founding conductor, Delroy Williams, and founding pianist, Karen Henry. Other musicians are Denise Williams on keyboard, Lewis Campbell on guitar and Odean Taylor on drums. The group was choreographed by Robertha Daley, who trains the Tivoli Dance Troupe.

The Portmore Chorale will once again take its music ministry to Atlanta, Georgia, where it was warmly received in 2013, and will be performing in Stone Mountain, Decatur and Lawrenceville from July 31 - August 2. The group will also be the special guest performers at the the Atlanta-Jamaica Association's Independence service and returns to Jamaica on August 5.