NDTC serves up a cheerful evening 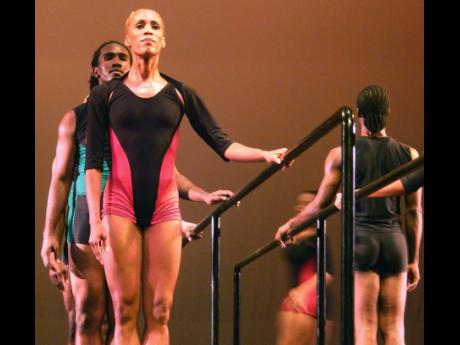 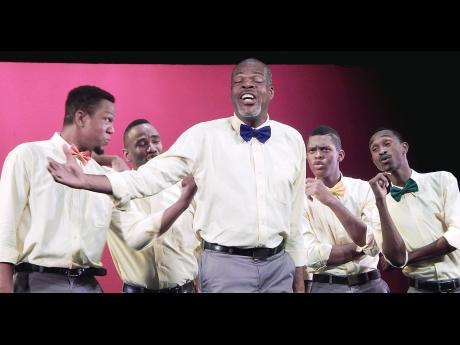 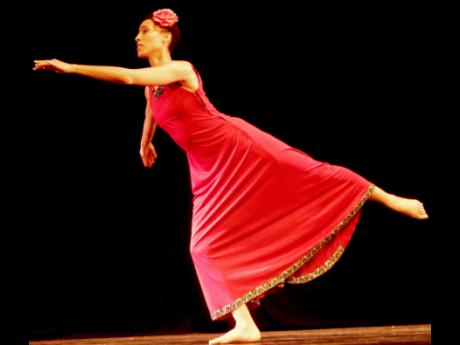 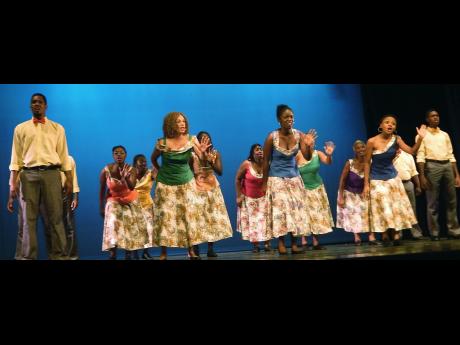 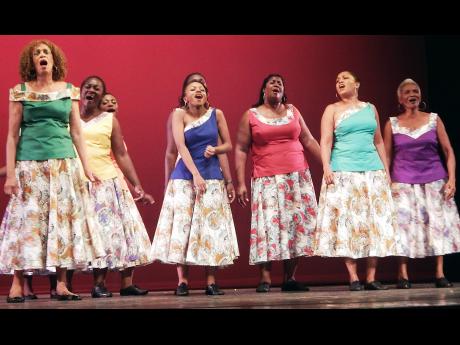 Saturday night's fare served up by the National Dance Theatre Company (NDTC) at the Little Theatre, Tom Redcam Avenue, was generally cheerful. Exceptions to that mood were to be found in two dances, 'Dialogue for Three' and 'Don't Leave Me'.

The cheerfulness began with the first item, 'Drumscore', a revival of a 1979 dance choreographed by the late Rex Nettleford. Huge conga drums painted on the backdrop are the picture that catches your eye as the curtain opens.

A tall figure, barely distinguishable in the dim light, is up stage chanting. Later, you make out Earle Brown, one of the NDTC Singers; others are on the right apron accompanying him with traditional songs. Two drummers make more music from centre stage.

The dancers who come on over the next 15 minutes or so are colourfully clad. Red dominates, but there is also lots of blue, and the women wear multicoloured head ties.

With much shaking of hips, high kicking, and dashing on and off, as well as around, the stage, the dancers suggest in the first movement that all is wonderful. Though the second movement begins with more seriousness, and with a hint of preparation by the men for a battle of some sort - though it's not clear if they're going hunting or fighting - the upbeat energy soon returns and the dancing ends with the dancers strutting around shouting, "Hoi!"

The entire company takes part in 'Drumscore', but only three return for the next dance, 'Dialogue for' 'Three (Nettleford)', which tells the story of a love triangle. Marisa Benain danced the role of the wife, Kevin Moore was the husband and Maia Pereira was the mistress.

All poignantly portrayed the emotions which inevitably arise in that situation - anger, frustration, desire, anxiety, love. The husband swings like a pendulum between the two women, unable to choose, right up to the end.

Up next were the NDTC Singers, who switched the mood right back to "happy". The women's outfits - bright floral skirts and tops of green, gold, blue and orange - were as delightful as the voices.

As they sang, the Singers danced and moved around the stage, giving as much visual as aural variety. The songs, all sung to a bouncy beat, included Perfidia, Gonna Get Along Without You Now, Free As a Bird in A Tree, and Sweetie Come Brush Me.

Unscathed, choreographed by Troy Powell, the only new dance for the evening, closed the first half of the programme. Powell, one of two guest choreographers for the NDTC's 53rd season (the other is former Company member Shelly Maxwell), has an impressive biography,

From the printed programme, we learn that the native New Yorker began his dance training at nine with The Ailey School. After graduation from a performing arts high school, he joined Ailey 11, and later the Alvin Ailey American Dance Theater. He toured the USA, South America, Europe and South Africa for 10 years, then became a master teacher of Ailey 11. He has created ballets for numerous schools and companies and danced with even more.

Choreographed to music that rises to great emotional heights, 'Unscathed' is an equally powerful work. Though it does not have characters or a storyline - like 'Dialogue for Three', for example - it has many moods and dramatic moments. The quick shifts in pacing and group sizes help to keep the audience interested.

Hands play a big part in this dance: they lift skyward, swoop down, spread outward and drift down in a semicircle. In the final minutes, the entire cast is onstage, swirling into and out of established groupings, and as the dance ends, all fall flat on stage. Blackout!

Oneil Pryce's 'Bare Talk' (2006) is fast-paced work basically showing what dancers can do at the barre. They do a lot: run at, or from, it, dash under, hang from, stand on or beside, rest against, et cetera. They rarely stop, and when the dance is over, the audience is almost as breathless as the performers.

Mark Phinn was fluid and full of anxiety as he danced around a long, low bench placed up stage. His musical accompaniment was a French song with a title translated as Don't Leave Me. Phinn's perfectly controlled body mirrored the singer pleadings.

Many in the audience would have seen Phinn perform the dance many times. It's a popular NDTC work. So is 'Kumina', which has been ending NDTC dance concerts on and off since 1971 with dynamic dancing and exciting singing.