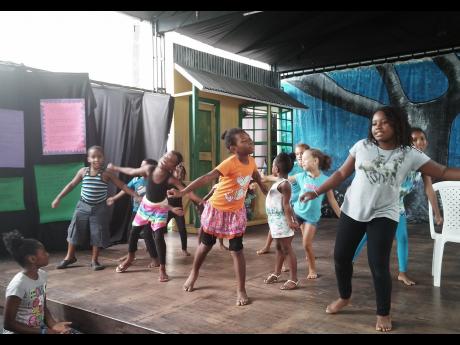 Contributed
Highlights from the Rights of the Child Summer School and the staging of ‘HUSH’ children’s musical, which took place at The Ashe Centre recently.

Although it got off to a late start, guests who recently turned out for HUSH, the children's musical, waited patiently, and by night's end, it was clear why.

Produced by the ASHE performing arts group, the show held at the Vibes Theatre on Cargill Avenue (the home of ASHE) was a fitting end to their annual summer school programme, as the children put on a show guests will not soon forget.

There was no denying the talent on display inside the venue. The ASHE members and the summer school participants captivated the audience from the opening number to the closing piece. As the parents in the audience watched their sons and daughters sing, dance and act, they beamed with pride, and whispers from the audience suggested that some were even surprised at how talented their children were. The production looked at the stories of three families coming into an understanding on children's rights and captured the essence of edutainment. The creative arts were used to school patrons on the challenges children face when they are denied basic human rights.

Sundari Lynch and Le-Vein Moore, aka Xylophone, were among the night's standout performers. Both young females stood out as their performances surprised and impressed the audience. Packing some serious vocal ability, they delivered memorable performances that left the audience talking about them even after their stint onstage had ended, some saying that both acts had bright futures ahead of them.

The first half of the show featuring the children was awesome, and guests would have been satisfied just seeing their children come alive onstage. However, ASHE had more in store, and after intermission, guests were treated to an entertainment package that truly was the icing on the cake.

On display in the second half of the show were the new faces of ASHE. Boldly declaring that "when music hits, you feel no pain", the group thrilled the audience with a medley of songs. Hitting every note, the group performed their versions of some of Jamaica's most popular reggae and dancehall hits, including Marcia Griffiths' Dreamland, Dennis Brown's Should I, and Beenie Man's World Dance, among others, much to the audience's delight. There was something in the performances for everyone. Patrons enjoyed the group's selections so much, that they could no longer remain seated. The power of the music moved them out of their seats and had them dancing along to every beat. When it all ended, the audience showed their appreciation with a standing ovation.

Executive director Conroy Wilson and summer school coordinator Marlon Tomlinson thanked persons for coming out and encouraged them to spread the word about the summer programme, as they hope to expand in 2016.