Stories told at Tribute to the Greats 18 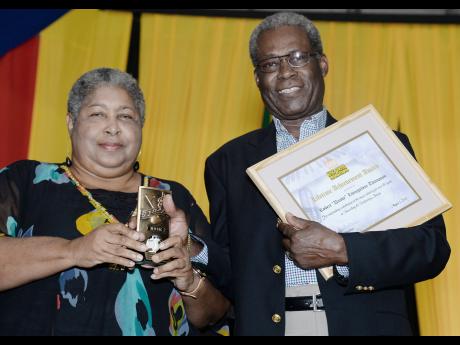 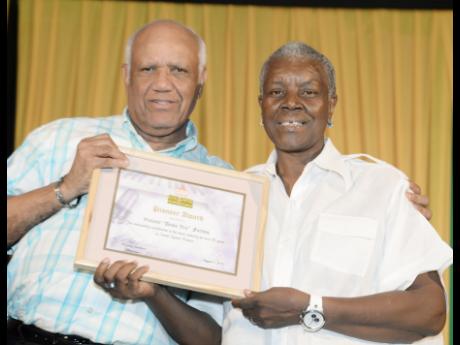 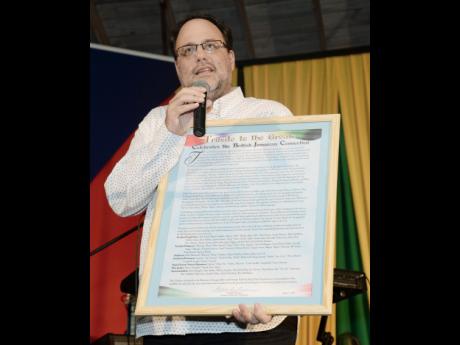 Jermaine Barnaby
Senator Mark Golding responds to the award for the British Connection, which he received on behalf of Minister of Foreign Affairs A.J. Nicholson. 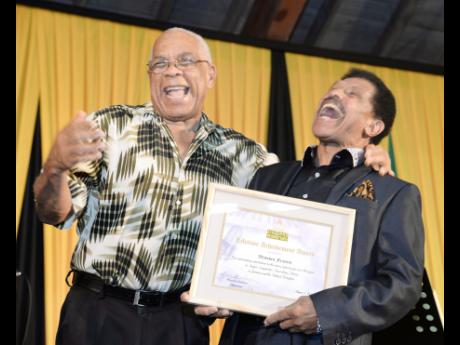 File
Minister of Transport Dr Omar Davies (left) and Winston Francis share a joke after Davies presented Francis with his award at Tribute to the Greats 18, held at the Chinese Benevolent Association, Hope Road, St Andrew, on Saturday night. 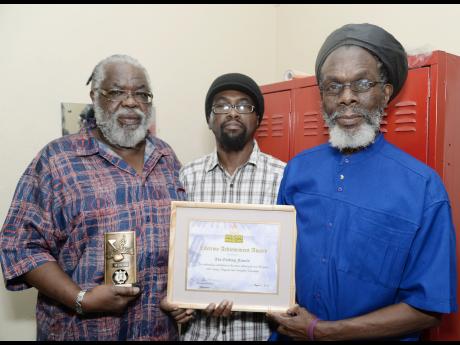 Jermaine Barnaby
Members of the Golding family George (left), Noel (centre) and Steve with their award for Swing Magazine at Saturday's Tribute to the Greats 18, held at the Chinese Benevolent Association, Hope Road, St Andrew. 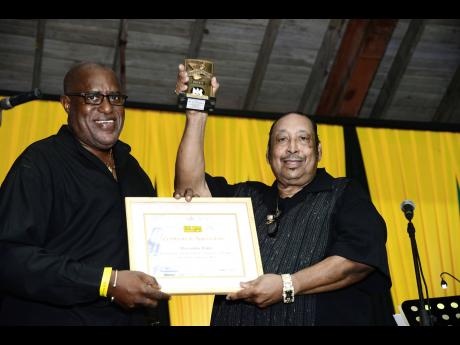 Jermaine Barnaby
Singer Barrington Biggs (right) holds up his Tribute to the Greats Award, which was handed over by Colin Leslie, at the Chinese Benevolent Association, Hope Road, St Andrew, on Saturday night. 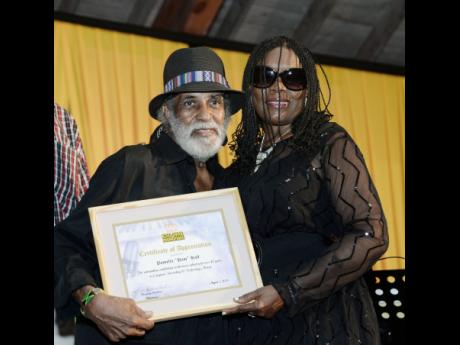 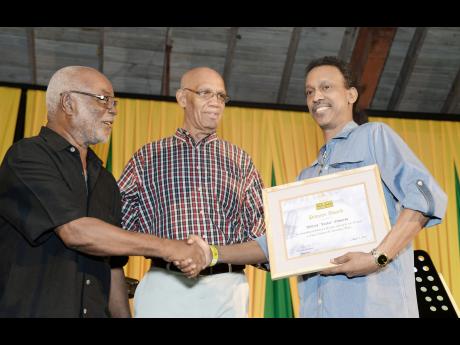 Each citation at Tribute to the Greats 18, held at the Chinese Benevolent Association, Hope Road, St Andrew, on Saturday night was a compressed tale of the life of someone who has contributed to Jamaican popular music. Apart from what was written and read by MC Norma Brown, though, there were also the anecdotes that came up during some presentations.

And since the 2015 staging of the event was dedicated to honouring the British Connection with Jamaican popular music, some of the finer details were about the migration experience. So, after Patsy Forbes received the award on behalf of her father Vincent 'Duke Vin' Forbes, Tribute to the Greats organiser Kingsley Goodison of King Omar Promotions interjected to say how Vin got to England.

Appropriately, the following award was to Winston 'Count Suckle' Campbell, who operated two clubs and was credited with popularising ska to the British underground. He went to England with Duke Vin, so Goodison quipped that he was another stowaway, adding that he was the first black man to own a club in England.

One recipient was not able to speak personally, so Sonny Roberts's wife responded on behalf of the man who started out building speaker boxes in England and ended up owning his own sound system and studio. Mrs Roberts said that Sonny had it hard in England and, although he is a cancer survivor, kept going with her standing by him all the way.

In reading the citation to the Golding family for Swing Magazine Norma Brown said that poetry by Allan Hope appeared in the publication, asking the audience if they knew Allan Hope. No one said Mutabaruka.

Two of the awardees, who doubled as performers, gave the audience additional information during their singing stints. Pam Hall noted that there was a time in the mid-1980s when there was a strong set of Jamaican songs on the British charts, naming herself, her sister Audrey, Bloodfire Posse, Sophia George and Boris Gardiner among the performers.

And Winston Francis, a very energetic performer, brought up the issue of unpaid royalties, but not in an angry way. Before doing the hit song, Francis said "in 1968 I wrote a song called Mr Fix It. I love Coxson (Clement Dodd), but I never received a single penny. I have no hard feelings. He told me I will get my due," Francis said.

He did, from a British connection. Francis said in 1997 a group in England recorded Mr Fix It. He got a royalty cheque for £37,000 and that is how he bought his first house.

That group was UB40.

Others honoured at Tribute to the Greats 2015 were Wilfred 'Jackie' Edwards, members of the audience remembering Tell Me Darling, Robert 'Dandy' Livingstone (who also performed), Dennis Alcapone (his award received by John Bird, who read a message from the deejay) and Barrington Biggs (another of the show's performers) and Chris Blackwell, Brown reading career highlights for Laurel Aitken, Owen Gray and Milly Small.

Senator Mark Golding stood in for Minister of Foreign Affairs AJ Nicholson, receiving a tribute to the British Connection in general. After an extensive citation detailing the connection's genesis and many of the persons who have been a part of it (including some of the night's awardees), Golding said thanks to Kingsley Goodison.

"When you hear the long, long list of talent that left Jamaica, went to the UK and changed the face of the music industry in the UK and the world, it is fitting that the Ministry of Foreign Affairs, as the link between Jamaica and the outside world, should collect this award," Golding said.